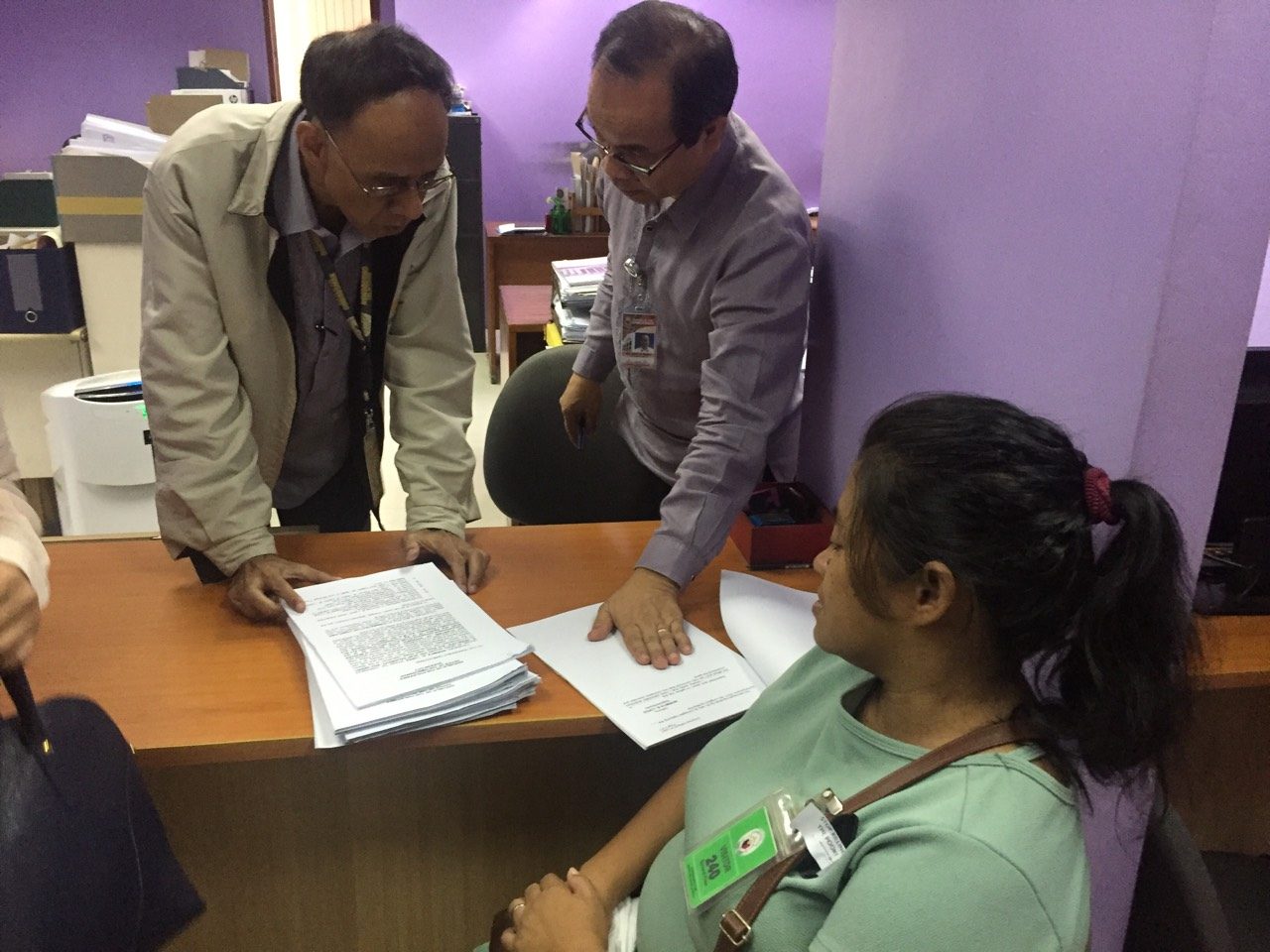 MANILA, Philippines – Parents of two men who were killed during police operations filed murder complaints before the Office of the Ombudsman on Thursday, September 28, against Manila cops, alleging extrajudicial killings and citing inconsistencies in police reports.

Normita Lopez and Denisse David, mother and father of Djastin Lopez and John Jezreel David, respectively, filed the complaint with assistance from lawyers of the National Union of People’s Lawyers (NUPL).

A prayer vigil facilitated by a priest was conducted in front of the Office of the Ombudsman on Thursday.

Djastin died on May 18 at the hands of cops in an operation by the railway in Tondo, Manila.

Autopsy results show Djastin died from too many gunshots to his upper extremity and other parts of the body. He sustained 5 gunshots to the chest and stomach, and 1 shot to the arm.

Complaints of planting of evidence and administrative complaint of gross misconduct, grave abuse of authority, gross oppression, and conduct unbecoming of a public officer were also filed against the police officers. (READ: Witnesses name Manila policeman behind drug-related summary killings)

According to the complaint, Djastin parted ways with his mother afternoon of May 18 in the area. Afterwards, Normita was told that cops had killed her son.

In the sport report filed on May 18, the cops said they shot Djastin because he was wanted for the killing of a certain Michael Turla Panganiban. Other police reports would conflict with this, however.

In a report filed before the MPD’s Crime Investigation and Detection Unit dated May 14, the suspects in the killing of Panganiban did not include the name of Djastin.

In a June 9 PNP progress report, the cops said the operation that killed Djastin was a buy-bust operation, contrary to police claim on May 18 that Djastin was a suspect in a murder case.

(There’s no proof to their statement that my son shot it out with the cops. First, my son doesn’t own a gun, so it’s impossible for him to have brought out a gun and fight.)

Jezreel, also from Tondo but working in Pasay City, went missing on January 19 after he clocked out of work at 9 am. His father Denisse said he looked all around for his son from January 19 to 20. (READ: Tokhang victim files murder charges vs cops)

On January 21, he was told by barangay officials that two men, one of whom had details that matched his son’s, were jailed in MPD’s Station 11. His inquiries led him to the MPD headquarters in Manila, where he was directed to proceed to the Cruz Funeral Parlor.

After repeated pleadings with the funeral parlor owners, he was finally able to confirm through a cellphone photograph that one of the dead bodies there was his son.

According to the spot report dated January 21, Jezreel was killed 11 pm that day along Del Pan corner Lara Street in Binondo Manila. Three men supposedly fought back and were eventually killed. They were found with 3 types of guns, 5 sachets of shabu, and a P500 marked money.

Denisse’s affidavit notes that in a progress report filed by the police, they said they were only able to identify the 3 men on January 23. However, newspaper reports published on January 22 already named Jezreel and his companions. (READ: Despite fear, more families file EJK complaints)

Jezreel’s real name is John Jezreel David, and the two other men who died were George Yap and Kim Alyson Ocenar.

(John Jezreel sustained many gunshot wounds, which caused his death. He sustained many injuries, wounds, and bruises in different parts of his body, that tell you he had been beaten up before he was killed.)

Complaints of murder, planting of evidence, and the same administrative complaints were filed against Gutierrez, Pelayo, Barnedo, Pring, and Lacson.

In February, MPD Station 11 filed drugs and frustrated murder complaints against Jezreel and the two others. On March 7, 2017, the City Prosecutor of Manila junked the complaint.

Denisse also said Jezreel had text messages to girlfriend Regina Evangelista, telling her of the repeated incidents of him being apprehended by police from Station 11 in their checkpoint in Binondo. These apprehensions happened whenever he went to and from work, and was asked for money.

Denisse has also filed a case before the Commission on Human Rights (CHR).  – Rappler.com