Hontiveros, Aguirre face off in Senate hearing over alleged wiretapping 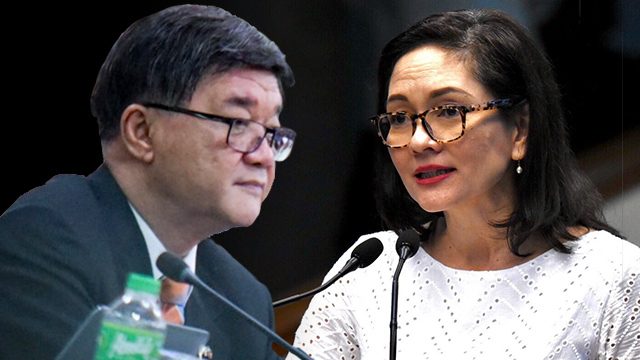 Facebook Twitter Copy URL
Copied
'One of the cases was filed with a prosecutor under his jurisdiction. The conflict of interest is clear. This is a conspiracy hatched by Secretary Aguirre to expedite the filing of cases against me,' says the senator in front of Justice Secretary Aguirre

MANILA, Philippines – Senator Risa Hontiveros and Justice Secretary Vitaliano Aguirre II faced off during a Senate investigation into the killings of minors on Monday, October 2.

Aguirre went straight to the Senate after filing 3 counts of violation of Republic Act 4200 or the Anti-Wiretapping Law against Hontiveros before the Pasay City prosecutor. (LOOK: Aguirre caught texting to ‘expedite’ cases vs Hontiveros)

During the hearing, Aguirre claimed he was “targeted” by Hontiveros, following a photo that caught him texting former Negros Occidental Representative Jing Paras urging the latter to “expedite” the cases against the senator.

“Without my knowledge and consent, a so-called member of the media strategically positioned himself or herself with a complete vantage point. Not only was I targeted, I was subject of conspiracy,” Aguirre said.

Hontiveros, who was not in the hearing during Aguirre’s speech, later joined and confronted the DOJ chief for deflecting the public from the real issue of a justice secretary urging a private citizen to “expedite” cases against a sitting senator.

“This is a desperate attempt to deflect public attention from his text conversations, which caught him red-handed plotting against me. This is the real issue here. Secretary Aguirre was caught conspiring, instigating private indivuals to file cases against a sitting senator,” Hontiveros said.

“Huwag na tayo magpaligoy-ligoy pa. Sabi niya bibigyan nya ako ng magandang laban. Magandang laban o lutong macau?” she added. (Let’s not beat around the bush. He said he would give me a good fight. A good fight or a fixed decision?)

Hontiveros also questioned the propriety of Aguirre’s case, as it was filed before the Pasay City prosecutor under the DOJ.

Aguirre responded and claimed the text messages could not be used against him. He claimed the issue is the legality of recording or taking a photo of the text conversation.

“Senator Hontiveros, the issue is the violation of the Constitution and Republic Act 4200. That is the real issue. Publicizing the contents of my cellphone, which is a violation of my right to privacy cannot be used because it is inadmissible, it is as if it were non-existent. You can’t drag me into the issue,” Aguirre said in a mix of English and Filipino.

He then challenged Hontiveros to present the photographer who took the photo.

To date, Aguirre has neither denied nor confirmed the messages he exchanged with Paras. But after the senator’s privilege speech revealing the controversial messages, Paras has filed a complaint against Hontiveros before the Office of the Ombudsman.

Aside from the criminal complaint, Aguirre is also set to file an ethics complaint against the opposition senator.

At present, 3 of the 6 minority senators have been charged with ethics complaints: Senators Hontiveros, Antonio Trillanes IV, and Leila de Lima. – Rappler.com