Envoy insists on right of China to fish around Pag-asa 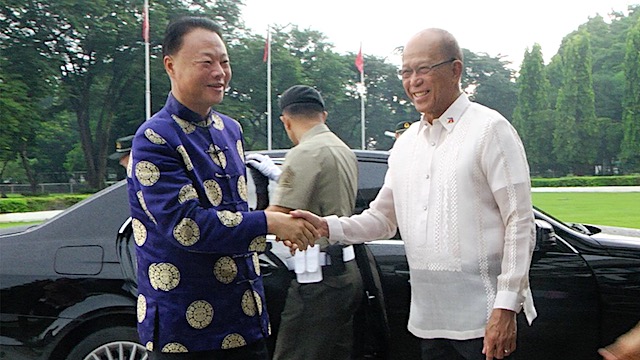 MANILA, Philippines – Chinese ambassador to the Philippines Zhao Jianhua insisted on the rights of the Chinese to fish near Pag-asa (Thitu)  amid protests against their presence around sandbars near the Philippine-occupied island in the West Philippine Sea (South China Sea).

“It’s quite natural to see some of the fishing boats to be there. They are carrying out their daily fishing. You don’t have to be alarmed. Both Chinese and Filipino side have a clear understanding of what they are doing,” Zhao added.

The ambassador said there was no cause for alarm because China was committed to a peaceful resolution of disputes. He said China would strictly abide by Article 5 in the Declaration on the Conduct of Parties in the South China Sea (DOC).

China, however, has violated the DOC when it reclaimed 7 reefs in the West Philippine Sea.

There were concerns that China was eyeing to occupy the sandbars near Pag-asa Island that have long served as traditional fishing grounds for Filipino fishermen in the island. A bamboo pole was reportedly planted on one of the sandbars to fly the Chinese flag, but this was later denied by the Philippine government. (READ: 5 Chinese ships spotted near Pag-asa sandbars)

Concerns about the presence of Chinese vessels were first raised by Magdalo Representative Gary Alejano in August. He again aired his concern on October 3 because the Chinese ships apparently didn’t leave the area around Pag-Asa Island.

Zhao said Chinese moves to sell or donate defense assets to other claimants in the South China Sea “demonstrates that China has no intention at all to settle it by force.”

He reiterated calls to look at the “bigger picture” when examining the relationship between the Philippines and China.

“We do have disputes. But we have to put it in proper context. I said repeatedly earlier. It only constitutes 1% of our overall bilateral relationship. We need to look at the bigger picture and focus on friendship and cooperation,” he said.