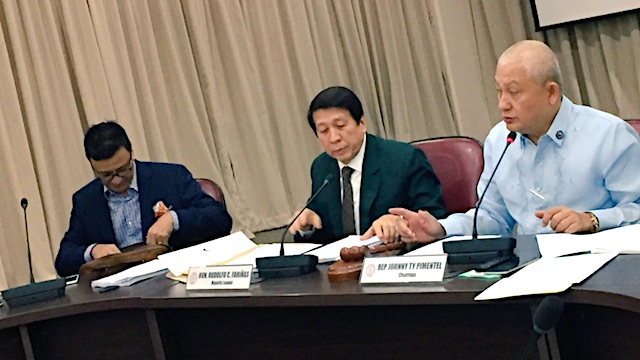 MANILA, Philippines – His signature appears in various documents linked to the development of the Paoay Museum but top heritage expert Eric Zerrudo insists he had no idea he had gone into a deal with the provincial government of Ilocos Norte.

Instead, Zerrudo told a House panel, he was under the impression that it was a project initiated and fully funded by the Marcos family. (READ: Against rules, Ilocos Norte advances P26M cash for meds, fertilizer, construction)

Zerrudo made the assertions on Monday, October 9, as the House committee on good governance and public accountability continued its probe into the alleged misuse of Ilocos Norte’s tobacco funds under the watch of Governor Imee Marcos.

The probe has since expanded into checks on whether the funds actually reached tobacco farmers and the construction of the museum and Paseo de Paoay.

Deputy majority leader and Pampanga 4th District Representative Juan Pablo Bondoc noted that the documents attached to the project appeared to have been “cloned” from a project in Muntinlupa City, some 500 kilometers away.

Zerrudo’s signature, however, appears in several government documents linked to the project. Asked if the signatures were fake, the businessman said: “I think that’s obvious.” He denied submitting bid documents – even if the Ilocos Norte provincial government claimed Zerrudo’s business was the winning bidder.

Over P1.6 million was paid to Integrated Conservation Unlimited Incorporated, of which Zerrudo was listed as proprietor, for the “services for the development” of Paoay Museum.

Zerrudo did, however, admit to signing a Memorandum of Agreement with the family. Committee chairman Surigao del Sur 2nd District Representative Johnny Pimentel, questioned Zerrudo’s claim that he did not know it was a government-funded project. In the MOA, it was stated that the project was for the province.

“The idea that it was a family project was reinforced because I was paid in cash in the end. I would have been more inclined to believe it was a government project if I had a check from Landbank or PNB,” said Zerrudo.

He noted that the cash was delivered by Marcos herself and her “security team.”

The province’s Bids and Awards Chairman, Pedro Agcaoili Jr, said Zerrudo submitted eligibility papers, a claim Zerrudo denied. All these statements were made under oath.

Zerrudo noted that his views were “politically opposite of the principal,” referring to the Marcos family.

Since mid-2017, the committee has been probing allegations of anomalies in the procurement of vehicles by the Ilocos Norte provincial government. The investigation, which was prompted by a resolution filed by Ilocos Norte 1st District Representative Rodolfo Fariñas, has thus far revealed red flags in the provinces’ procurements.

The province had apparently made cash advances for the purchase of several vehicles, contrary to the Commission on Audit’s rules. The vehicles were apparently also purchased through Mark Chua, the governor’s long-time boyfriend.

There was also a price disparity between the supplier’s unit cost of the vehicles and the eventual cost declared in public documents.

The Marcoses is a political clan which calls Ilocos Norte its home. The late dictator Ferdinand Marcos hails from Sarrat in Ilocos Norte. His children and grandchildren have served various elective posts following their exile and eventual return to the country.

His only son, former senator Ferdinand Marcos Jr., tried but lost a vice presidential bid in the 2016 elections. He is contesting that loss.

Both the Marcoses and Fariñas are allies of President Rodrigo Duterte. – Rappler.com