Oct 11, 2017 2:02 PM PHT
Lian Buan
Facebook Twitter Copy URL
Copied
The petitions of the human rights lawyers are the most comprehensive in terms of coverage when it comes to challenging the war on drugs 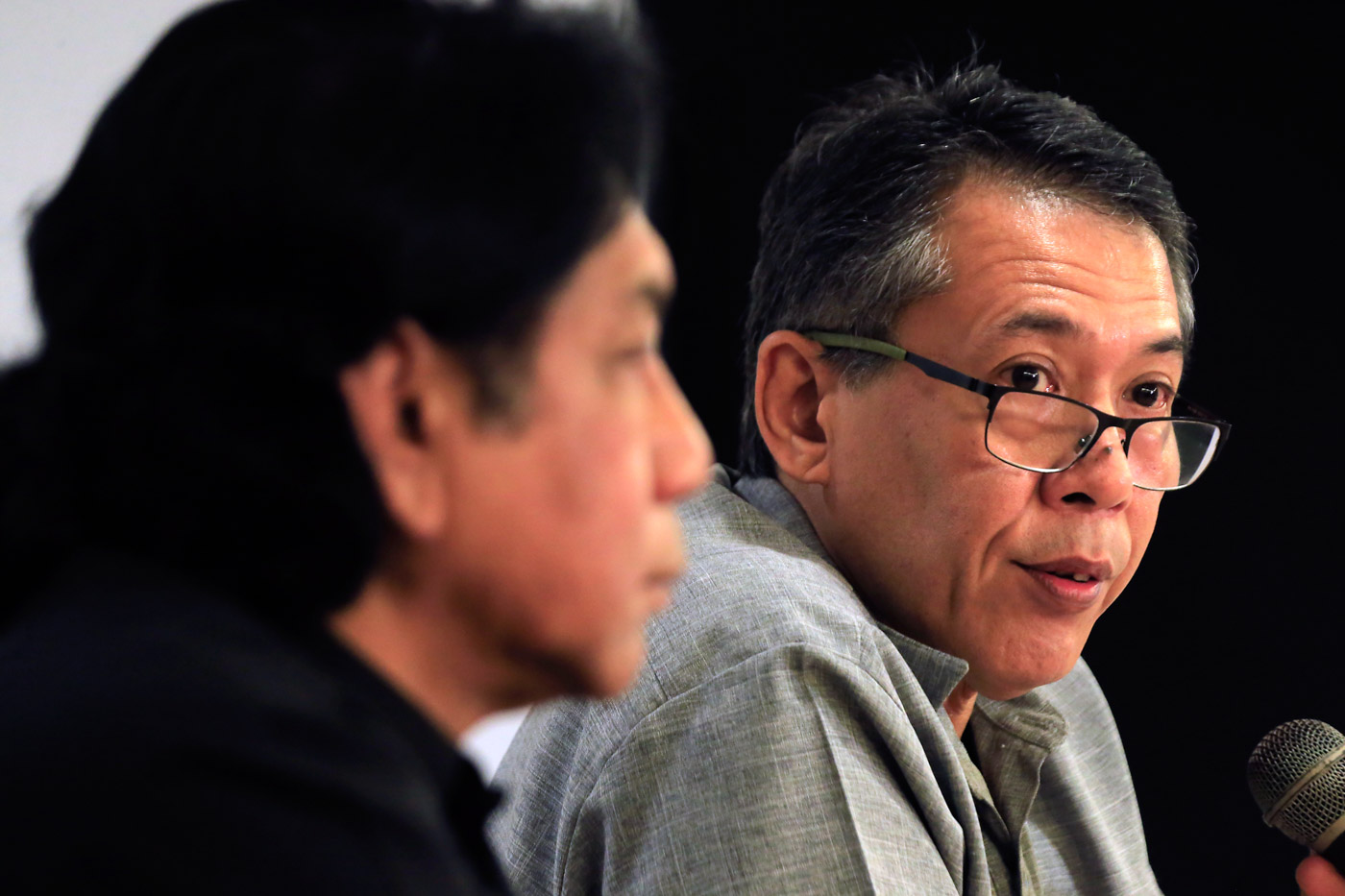 MANILA, Philippines – Human Rights lawyers filed on Wednesday, October 11, different petitions before the Supreme Court (SC) which seek, among others, to declare unconstitutional the government circulars that ‘operationalize’ the war on drugs.

The Free Legal Assistance Group (FLAG) led the filing of petitions for injunction and prohibition against the Philippine National Police or PNP’s Command Memorandum Circular (CMC) No. 16-2016 and the Department of Interior and Local Government or DILG’s 2017-112.

PNP CMC No. 16-2016, signed by General Ronald Dela Rosa in July 2016, lays out guidelines for the police to conduct Project Double Barrel.

FLAG lawyer Jose Manuel “Chel” Diokno said in a press conference on Wednesday that the PNP circular should be declared unconstitutional because of non-legal terms like “neutralizing” and “negating.”

“It expressly authorizes the police to kill suspected drug pushers, user or ‘illegal drug personalities’ in the guise of ‘neutralizing’ or ‘negating’ them,” Diokno said.

Diokno added that the circular empowered the police to “neutralize” suspected drug personalities, instead of their function of evidence-gathering and case buildup.

Covered in the petition is DILG’s circular on its Masa Masid program, the community-based program which establishes channels for reporting crimes including the controversial drop boxes.

“Here they are not asked to report crimes, they are asked to submit names and there’s a big difference,” Diokno said explaining that reporting crimes usually come from tipsters with knowledge of an incident, while submitting names could be done hastily and put people’s lives at risk.

Diokno said they are still hopeful for a positive result despite the past SC decisions that favored the interests of President Rodrigo Duterte such as the upholding of martial law in Mindanao and the hero’s burial for the late Ferdinand Marcos.

“Hindi naman lahat ng kaso sa SC talo (Not all cases in the SC were lost). There’s nothing political about this, this is purely on legal grounds,” Diokno said.

The filing, however, came within minutes of Malacañang’s announcement that President Rodrigo Duterte named the PDEA as the sole agency to conduct the war on drugs.

Diokno said their intention remains to declare the circulars unconstitutional.

The petition also asks the SC to enjoin the PNP from “carrying out any instructions, pronouncements or utterances of Duterte…that do not conform to the President’s ordinance power under Executive Order No. 292.”

FLAG’s petitions also asks the SC to compel the PNP-Internal Affairs Service (IAS) and the National Police Commission (NAPOLCOM) to submit a monthly report to the Court on the status of their investigation into all ‘nanlaban‘ (fought back) cases.

They refer to cases of deaths where policemen claim the drug suspects fought back and had to be neutralized.

“In our view, the government is neglecting cases of nanlaban. We are not seeing any genuine investigations into alleged EJKs in light of those nanlaban cases,” Diokno said.

This petition adds to the list of legal challenges against the war on drugs filed before the SC, lower courts and even the Office of the Ombudsman.

While the previous petitions cover only local incidents, FLAG’s petitions aim to hit at the nationwide policy and therefore the most comprehensive in terms of coverage when it comes to challenging the war on drugs.

Before FLAG’s petition, the Center for International Law (CenterLaw) filed a petition for a writ of amparo for the families and a survivor in an alleged execution by local police in Payatas. The SC granted them the writ and issued restraining orders against the policemen and ordered the police to furnish parties of documentation related to their investigations.

FLAG also filed a petition for writ of amparo for other victims of police drug operations.

The QC Police District (QCPD) said they have told their policemen to play minimal roles in the house surveillances, but said they cannot be stopped from escorting barangay officials who are authorized through the Barangay Anti-Drugs Council (BADAC).

The BADAC is just one of the government’s policies that enable authorities to, one way or another, conduct the war on drugs. So should the circulars be declared unconstitutional, what’s to stop the police from operating outside of them?

Diokno said the police would then be forced to stick to their ordinary functions of gathering evidence and submitting them for prosecution.  – Rappler.com