Oct 13, 2017 1:08 PM PHT
Jodesz Gavilan
Facebook Twitter Copy URL
Copied
Human Rights Watch says the fight will not end 'until there is justice and accountability for the thousands of victims' of President Rodrigo Duterte's violent war on drugs 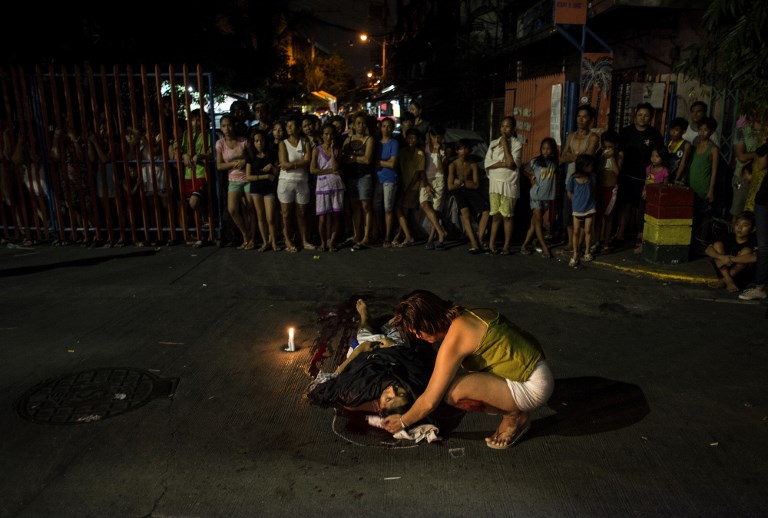 MANILA, Philippines – Human Rights Watch (HRW) warned that the Philippine government will not get away scot-free even if President Rodrigo Duterte takes his campaign against illegal drugs off the hands of the police.

“If Duterte believes that declaring another suspension in police killing operations will ease pressure for a UN-led international investigation into the drug war, he should think again,” HRW Deputy Director for Asia Phelim Kine said on Friday, October 13.

In a memorandum dated Tuesday, October 10, Duterte directed the Philippine Drug Enforcement Agency (PDEA) to be the “sole agency” to conduct all campaigns and operations against illegal drugs.

This means that the Philippine National Police (PNP), which has been at the forefront of the war on drugs, will terminate its high-profile programs Oplan Double Barrel and Oplan TokHang.

The order comes two days after a Social Weather Stations (SWS) survey showed Duterte’s public satisfaction rating plunging – believed to be due to the continuous rise of killings in his violent war on drugs.  So far, at least 3,850 people were killed in police operations while at least 2,290 others were killed mostly by vigilantes.

A separate SWS survey found that half of Filipinos do not believe drug suspects killed in police operations really fought back, while 6 out of 10 Filipinos believe the suspects were killed even though they had already surrendered.

According to Kine, the change in public sentiment coupled with low ratings is a sign that Duterte “is finally feeling the heat,” but it doesn’t end there.

“His war won’t end until there is justice and accountability for its thousands of victims,” he said.

The Philippine government, however, has consistently denied the existence of extrajudicial killings in the country despite another SWS survey showing that 7 in 10 Filipinos are worried about themselves or people they know becoming a victim.

The PNP, on October 6, said there has been “officially no case” of extrajudicial killing since July 2016 while a delegation to the Universal Periodic Review (UPR) on September 22, insisted that the deaths “are not extrajudicial killings” as it rejected calls by United Nations (UN) member-states to conduct a thorough and impartial probe into the drug war deaths.

If the government continues to deny and not resolve these killings, Fisher warned that the Philippines can be kicked out of the UN rights council. It is a measure that can be taken by the UN General Assembly in New York. (READ: PH can be kicked out of UN council if killings continue – HRW) – Rappler.com