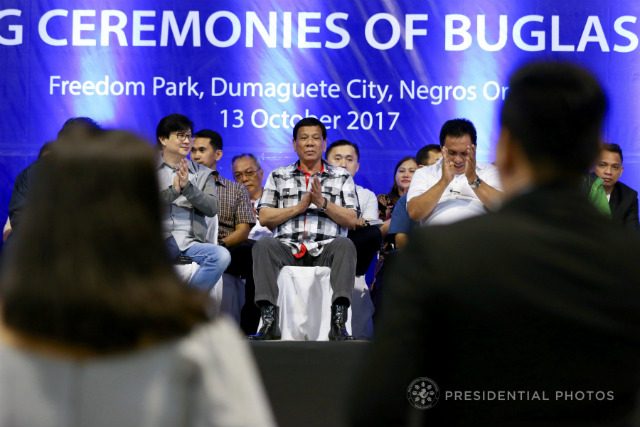 MANILA, Philippines (UPDATED) – Opposition group Tindig Pilipinas slammed President Rodrigo Duterte as a “paranoid and insecure little man” after he warned he will declare a revolutionary government should a destabilization plot seek to replace him with a new leader.

“President Duterte is losing his grip. Only a paranoid and insecure little man afraid of losing power will rationalize the need to impose a revolutionary government upon the people,” anti-Duterte coalition Tindig Pilipinas said in a statement Saturday, October 14.

“The paranoia is evident. It is manifested in the slide in the surveys, from the increasing numbers of the various forms of protests, from the massive pushback on social media and from the President’s increasingly irrational, indefensible and incoherent stances,” the group added.

Tindig Pilipinas issued this statement after Duterte on Friday, October 13, threatened to create a revolutionary government. He told critics that he will do this if he thinks they’re “about to take over the nation,” and if they “have destabilized government” to the point that they will name a new leader.

But Tindig Pilipinas said the “threat to annihilate” democracy is Duterte’s “ultimate power game” in order to suppress “growing discontent” among the people.

“Like any abuser sensing that his victims are seeing him as the abuser that he is, he senses doom. He knows he is an empty can once he loses control,” the statement said, as it listed Duterte’s vulnerabilities, including the P6.4-billion Customs smuggling, his family’s wealth, and his refusal to sign the bank secrecy waiver.

Tindig Pilipinas said there is nothing reformist or revolutionary about the government Duterte threatened to create because “he is playing for survival.”

“Let no one see this as anything else but weakness,” the coalition said. They also urged democratic forces to “resist this move to subvert our nation for the interests of one man, his family, and his cohorts.”

In a statement, the Liberal Party said a revolutionary government would be a “return to oppression and dictatorship.”

Senator Antonio Trillanes IV, a fierce critic of Duterte, said the President’s threat “is not only to intimidate those opposing his administration but also to divert the attention from the various controversies his family is involved in.”

“It is also his only way to escape accountability for his crimes  by perpetuating himself in power,” he added.

This is not the first time the President toyed with the idea of a revolutionary government, but back in August, he said he is “not into it.” – Rappler.com