Justice Caguioa: If it happened to De Lima, it can happen to anyone 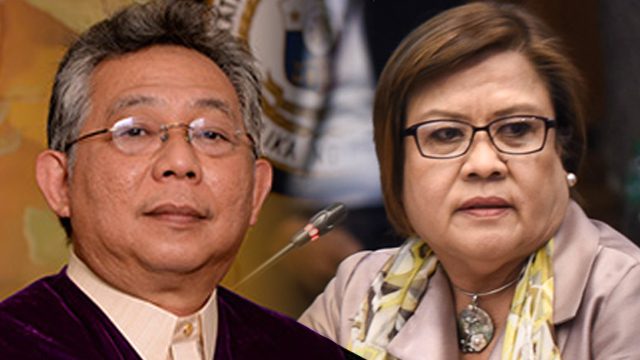 MANILA, Philippines – Supreme Court (SC) Associate Justice Benjamin Caguioa said the Muntinlupa City Regional Trial Court (RTC) had no legal basis to issue an arrest warrant against Senator Leila de Lima, and warned that if such could happen to a senator, it could happen to anyone.

Caguioa was among the 6 justices who voted in favor of De Lima on Tuesday, October 10, but the SC en banc junked the senator’s petition and ruled that the RTC has jurisdiction over the drug cases filed against her. The majority ruling keeps De Lima in jail.

But Caguioa in his 59-page dissenting opinion stressed that the information is “null and void” as well as “fatally defective” as it does not validly charge De Lima with any unlawful act under Republic Act No. 9165.

He said the following are the information’s “patent glaring defects”:

According to Caguioa, the information against De Lima for illegal trading of drugs is also “perforce fatally defective.”

“Accordingly, Petitioner is effectively deprived of the fair opportunity to prepare her defense against the charges mounted by the Government as she is left to rely on guesswork and hypotheticals as to the subject matter of the offense,” the SC justice explained.

“Under these circumstances, by no means is Petitioner properly equipped to face the awesome power and resources of the State, there being no sufficient factual allegations of the specific, actual offense that she is charged with and its corpus delicti.”

Caguioa said De Lima was “no doubt” deprived of her right to be informed of the nature and cause of the accusation against her. He said the senator has also been “deprived her liberty without due process and to be presumed innocent.”

The SC justice also noted that the ponencia “conveniently avoids” specifying and enumerating the elements of illegal trading.

“How can the sufficiency of the Information be determined if not even the elements of the crime it is supposedly charging are known?” Caguioa asked.

By doing this, Caguioa said the ponencia tends to validate the “dangerous and anomalous situation” where an ordinary citizen can be arrested “by mere allegation” in an information of committing “illegal trading of dangerous drugs using mobile phones and other electronic devices.”

“It is highly lamentable that the majority of the members of the Court have put their imprimatur to this insidious manner of phrasing an Information concerning illegal drugs offenses to detain an unsuspecting individual. The real concern is this: if this can be done to a sitting Senator of the Republic of the Philippines, then this can be done to any citizen,” he added.

Caguioa also said that this case goes down in history as “the only criminal case involving dangerous drugs where the information is totally silent on the corpus delicti of the illegal trading and yet is still held sufficient by its mere averment of the phrase ‘dangerous drugs.'”

This case, he said, now “opens the floodgates” to the filing of criminal cases on mere allegation that a person had sold or traded “dangerous drugs.”

Caguioa disputed De Lima’s claim that the accusations against her constitute the crime of direct bribery instead of illegal trading.

The ultimate element of indirect bribery, he said, is the acceptance by a public officer of a gift or material consideration. What’s more, Caguioa noted that indirect bribery is an offense within the jurisdiction of anti-graft court Sandiganbayan, and not the RTC.

“Thus, the respondent Judge had no jurisdiction to take cognizance of the case and issue the warrant of arrest against Petitioner,” he added.

SC Associate Justice Francis Jardeleza, who also voted in favor of De Lima, shares Caguioa’s opinion on which court has the jurisdiction of the case.

“At the time of the alleged commission of the offense, petitioner was the incumbent Secretary of the Department of Justice, a position classified as Salary Grade 31 and squarely falls within the jurisdiction of the Sandiganbayan. It is likewise clear from the allegations in the Information that the crime was committed in relation to her capacity as then Secretary of Justice,” Jardeleza said in his 11-page dissenting opinion.

Jardeleza argued that Guerrero violated De Lima’s constitutional right to due process and to speedy disposition of cases when she issued a warrant of arrest without resolving the issue of jurisdiction.

“When a court without jurisdiction over the offense orders the arrest of the accused prior to resolving the issue of jurisdiction, it necessarily prolongs the disposition of the case. I view this delay as incompatible with due process and the right to speedy disposition of cases,” he explained further.

‘The Constitution can wait’

While the SC upheld the charges against De Lima, it nonetheless said that the information could always be amended without releasing De Lima from jail.

Caguioa in his dissenting opinion, however, argued that even if the information may be cured by an amendment, the RTC judge should have waited for the amendment to be made before issuing the warrant of arrest against De Lima.

“To detain or restrain the liberty of Petitioner on the strength of a fatally defective Information, or pending the amendment thereof to conform to the requirements of the Rules of Court, was to consciously and maliciously curtail Petitioner’s constitutionally-guaranteed rights to be presumed innocent, to be informed of the nature and cause of the accusation against her, and not to be deprived of her liberty without due process,” he explained.

In his concluding statement, Caguioa noted that there is no direct pronouncement from the SC that the information against De Lima and her co-accused is valid. (READ: De Lima ruling ‘one of the grossest injustices’ – Carpio)

He insisted that the information cannot possibly be amended “because it is fatally defective.”

“The majority of the Court has succeeded, by its Decision, to make the Constitution subservient to the rules of procedure. They now allow for the deprivation of an individual’s liberty while waiting for the correct and legally sufficient Information to be filed and approved by the criminal court,” he said.

Caguioa noted that the SC has already ruled before that void information warrants the acquittal of the accused.