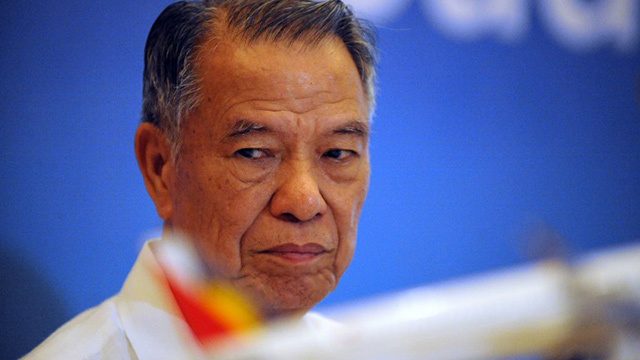 MANILA, Philippines – Filipino-Chinese tycoon Lucio Tan was again at the receiving end of President Rodrigo Duterte’s threats during his speech on Tuesday, October 17, in Camarines Sur.

Duterte claimed Tan has remained untouchable because of alleged threats to fund the “destabilization” of government officials.

(Lucio Tan, P6 billion, ever since. No collection, no payment since a mayor would be scared to enforce the law, because if you meddle with [Tan], he will fund destabilization.)

Duterte dared Tan to contribute to destabilization plots against him so he could order the military to target the businessman as a suspect.

(It would be good if he contributed to a plot against me because if the soldiers will believe me, I will target him first. Either you pay or I’ll have you circumcised again.)

Duterte again claimed Tan sought a meeting with him in Davao City days before the 2016 elections to offer him money. (READ: Want to be on Duterte’s good side? Be pro-poor, aide tells businessmen)

“Hindi ko tinanggap kasi alam ko, balang araw, hihiritan kita (I didn’t accept it because I knew that one day, I would target you) and all others,” the President said.

On October 6, Tan’s company, Philippine Airlines (PAL), reached a settlement with the Department of Transportation (DOTr) totaling P6 billion, for the payment of navigational fees and other charges accumulated through the years. (READ: What’s next for PAL and its potential partner after P6-B settlement)

The settlement came a month after Duterte warned Tan to settle his liabilities with the government or the President would shut down the Ninoy Aquino International Airport (NAIA) Terminal 2, where PAL operates.

Despite Duterte’s frequent rants against Tan, the tycoon and his son Michael, president of the LT Group, are often seen attending the President’s events with the business community.

The elder Tan is the chairman emeritus of the Federation of Filipino-Chinese Chambers of Commerce and Industry Incorporated (FFCCCII) which has declared support for major programs of the Duterte administration. The President often graces FFCCCII’s events. – Rappler.com