Oct 18, 2017 4:39 PM PHT
Rappler.com
Facebook Twitter Copy URL
Copied
The petition is filed on behalf of residents of 26 barangays in San Andres, Manila, including the families of 35 residents killed in police operations in the area 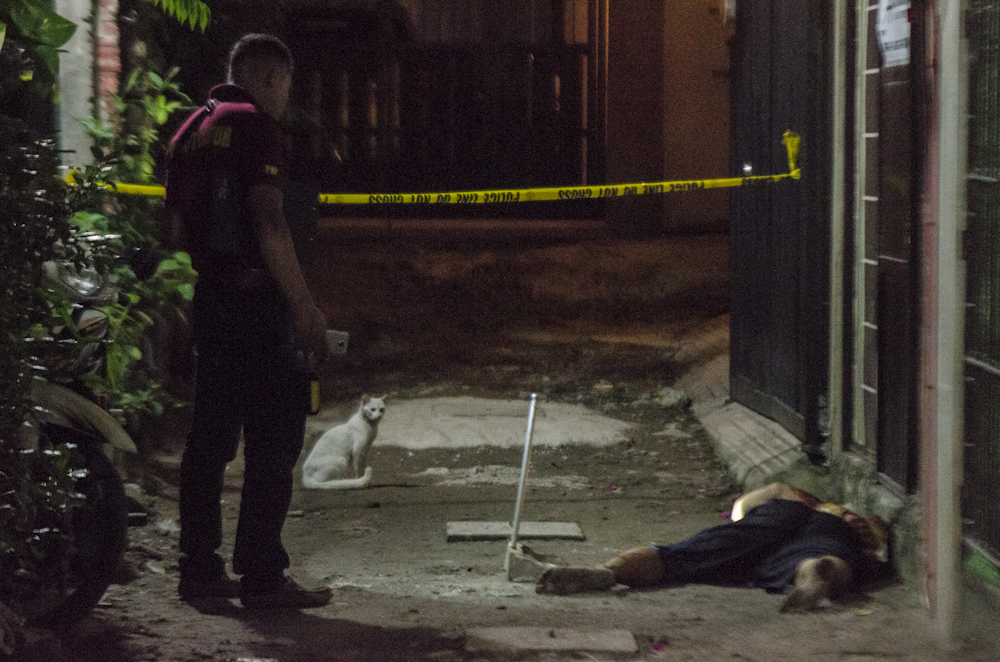 MANILA, Philippines – A second petition against the police-led Oplan TokHang was filed before the Supreme Court on Wednesday, October 18.

The Center for International Law (CenterLaw) filed the petition seeking the issuance of a writ of amparo to protect certain individuals and the residents of 26 barangays in San Andres Bukid, Manila, against the anti-illegal drug campaign.

In a 57-page petition, CenterLaw sought the issuance of a temporary protection order (TPO) prohibiting police authorities from getting near the residences and workplaces of the families of 35 residents of San Andres Bukid who were killed in the drug raids in the area for the past 13 months.

The petition specifically sought to enjoin the respondents from entering within a radius of one kilometer from the residence and work addresses of the families of TokHang victims.

It also sought to bar the respondents from directly or indirectly harassing, contacting, or communicating with the affected parties.

A writ of amparo is a remedy that serves to protect constitutional rights perceived to be in danger. It covers extralegal killings and enforced disappearances.

The petitioners also asked the Court to enjoin the police from conducting anti-drug operations in San Andres Bukid without the required coordination and presence of representatives from the barangay, PDEA, and the media.

The petitioners  are led by Sister Ma Juanita Daño of the Religious of the Good Shepherd and include 47 others who are suing individually and collectively. The petition was filed as a class suit on behalf of all the residents of 26 barangays in San Andres.

San Andres, which is part of the 5th District of Manila, has a total of 65 barangays.

The petition recounted the systematic violence allegedly committed by members of MPD Station 6 against residents of San Andres Bukid and its adjacent areas.

The petition pointed to “police cordoning off the perimeters of slum communities and disabling closed circuit cameras; of armed men entering these areas in the dead of night, barging  into houses no better than oversized boxes, shooting their victims and leaving.”

It also talked about “police standing guard, training their flashlights on houses and windows and shouting harsh warnings at the neighbors not to look while armed men break down doors and gun down the victims inside their own homes; of police appearing in the scene shortly after, carting off the bodies of the victims and directing that  the bodies be brought to the police’s authorized funeral parlors.”

The petitioners asked the Court to prohibit police from coercing barangay officials into producing or submitting a list of alleged drug users, pushers, or trouble-makers in community until the respondents have shown full compliance with the constitutional requirements of due process, the requirements of the Data Privacy Act, and regulatory assurance against arbitrariness and criminal machination.

According to the petition, many victims of drug-related killings in their community had surrendered to barangay authorities after their names were included in the local drug watch list.

“Sometime thereafter, violence were visited upon them and their families resulting in their death or those of their relatives and even those who were merely at the wrong place at the wrong time,” the petition read.

“It appears that the Respondents have generated a list that they have apparently pressured barangay officials to make and to submit to them. Such list has become what has been referred to as the kill list,” it added.

The first petition against Oplan TokHang was filed before the SC on January 26, on behalf of the families of 4 drug suspects killed in Payatas, Quezon City in August 2016, as well as the lone survivor in the incident. (READ: A gruesome tale of TokHang: ‘Sir, may humihinga pa’)

The High Court issued a writ of amparo based on the first petition in late January, and another in February.

On October 10, President Rodrigo Duterte removed the Philippine National Police from the helm of the drug war, and tasked PDEA as the sole agency on top of the campaign.

Even with this order, policemen led a drug raid in Tondo, Manila, on October 11, leading to the deaths of 3 drug suspects. (READ: 3 dead in Tondo a day after Duterte’s new drug war memo)

The PNP had announced the suspension of its flagship anti-drug campaign Oplan Double Barrel, including TokHang, on October 12. – Rappler.com