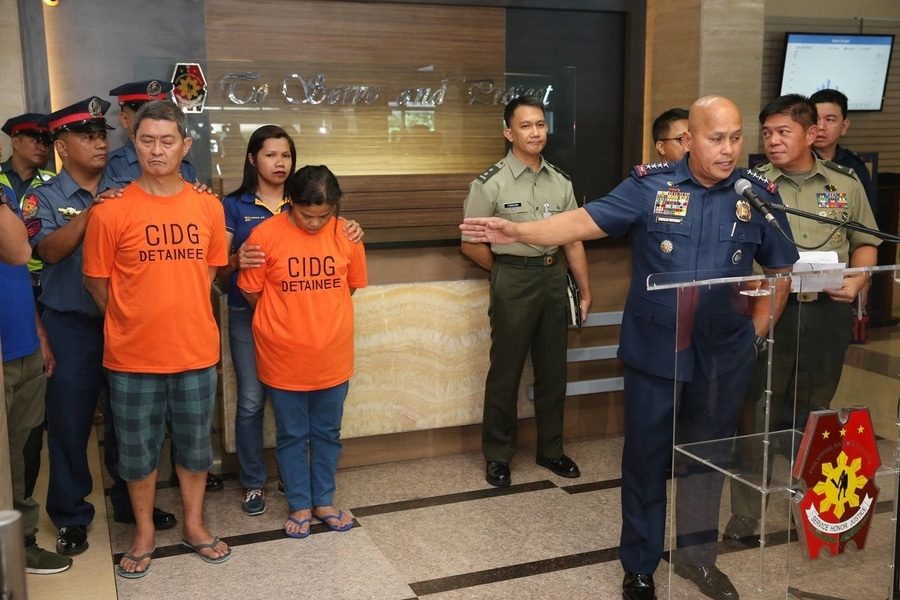 Aurora Cayon and Louie Martinez were presented to the press in the PNP’s national headquarters in Camp Crame.

Speaking to reporters, Dela Rosa said the two were captured on October 19 in Barangay Dulao, Bago City, Negros Occidental, through an operation by the PNP Criminal Investigation and Detection Group (CIDG) and the AFP.

Dela Rosa said Cayon was a staff member of the rebel group’s National Finance Commission (NFC) and was wanted for robbery and arson. Martinez, on the other hand, was a member of the NPA’s National Military Staff, managing their logistics.

Dela Rosa said Cayon was wanted for robbery and arson, and Martinez for murder and multiple attempted murders. He added that cops pursued them for “months” before they were jailed.

Big blow to the CPP-NPA

The top cop trumpeted Cayon and Martinez’s capture as a “big blow” to the CPP-NPA.

This was affirmed by Philippine Army Chief of Staff Brigadier General Gilbert Gabay in the briefing, explaining that the pair managed the top-to-bottom pushing of the armed group’s funds.

He said that from January to September 2017 alone, the CPP-NPA got P1.2 billion just from extortion in Mindanao. The money, Gabay said, funds their operations in holding off cops and soldiers.

Dela Rosa said that they were already expecting retaliation from the group for their leaders’ capture.

“Eh gumagawa nga sila ng atrocities na walang nahuli sa kanila, how much more kung ganitong big fish ‘yung nahuli natin sa kanila? (They commit crime even though there are no cops to catch them, how much more when we captured [their leaders]). So we expect some retaliatory attacks coming from the CPP-NPA,” Dela Rosa said. – Rappler.com