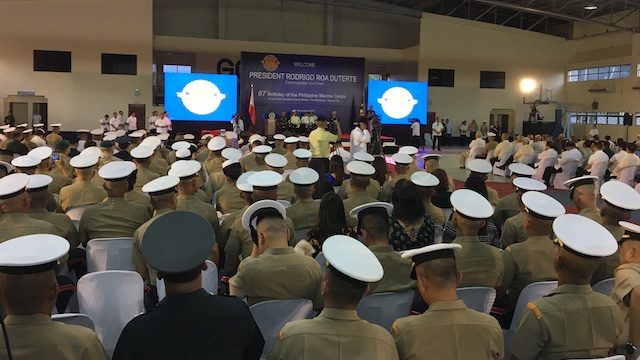 MANILA, Philippines – The crowd of Filipino Marines fell silent as the faces of fallen colleagues were shown in a video presentation honoring their heroism on Tuesday, November 7.

It’s the 67th “birthday” of the Philippine Marines. The celebration that President Rodrigo Duterte attended came in the wake of the bloody siege in Marawi City where 35 of them were killed.

The late First Lieutenant John Frederick Savellano was among the faces that flashed on the screen. The young officer was one of the 13 Marines killed on June 9, 2017, in a battle to retake the Baloi Bridge that served as a critical supply route for the Maute fighters in Marawi.

It was the bloodiest day in the Marawi war, a tragedy that happened just a few days after Savellano’s leadership was celebrated for clearing a building that Maute fighters occupied, and retrieving up to P79 million in cash.

“Let this 67th birthday be our way of celebrating our fallen warriors’ legacy by taking a pause and reflecting on why and how the Philippine Marine Corps was born,” said Philippine Marine Corps Commandant Major General Alvin Parreño in his speech. But the celebration was not only for the heroism of the fallen Marines in Marawi but also of those who fought in battles in other parts of the country.

Two Marines were recently killed in action in Palawan and another two in Sulu. “For sure, no story and no hero will be left forgotten,” Parreño said.

SILENCE as the faces of Marines killed in Marawi are shown in a video presentation. Pres Duterte leads 67th bday celebration of PH Marines pic.twitter.com/JyuEDGdThb

The Philippine Marine Corps is a component of the Philippine Navy that provides ground combat elements working in tandem with the fleet.

It’s a lean and mean fighting unit composed of 8,000 fighters who are deployed around the country to, among others, guard the country’s maritime territory in the West Philippine Sea (South China Sea) and various Philippine islands.

On Tuesday, the Marines also celebrated the living heroes.

Among the recipients of the Gold Cross medal is First Lieutenant Kim Adrian Martal for leading an operation in Marawi City, Staff Sergeant Ricky Villar for fighting Abu Sayyaf members in Sulu, and Sergeant Richard Anding for also fighting in Marawi City. 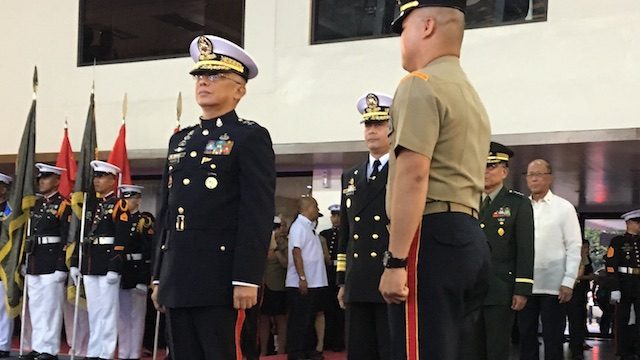 The same badge was given to Rear Admiral Rene Medina of the Western Mindanao Command for assisting the Marines.

The birthday celebration ended with the fabled cake ceremony that Marines worldwide are known for. The cake was paraded in an elaborate ceremony led by Marine officers before the Commandant sliced the cake and took the first bite.

He reported that the cake was fit for consumption before the President Rodrigo Duterte himself was given the second slice.

It’s a tradition followed by Marines all over the world.