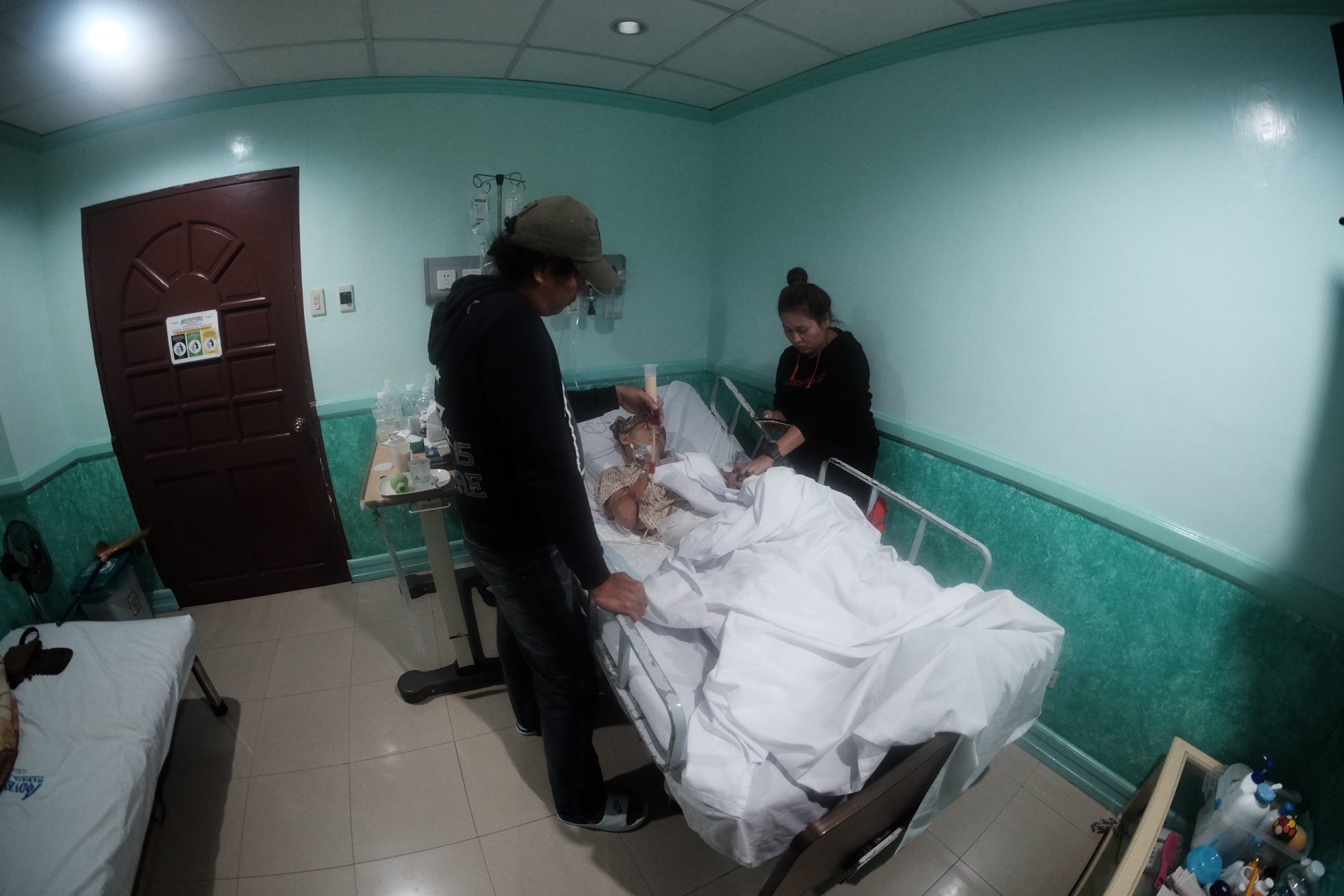 Facebook Twitter Copy URL
Copied
Gregorio Mainar has been taking care of his kid brother, Ondoy, since he was born. Now, as Ondoy lies in a coma, Gregorio and his family prepare to take care of him for the rest of his life.

LANAO DEL NORTE, Philippines – Gregorio Mainar stood at his brother’s feet while the nurse carefully shaved the hair that had started to grow around the stitches of his head wound.

In a gentle, lilting voice, Gregorio explained what was happening as his brother looked at him with blank eyes.

“‘Doy, ahit muna ha. Para pogi (Doy, you need to be shaved so you can be handsome),” said 41-year old Gregorio, while massaging his brother’s calves and feet.  “There is a saying that two brothers fighting in the same war is a bad omen –,” said the older Mainar, his voice trailing off as he shook his head.

The saying is but a superstitious belief; one that should not be entertained in the battlefield. To do so might turn luck against you and in the killzone, sometimes luck is enough to keep you alive.

But the two brothers, who are both scout rangers, were called to serve in Marawi. On September 21, just a little over a month since Ondoy celebrated his 25th birthday, word came out that a soldier named Mainar had been wounded.

Gregorio’s men began checking on him, asking where he had been hit and how he was doing.

“I wasn’t hit at that time,” said Gregorio, who was initially bewildered until he quickly came to the sinking conclusion that it must have been his brother.

The saying about brothers and wars courting bad omens popped in Gregorio’s mind. He checked with the medics and saw that his brother was listed among the wounded. Ondoy had suffered a gunshot wound to the head.

Gregorio scrambled to secure permission from his commanding officer to get to the Adventist Medical Center in Iligan, which is about an hour away from Marawi. He found Ondoy in critical condition but alive.

Ondoy had suffered a traumatic head injury, left front-parietal area. The left side of his skull and brain had been hit, leaving what looks like a crater-like wound in his head.

Dr Edsel Cabaluna, the AFP physician coordinator of the Adventist Medical Center, explained Ondoy’s condition to Rappler. “Extensive bulk of his brain and brain tissues were blown off. Immediately impacted are his motor skills and speech. Ondoy cannot speak but he can hear.”

Cabaluna and other doctors say that a massive head injury like that would have normally meant immediate death. It is a miracle that Ondoy is still alive, said Cabaluna. But it will take another miracle for his condition to improve.

“The brain tissues and the skull bones – unlike other parts of the body – take a very long time to regenerate. It could take years before Ondoy recovers. When he does, he will have to undergo rehabilitation. He will have to relearn speaking, walking, and other motor skills,” Cabaluna explained.

Cabaluna acknowledged that some doctors would classify Ondoy as being in an unrecoverable vegetative state, but he choses to be positive.

Since Ondoy was shot on September 21, Gregorio has been at Ondoy’s side, watching over his brother, talking to him, and wiping the occasional tear that wells up in the younger man’s eye. Gregorio’s wife, Sheryle, has joined him, leaving their two daughters in the care of her parents.  The hospital room in Adventist Medical Center has been their home as they stand vigil over Ondoy.

They take turns washing him and feeding him a blended mix of fruits through a tube in his stomach. Another set of tubes is attached to Ondoy’s throat to extract phlegm that may build up in his lungs and further restrict his breathing. A beige beanie conceals and protects Ondoy’s head.

Once his condition stabilizes, Ondoy will be flown to V Luna for an operation to fit a metal plate on his head to serve as a more protective barrier for his head wound.

On November 5, Ondoy had another operation to affix skull bone fragments. It is hoped that the operation will further stabilize Ondoy’s condition.

According to Colonel Ramil Bitong of the G1 Personnel Officer of the Philippine Army, once Ondoy’s condition stabilizes, the AFP V Luna Medical Board will review his case. Once he is discharged from active duty due to disability, he will receive the benefits and entitlement of an officer of the next higher rank.

Sheryle Mainar says that she and her husband are used to taking care of Ondoy. He began living with the couple when he was in high school and to her, Ondoy is like a brother and a son. When she married Gregorio, the eldest boy in a family of 11 siblings, it was clear that taking care of Ondoy, the 10th and youngest boy in the family, was his sworn duty.

Ondoy wasn’t really supposed to be a soldier. He enlisted in the army partly because he wanted to be like his big brother, and partly because of need.

As an older brother, he was already thinking ahead and weighing his aging parents against Ondoy’s future.  Gregorio got a pre-need educational plan that was offered to him through a company that partnered with the army.

For 10 years, about P500 was automatically deducted from his salary. It was a sizable deduction from what he describes as his meager base pay but it was a small sacrifice to secure his brother’s future.

When it was time for Ondoy to go to college, the brothers made a trip to Manila to redeem the proceeds of the pre-need plan.

“We went to Makati. I don’t remember where but I remember that there were other buildings around us with signs of pre-need companies. I couldn’t find the office of the pre-need company. We were so shocked when the guard told us that the company had already closed,” said Gregorio, shaking his head.

By that time, Gregorio had two young daughters. He couldn’t afford to pay for Ondoy’s college education while paying for the tuition of his own kids. Ondoy stopped going to school and took on odd jobs until he finally decided to enlist in the army.

It was two years ago when Ondoy began to follow in his brother’s footsteps. 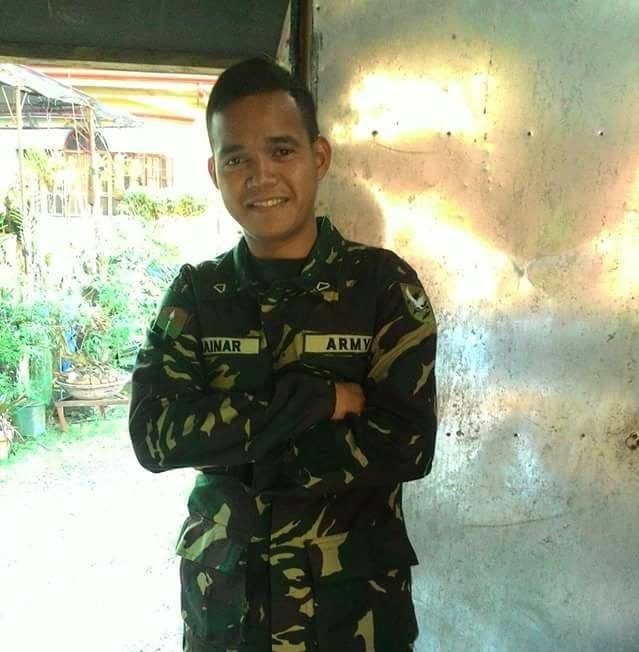 Days before Ondoy was shot, the brothers had seen each out on the field. It was September and the army was slowly closing in on the enemy troops, literally cornering them to surrender.

“One of the troops told me where my brother was. He asked me for cigarettes,” said Gregorio, smiling.

The fighting was so intense then, he recalled. It was like face-to-face combat, with only the narrow streets of Marawi separating the rebel fighters from the security forces. Bullets were falling on them like hail.

“I sent him a text message. I told him that bullets were everywhere and reminded him to dodge bullets. He replied to say that he wouldn’t let a bullet get him,” said Gregorio.

Armed Forces  spokesperson Major General Restituto Padilla estimated that more than 1,700 soldiers were wounded in the battle to win back control of Marawi. “That’s roughly the equivalent of two battalions,” said Padilla.

And there are those like Ondoy who will have to live with the wounds of war for the rest of their lives.

“It is a miracle that he is still alive. We are hoping for another miracle so –,” said Mainar, his voice trailing off again as he struggled to find words.

“At least my brother is still alive,” he said, finally. – Rappler.com