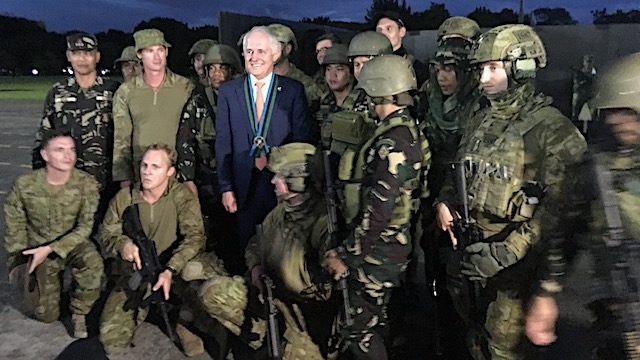 MANILA, Philippines – Australian Prime Minister Malcom visited the Philippine military headquarters, Camp Aguinaldo, on Monday, November 13, to witness a war game between troops of the Australian Defense Force (ADF) and their counterparts in the Armed Forces of the Philippines (AFP).

Turnbull is in the Philippines for the Association of Southeast Asian Nations (ASEAN) Summit and Related Summits. The Philippines is the chair of the ASEAN this year.

A side trip to Camp Aguinaldo was an opportunity for Turnbull to visit Australian troops deployed in the country.

The ADF has less than a hundred troops in the Philippines. Australia is one of only two countries with a visiting forces (VFA) agreement with the Philippines under a treaty ratified by the Philippine Senate in 2012. The other country is the US. Australian troops also join the Philippine and US militaries in the annual Balikatan war games. Australia also assisted the Philippine military in its recent battle with local terror groups that pledged allegiance to the international terrorist network Islamic State.

Australia, along with US, flew its P3 Orion surveillance planes to locate the enemies in the battle zone. It also offered  to train Filipino troops in urban warfare and pledged donations for Marawi residents displaced by the war.

He cited the Philippine experience in Marawi City, where troops fought armed radicals for 5 months with the assistance of allies. – Rappler.com