Trump: I fixed ties with PH, a ‘most prime real estate’ militarily 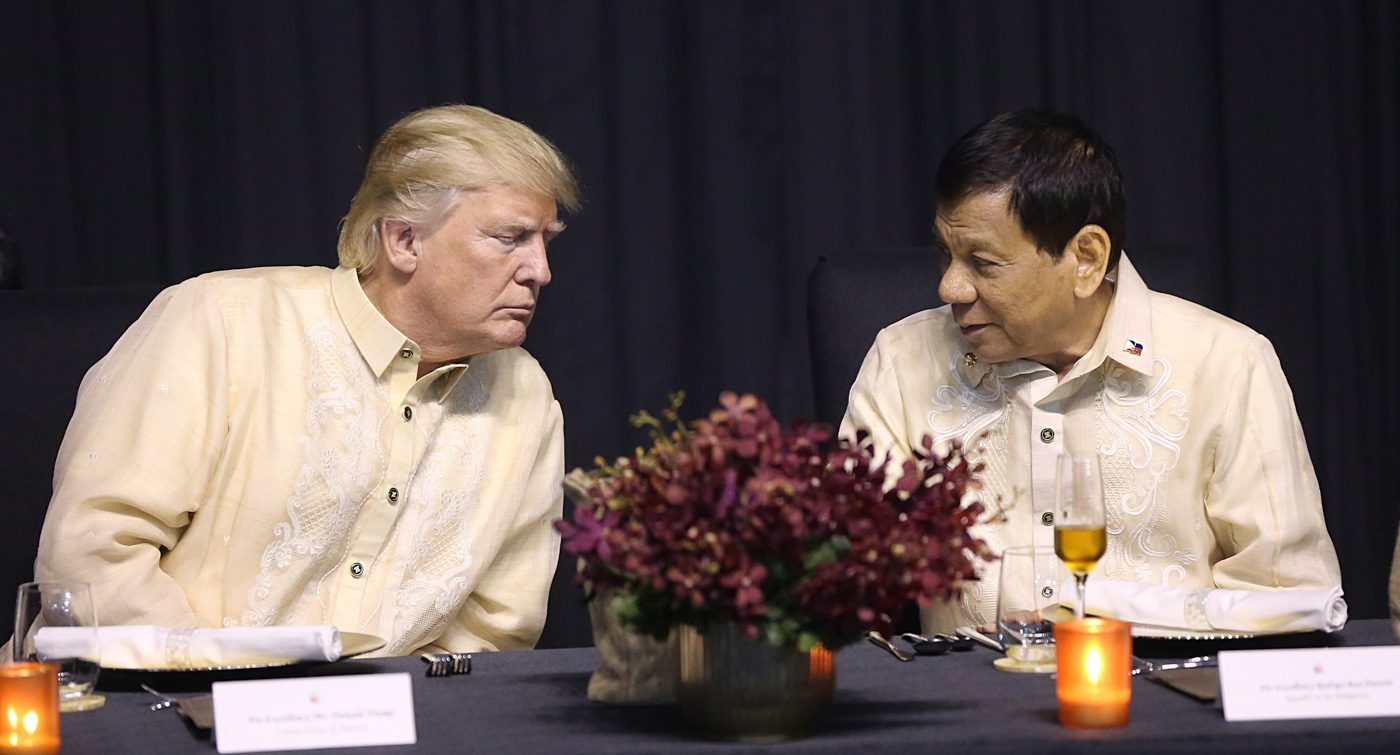 Facebook Twitter Copy URL
Copied
"[In] the Philippines, we just could not have been treated nicer....The relationship with the past administration was horrible, to use a nice word,' says US President Donald Trump

MANILA, Philippines – US President Donald Trump boasted of how he mended ties with the Philippines in a press briefing he held after attending the Association of Southeast Asian Nations (ASEAN) Summit and Related Meetings on Tuesday, November 14.

Trump said it’s “important to get along with the Philippines” considering it is a “most prime piece of real estate from a military standpoint.”

The Philippines is an archipelago sandwiched between the South China Sea and the Pacific Ocean. In their bilateral meeting, Duterte and Trump reaffirmed a key miitary-to-military agreement meant to increase US military presence in the Philippines.

Trump took a swipe at US President Barack Obama, blaming him for the deterioration of the relationship between the US and the Philippines. (READ: Trump, Obama bond over shared dislike for Obama)

During the Obama administration, Duterte had talked of an independent foreign policy that supposedly sought to wean the Philippines from traditional allies like the US, to the point of threatening to “scrap” the Visiting Forces Agreement and the Enhanced Defense Cooperation Agreement.

Duterte’s anti-US sentiments then were rooted in Obama’s criticism of his bloody drug war. On Tuesday, Trump – who had complemented Duterte’s handling of the drug war – took note of the Philippine leader’s markedly different tone since he became US president.

“[In] the Philippines, we just could not have been treated nicer. As you know, we were having a lot of problems with the Philippines. The relationship with the past administration was horrible, to use a nice word. I would say ‘horrible’ is putting it mildly,” said Trump.

“Now we have a very, very strong relationship with the Philippines, which is really important. [It is] less so for trade, in this case, than for military purposes. It is a strategic location – the most strategic location. If you look at it, it’s called the most prime piece of real estate from a military standpoint,” Trump told reporters.

He said the relationship between the two countries is better now. “So it’s very important that we get along with the Philippines, and we really do. We have a very good relationship. I would actually say probably better than ever before,” Trump said.

The Philippines was the last leg of Trump’s 12-day Asia tour. Duterte showed a liking for Trump, who was almost always beside him in events and photo opportunities. (WATCH: Duterte sings upon the orders of Trump)

Trump and Duterte have both been referred to as the “Duterte of the West” and the “Trump of the East,” respectively, because of their similar leadership styles.

Both are also facing controversies back home. Trump is accused of cooperating with Russia, which is accused of rigging the 2016 US presidential elections. Duterte is accused of widespread human rights violations in the name of his war on drugs. – Rappler.com