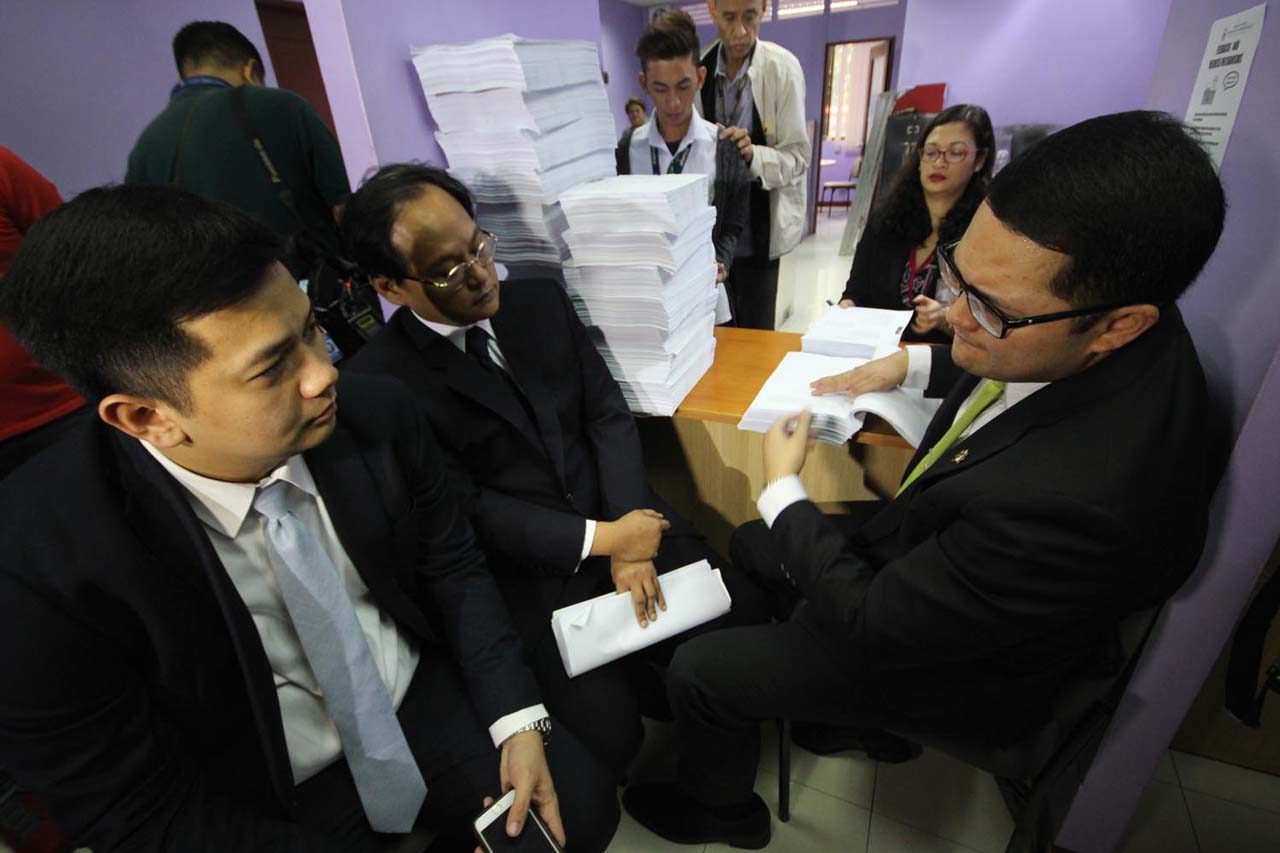 MANILA, Philippines (UPDATED) – The Department of Transportation (DOTr) is going after half of former president Benigno Aquino III’s Cabinet in a plunder complaint filed before the Office of the Ombudsman on Tuesday, November 21, over the alleged anomalous contracts for the Metro Rail Transit Line 3 (MRT3) during their time.

The plunder complaint filed by Transportation Undersecretary for Legal Affairs and Procurement Reinier Yebra seeks a plunder charge against the following:

This is a supplementary complaint to the graft complaint filed in October against Abaya and the same officials of the then-named Department of Transportation and Communications (DOTC) over the creation of special purpose company BURI to implement the maintenance contract of the MRT3.

The first complaint details the circumstances which led to the awarding of a P3.8-billion contract to Korean firm Busan Transportation Corporation in 2015. BURI was eventually created and it took over the contract, with only a 4% share left to original company Busan.

BURI’s contract has since been terminated. (READ: Tugade refuses to resign over MRT3 woes)

The crime of plunder involves funds amounting to more than P50 million and an amassing of ill-gotten wealth “through a combination or series of overt or criminal acts.”

“We have reason to believe that all of the foregoing elements are present here and all of the respondents should be held liable for the crime of plunder,” the complaint reads.

The DOTr officials said “Roxas and Abaya set into motion a grand scheme of turning the DOTC as a bottomless cash cow, entering into one anomalous procurement project after the other, in order to amass, accumulate and acquire ill-gotten wealth.” Roxas was DOTC secretary before he was appointed to the Department of the Interior and Local Government.

Japanese firm Sumitomo was the maintenance provider of the MRT3 until 2012. The DOTr said in its complaint that Sumitomo was eased out and replaced with “dummy corporations run by well-known Liberal Party stalwarts.” (READ: MRT woes: How often do they happen?)

The DOTr also accused Roxas of sitting on Sumitomo’s requests to extend its contract.

The complaint states that Abaya taking over the DOTC, and awarding in 2012 a short-term maintenance contract to PH Trams, “started the rapid deterioration of MRT’s trains, tracks, signaling, power supply, and stations.”

The private respondent, Dela Cruz, is being implicated in a “web of conspiracy.”

“His name repeatedly popped up during the Senate hearings conducted regarding the MRT3 problems where his role was questioned considering that he was connected with several maintenance providers that were awarded contracts during Abaya’s time as DOTC secretary,” the complaint reads. The other former Cabinet secretaries were part of the Government Procurement Policy Board (GPPB), which the DOTr said was involved in awarding the defective contract to BURI.

The DOTr said the Cabinet secretaries “all countenanced the deliberate intent of the MRT3 Bids and Awards Committee and Abaya to rig the bidding of the BURI project to favor BURI.”

It said the GPPB, through Resolution No. 24-2015, “gave its imprimatur” to the BURI contract “despite recognizing that the procurement method of the BURI project violated the Government Procurement Act.”

The DOTr’s complaint also mentioned that the award eventually given to Busan and then BURI had additional services which “have not been even bidded out before.”

What was supposed to be a P2.3-billion contract eventually became a P3.8-billion contract that included more services such as general overhauling, total replacement of the signaling system, and additional maintenance works.

This issue is the subject of a separate complaint against Abaya filed by the group Bayan Muna on Monday, November 20.

Lawyer Giovanni Lopez, director for legal services of the DOTr, said they have enough evidence to accuse the former officials of plunder.

“For the past 8 months, from the start of the contract of BURI, binayaran nila ang BURI every month by P54 million, walang deduction ‘yun despite unperformed service and undelivered spare parts, so for us that reason’s enough to hold them accountable for the crime of plunder,” Lopez said.

(For the past 8 months, from the start of the contract of BURI, they paid the maintenance provider P54 million every month without deductions despite unperformed service and undelivered spare parts, so for us that reason’s enough to hold them accountable for the crime of plunder.)

He added that they are not merely finger-pointing and carefully studied their case before filing.

In a separate statement on Tuesday, Senator Grace Poe expressed support for the DOTr case. Poe is the chairperson of the Senate public services committee which has been looking into the MRT3 mess.

“The Senate investigation that we conducted revealed that the award to BURI was anomalous and disadvantageous to the public. The poor maintenance service and the daily technical glitches have resulted in fewer functioning coaches and long passenger queues,” the senator said.

“There were individuals who appeared to have favored an incompetent maintenance provider and in mismanaging the train system. They should see this as an opportunity for them to clear their names. We expect that the Ombudsman will act expeditiously on the case, because every day of delay means distress and hardship for our riding public,” she added.

Based on DOTr data, from January 1 to November 17 this year, there have been 475 MRT3 problems already recorded – an average of 10.33 a week, or more than once a day on some days. – Rappler.com