Sheriff Abas to break many firsts as Comelec chair 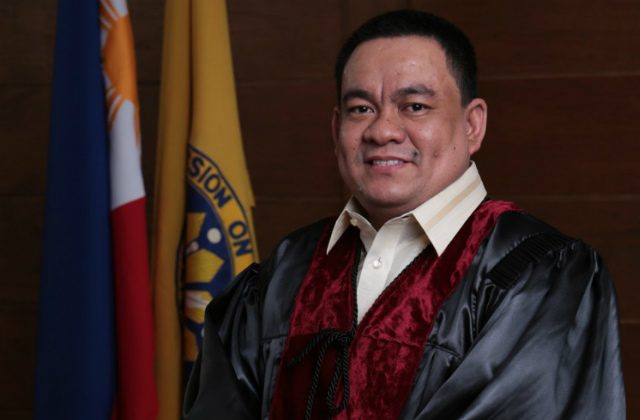 Facebook Twitter Copy URL
Copied
He will become the first Comelec chair from Mindanao, the first Muslim, and, at the age of 38, the youngest elections chief in Philippine history

MANILA, Philippines – Commission on Elections (Comelec) Commissioner Sheriff Abas is set to break many firsts in the poll body if he passes the Commission on Appointments (CA) and becomes the new Comelec chair.

Abas will become the first Comelec chair from Mindanao, Comelec spokesman James Jimenez confirmed in a text message to Rappler.

Abas, 38, will also become the youngest head of the poll body, replacing 53-year-old Andres Bautista and succeeding veteran lawyers like Sixto Brillantes Jr, who was 75 when he retired from Comelec.

At the same time, Jimenez said, Abas will be the first Comelec commissioner to become Comelec chair.

The man who nominated him – President Rodrigo Duterte – is the first president from Mindanao, the Philippines’ poorest island group that is also one of the hotbeds of election fraud.

Aside from hailing from Mindanao, another common denominator between Duterte and Abas is having studied at the Ateneo de Davao University, located in the city that Duterte led for more than two decades.

Abas now holds the reputation of having been first appointed by then president Benigno Aquino III, then having been virtually promoted by Aquino’s biggest critic – Duterte.

Abas’ nomination comes as Duterte pushes for a federal form of government, which will require a plebiscite run by the Comelec.

Who is Sheriff Abas?

Born on May 5, 1979, Abas finished philosophy at Notre Dame University in Cotabato City in 1999, and law at the Ateneo de Davao University in 2004.

He passed the Bar a year after graduation.

Abas later worked for 8 years at the Civil Service Commission (CSC) in the Autonomous Region in Muslim Mindanao (ARMM). Abas served as lawyer and acting assistant regional director there.

Back then, he was appointed to the Comelec alongside Bautista as chairman and Rowena Guanzon as commissioner.

Bautista, however, stepped down from the Comelec on October 23 this year after a public feud with his wife and before a full-blown impeachment hearing.

Less than a month after Bautista stepped down, Duterte named Bautista’s Comelec “batchmate” – one of the most junior members of the poll body – as the new elections chief.

Abas will serve Bautista’s unexpired term, which means he will still have to step down on February 2, 2022.

It still depends on the CA, however, if Abas will sit as Comelec chair.

Since Abas’ nomination came while Congress is in session, Duterte can only issue Abas’ appointment once the CA has given its consent, according to the rules of the CA, which screens the President’s nominees.

“What the President sends to the Commission is just a nomination. After the Commission has given its consent, the President issues the appointment. It is only when the last stage has been completed may the officer concerned take his oath of office,” said a briefer on the CA website.