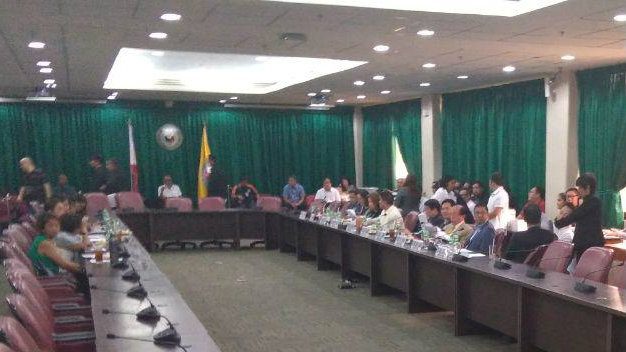 Facebook Twitter Copy URL
Copied
'We were surprised that they moved this huge an amount,' says Karlo Nograles, chairman of the House appropriations committee, as the bicameral committee on the 2018 budget meets

MANILA, Philippines – The first meeting of the bicameral conference on the proposed 2018 budget might have lasted a mere minutes but the discussions, lobbying, and arguments over possible amendments given the differences between the Senate and House versions showed that it would be anything but quick.

Members from both chambers of Congress met on Thursday, November 30, at the South Wing Annex of the Batasang Pambansa to convene for the first time.

The day before, the Senate passed its version of the 2018 budget two months after the House passed its own version.

Congress has until December 13, or when session is suspended for a month, to pass the budget on time. The contentious points – where the versions of the two chambers differ – involve large amounts.

Senator Panfilo Lacson pushed for the removal of over P68.7 billion from the Department of Public Works and Highways (DPWH) budget for 2018.

This amount is comprised of an P18-billion “lump sum” that the department could not disaggregate upon Lacson’s request, and another P50.7 billion from projects that had right-of-way issues. Senate finance committee chairperson Senator Loren Legarda only confirmed that the P50.7-billion cut was accepted by the Senate.

Speaking to reporters after the meeting, Lacson said legislators from both chambers of the House have been trying to speak to him or other legislators because projects in their district were affected by the cut.

Senator Cynthia Villar, mother of DPWH Secretary Mark Villar, is among those bothered by the DPWH budget cut. A project in her hometown of Las Piñas City will be affected – a fact she only learned of recently.

“[Lacson] cut a lot of things out because of right-of-way-problems but some of these don’t have right-of-way issues. There was just a misunderstanding between the DPWH and Senator Lacson,” said Villar. Secretary Villar represented Las Piñas in the House before he joined the Duterte Cabinet.

At the Senate, the amount cut from the DPWH projects instead went to the Philippine Drug Enforcement Agency (PDEA), teachers’ chalk allowance, feeding programs, and the Philippine Statistics Authority in preparation for the national ID system, said Lacson.

Davao City 1st District Karlo Nograles said he was “surprised” by the huge differences in the two chambers’ budgets, particularly with the DPWH cut.

“We were surprised that they moved this huge an amount. I would assume that these are continuing DPWH projects….Right now, I’m trying to temper my statements because I’ve not seen the items, the particulars on what was moved. But if I’ll just base it on the summary, the deductions they made are alarming,” said Nograles.

Nograles explained that road projects are typically divided into phases, funded by the national budget in the years the phases are implemented. Although he refused to go into detail, Nograles said that the P50.7-billion cut affects ongoing DPWH projects.

“If they disrupt the build, build, build programs, does this mean that they do not agree and do not support the program of the President?” added Nograles, a new member of the ruling PDP-Laban.

“Build, build, build” is the Duterte administration’s catchphrase for its massive infrastructure program.

Nograles denied Lacson’s insinuations that legislators were alarmed because the budget cuts affected their own pet projects. The Davao City legislator insisted that the projects were DPWH projects, not the legislators’. He also downplayed the practice of legislators recommending projects to the department.

There are other re-allocations as well. The Senate’s 2018 budget version  removes P900 million allocated for “Oplan Double Barrel” or the police’s war on drugs.

Instead, the funds were allocated for the uniformed services’ housing projects. The House version, passed before President Rodrigo Duterte made PDEA the sole agency for the drug war, retained the PNP’s P900-million drugs war budget.

The following are members of the bicameral contingents:

The committee decided to delegate powers to a “small group” – Legarda and Nograles – to thresh out the differences in the two versions. Legarda chairs the Senate finance committee while Nograles is House appropriations chairman.

Nograles said he and Legarda have agreed on when they will meet to discuss the budget. The two chairpersons are expected to give real-time updates to the contingent members.

“Remember, we finished this very early, as far as the House is concerned. And we submitted to the Senate the version of the House early on. And it took [the Senate] how many months, weeks to finish their version. And now, suddenly they finish close to the end of the year, and with so many adjustments for us to start studying now? You can’t just do it haphazardly. It’s not that easy,” explained Nograles.

Discussions by the “small group” will be done in private.

Legislators want the two chambers to agree on the final amendments by December 13, or the last day of session for the year. Duterte is expected to sign the proposed budget into law days after that. – Rappler.com