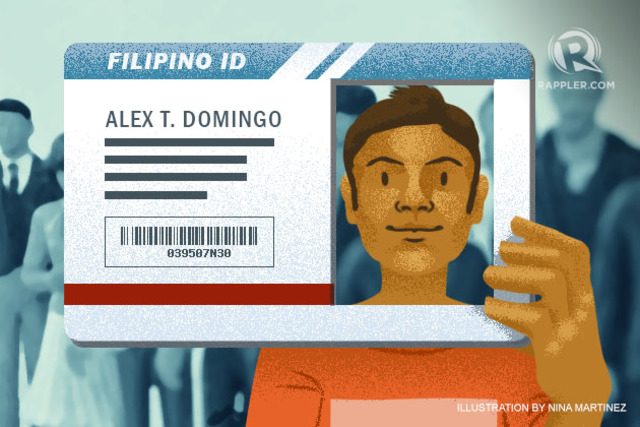 MANILA, Philippines – The Senate is eyeing the passage of the bill seeking to create a national identification system for Filipinos by early 2018.

Senator Panfilo Lacson, chairman of the subcommittee on the national ID system, said the proposed scheme would enhance the delivery of basic services to the public, as well as prevent crimes and expedite transactions in the private sector.

Lacson said the Philippines could be considered “primitive” for being one of the few countries that do not have national ID cards.

“I will make it a commitment to pass it at least sa (in the) first quarter,” Lacson told reporters after the hearing on Monday, December 4.

“[The] budget, I think the President now – the current administration is in full support, unlike in previous administrations na talagang bogged down lagi (when talks always bogged down),” he said, adding that the measure had not even reached committee hearings in the past.

To prepare for the rollout, the government has allotted P2 billion to the Philippine Statistics Authority (PSA) for 2018.

Back in September, the House of Representatives approved a similar national ID system bill on 3rd and final reading. The House version requires all Filipinos 18 years old and above, living here or abroad, to register personal data for their national IDs.

Under Lacson’s proposal, however, such identification would not be mandatory.

The senator said it would take more than 5 years for the Philippines to roll out the national ID system because it does not have the required technology yet.

(It depends on the available technology because sometimes, it’s expedited because there are agencies which already have the data in their system. It’s just a matter of integrating them into one system called the national ID system. Right now, the PSA is the agency in charge. But it takes a lot because the PSA does not have the technical or IT capability yet.)

Senate Minority Leader Franklin Drilon, who also backs the measure, addressed fears that it would violate the people’s right to privacy.

Drilon said the data to be included in the national ID system would not be different from the sets of information that are already present in government-issued IDs.

“We want to debunk, for the record, the claim that the bill may affect data privacy, as the pertinent provisions of the Data Privacy Act will still apply,” the senator said.

“There will be proper safeguards so as not to interfere with the individual’s right to privacy. It will also be ensured that unscrupulous persons will not have access to confidential information,” he added.

The PSA, through Undersecretary Lisa Grace Bersales, also dispelled fears of a possible breach of privacy. She said the agency has not had any breach in its data record.

Responding to a question from Lacson, Bersales said the issue is “a misplaced concern.”

Drilon explained that a Common Reference Number (CRN) will be given to all Filipinos. The national ID will contain the CRN, along with essential information such as the person’s full name, address, date and place of birth, sex, civil status, signature, and date of card issuance, along with a recent photo.

Drilon emphasized that a citizen would be able to use the national ID in transactions with all branches of government, making it more convenient for Filipinos to avail of public services.

The senator expressed confidence that the measure would be signed into law and implemented in 2018.

Both chambers of Congress have identified the bill as a priority measure of the 17th Congress. – Rappler.com