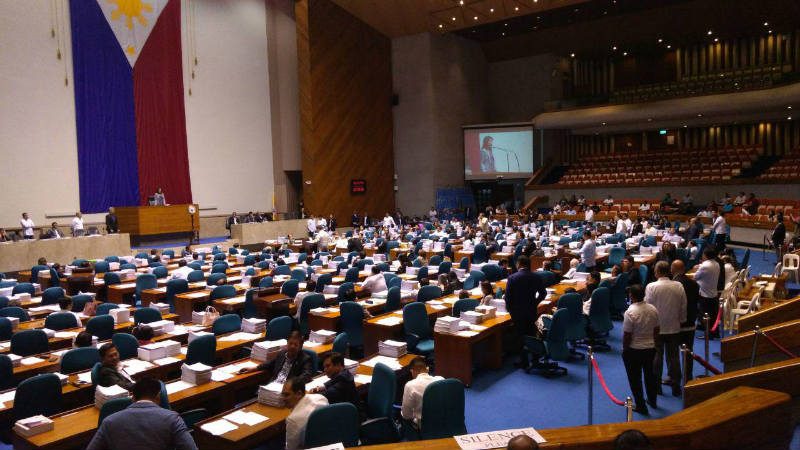 Facebook Twitter Copy URL
Copied
The House plenary approves the concurrent resolution on 2nd reading, saying it is 'deemed the most expeditious, open, and least costly among the options' in the Constitution

MANILA, Philippines – Philippine Congress is one step closer to revise the Constitution through a constituent assembly, after the House of Representative approved on 2nd reading House Concurrent Resolution (HCR) Number 9 on Tuesday, January 16.

The resolution pushes constituent assembly as the best means to rewrite the Constitution “since it is deemed the most expeditious, open, and [least] costly among the options,” according to Southern Leyte Representative Roger Mercado, chairperson of the House constitutional amendments committee.

At least 186 legislators responded to the call, the second during the Tuesday session. Members of the Makabayan bloc attempted to stop the motion to vote on the resolution, but they were not recognized since rules dictate questions cannot be entertained during voting.

Deputy Speaker Gweldolyn Garcia, who represents the 3rd district of Cebu, pushed through with the vote and declared that the “ayes” had it.

The Senate will have to concur for HCR 9 to take effect.

Discussions on the resolution began in 2017, just as Congress was about to take a month-long holiday break.

Mercado said 9 consultations were held across the country, emphasizing that Filipinos from all walks of life were involved. He said a “majority” of Filipinos consulted believe it was a “necessity” to revise the current Constitution for it to be more responsive to current needs.

“Recent events show that it is imperative that reforms be introduced in the present Constitution for it to be responsive to the exigencies of the times, including the need to provide a long-term solution to the decades-old conflict in Mindanao and to spur economic regional development in the countryside, and provide impetus to much needed socio-economic and political reforms,” reads the bill.

According to Deputy Speaker Raneo Abu, once the House approves the concurrent resolution on 2nd reading, and after they have an “open discussion (malayang talakayan),” the House will simply adopt it. There will be no 3rd reading to hurdle.

Cebu’s Garcia, who also spoke during the period of sponsorship, said she had earlier filed a measure advocating constitutional convention, but later realized that a constituent assembly was faster, cheaper, and offered more “safeguards.”

President Rodrigo Duterte has long been pushing for a shift to a federal system of government, arguing that this would spur development not only in the National Capital Region but in the rest of the country.

The House has been holding hearings, through the constitutional amendments committee and its subcommittees, to discuss how to amend the Constitution.

House members were told during a December 12 caucus that the resolution would be tackled during session on December 13. The caucus was primarily called so lawmakers could be briefed by the security sector on the need to extend martial law in Mindanao.

Congress is expected to convene as a constituent assembly by January 2018, according to PDP-Laban Federalism Institute executive director Jonathan Malaya. The institute earlier submitted its draft Constitution for federal Philippines.

There are 3 options to amend the 1987 Constitution. There’s the constituent assembly, which involves only members of Congress; a constitutional convention, whose delegates need to be elected; or a direct amendment through a people’s initiative, where the petition should have the signature of at least 12% of registered voters in the country, with a minimum percentage coming from every legislative district. – Rappler.com