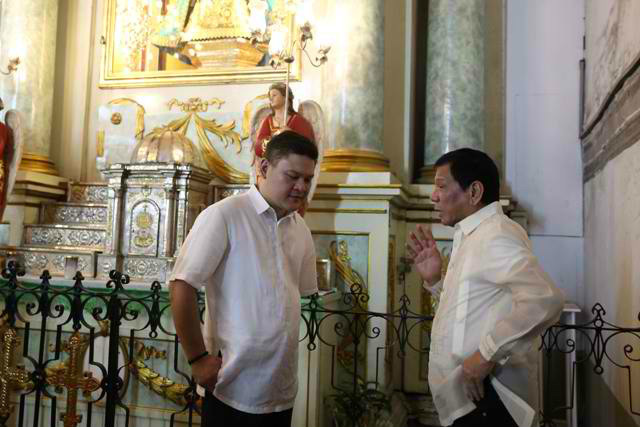 Speaking to reporters after Paolo announced his resignation before a shocked city council, Carpio refused to divulge what the President said during family discussions. She said it would be best to ask the President if he would want to speak about it.

“In his statement, he is clear about the reason he resigned. I understand where he is coming from: he is not entirely putting the blame on another person, but on his decision when he was younger,” the mayor said in a mix of English and Bisaya.

She said Paolo Duterte’s staff would be “moved to the city mayor’s office.”

The mayor said Majority Floor Leader Bernard Al-ag would be acting vice mayor until the city council accepts Paolo’s resignation. After that, they will follow the Local Government Code’s rules on succession, where the Number 1 councilor takes over the vice mayorship. Mabel Acosta got the highest number of votes for councilor in the 2016 elections.

The mayor said Paolo’s decision as vice mayor is “beyond my control,” but “I can only be here for my brother, to support him in whatever decision he may make” in his personal life.

As mayor, she said, she would assist him in the transition work in the city council.

Paolo, she said, would go “back to private life and spend time with his children.”

In October Paolo himself said he planned to retire from politics in 2019, and hinted at the possiblity of a  different “Carpio-Duterte” tandem in the next local elections.

“If you will ask me where will I go, I will be going back to farming. I am planning to retire,” he said in a press statement at the height of Senate investigations into the shabu smuggling controversy. – with Mick Basa/Rappler. com