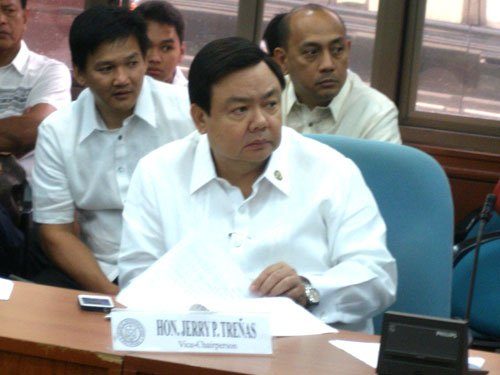 Facebook Twitter Copy URL
Copied
'It is part of the judicial process which should be respected. I will coordinate with the Office of the Speaker for its implementation,' says Iloilo City Representative Jerry Treñas

MANILA, Philippines – The Sandiganbayan ordered the 3-month suspension of Iloilo City Representative Geronimo “Jerry” Treñas over the graft case filed against him.

In a resolution dated January 3, the Sandiganbayan 7th Division ruled that the suspension of a public official charged with graft is mandatory even if he is already holding a different position.

Citing jurisprudence, Sandiganbayan Associate Justices Maria Theresa Dolores Gomez-Estoesta, Zaldy Trespeses, and Bayani Jacinto ruled that the anti-graft court must issue a suspension order once a graft case is found to be sufficient in form and substance.

“The Court possesses no discretion to determine whether a preventive suspension is necessary to forestall the possibility that the accused may use his or her office to intimidate witnesses or frustrate his prosecution, or continue committing malfeasance,” the ruling states.

“While the accused is now an incumbent Congressman of the City of Iloilo… it is emphasized that his change of office will not bar his preventive suspension.”

Treñas allegedly allowed the release of public funds amounting to P500,000 for the supposed construction of the Iloilo Press Club in 2003 when he was mayor. The case was filed only in October 2017.

Prosecutors from the Office of the Ombudsman said the money was taken from the Priority Development Assistance Fund (PDAF) of Senator Loren Legarda.

A copy of the suspension order has been delivered to the Office of House Speaker Pantaleon Alvarez for implementation.

In a statement, Treñas said he recognizes the authority of the court and will no longer contest the Sandiganbayan order. He said he would serve the period voluntarily.

“It is part of the judicial process which should be respected. I will coordinate with the Office of the Speaker for its implementation. I know in the end I will be cleared of all these charges since all legal processes were followed when the assistance was given to the Iloilo Press Club in 2003,” the lawmaker said.

Treñas was a member of the Liberal Party but shifted to President Rodrigo Duterte’s PDP-Laban. – Rappler.com