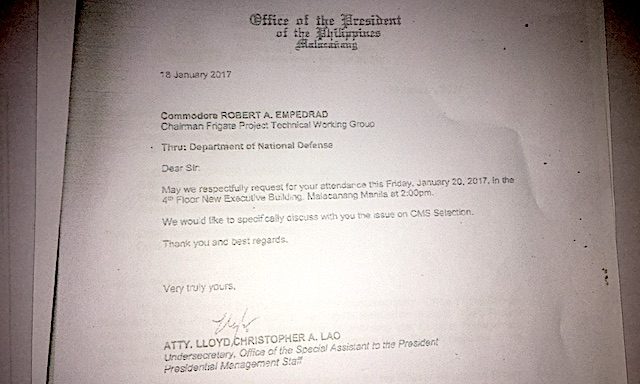 His designation, according to a letter signed by President Rodrigo Duterte on January 16, was effective on December 19, the day former Navy chief Vice Admiral Ronald Mercado was relieved from his post.

Empedrad is the Navy officer who was in charge of the controversial P15.5-billion frigate acquisition project, which, based on documents, Malacañang had been involved with.

Empedrad had been called to a meeting in Malacañang by an undersecretary in Special Assistant to the President Bong Go’s office to discuss the selection of the critical Combat Management System for the two frigates to be built by Hyundai Heavy Industries.

Go denied any involvement in the frigate deal.

It was supposedly former Navy chief Mercado’s insistence not to accept a suggested CMS supplier, Hanwha Thales, which led to his sudden relief from his post. – Rappler.com