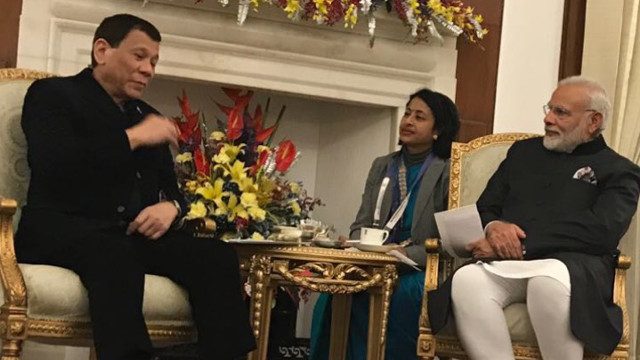 MANILA, Philippines (UPDATED) – After their bilateral meeting in New Delhi, Philippine President Rodrigo Duterte and Indian Prime Minister Narendra Modi witnessed the signing of two memoranda of understanding (MOU) – one on investments, the other on information technology.

Philippine Trade Secretary Ramon Lopez and Indian Ministry of External Affairs Secretary Preeti Saran represented their countries during the exchange of the MOU on investments.

The MOU was made between the Philippines’ Board of Investments and Invest India.

An MOU is a non-binding agreement. Malacañang did not elaborate on what type of investment or what sector the investments from India would focus on.

The second MOU is on developing the information technology (IT) and business process management (BPM) industry.

Made between India’s National Association of Software and Services Companies and IT & Business Processing Association of the Philippines, it is an expansion of an older MOU.

The expansion entails the formation of a council, composed of members from the two associations. The council is supposed to discuss and facilitate actions addressing challenges in the IT-BPM industry.

However, Duterte previously said he wants to make more Indian medicines available to Filipino consumers, impressed by the quality and affordability of these medicines.

More activities await Duterte and his delegation on Thursday and Friday (January 25 and 26).

On Thursday, he will join a lunch hosted by Indian President Ram Nath Kovind for Southeast Asian leaders.

After the lunch, he will participate in a retreat with other heads of state and heads of government.

The leaders will then be given a tour through the Mughal Gardens before participating in a Plenary Session.

On Thursday night, Modi will host a cultural program and banquet.

On this day, 11 commemorative stamps will be released to promote ASEAN-India ties.

On Friday, January 26, Duterte will join India’s Republic Day parade with the other Southeast Asian leaders and Indian officials.

After this, he will have a meeting with top Indian conglomerates.

On Friday afternoon, he departs for Davao City. – Rappler.com