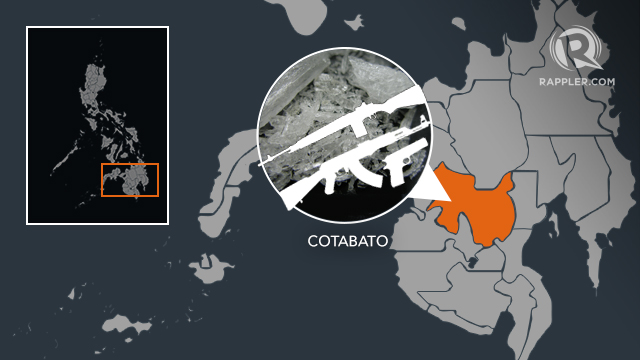 DAVAO CITY, Philippines – Anti-illegal drug enforcers on Monday, January 29, retrieved several firearms and substances believed to be shabu inside a staff house of the president of a a state-run school in Cotabato.

Raided was the staff house of Cotabato Foundation College for Science and Technology (CFCST) President Samson Molao, according to a report by RMN in Kidapawan City.

The operation stemmed from a search warrant issued by Judge Alandrex Betoya, the report added.

The incident, which was also reported by DXND in Kidapawan City, took place at around 3 am Monday.

Among confiscated were an M14 rifle, AK47 rifle, two .45 caliber pistols, 4 M16 rifles with bullets, a carbine rifle, 4 shotgon rifles, one magazine and a handheld radio, the DXND report said.

Authorites also 25 packs of what was believed to be shabu, with an estimated amount of P17,000 each.

Molao had previously been implicated in cases of frustrated murder, corruption, and management.

In 2016, hundreds of members of the Save CFCST Movement protested against him, after he was accused of plotting killing attempts against school personnel who were critical of his management.

In 2013, CFCST Vice President Deflin Plang Moreno, was gunned down. This happened after Moreno reportedly led a rally in the same year against the construction of a building which was hounded by controveries.

Years later, the House of Representatives led a probe into the alleged charges of corruption at the CFCST.

Authorities were not able to find Molao during the anti-drug operation.

Molao was appointed into the position in 2011, after serving as faculty of the University of Southern Mindanao. – Rappler.com