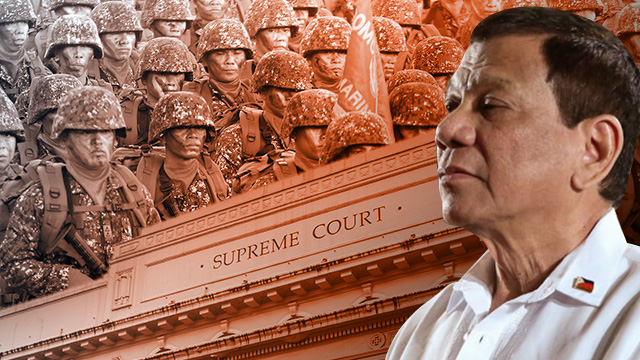 MANILA, Philippines – Lawyers who challenged the re-extension of martial law in Mindanao said on Tuesday, February 6, that the highest court of the land just allowed a proclamation of martial law “anytime, anywhere, ad infinitum and effectively without limitations.”

“The discretion is so unbridled that martial law can be imposed anytime, anywhere, ad infinitum and effectively without limitations other than the token formalities in the Constitution,” said Edre Olalia of the National Union of People’s Lawyers or NUPL, one of the 4 groups who petitioned the Supreme Court to stop the re-extension of martial law to yearend 2018.

The SC, voting 10-5, instead upheld it, saying that the “Constitution is silent on how many times Congress may extend a proclamation of martial law or the suspension of the privilege of the writ of habeas corpus.”

Olalia said that while the ruling was “not really totally unexpected,” it was “somehow still unbelievable.”

“The majority of the Court gifted the executive, especially its martial rulers, and the legislative undeserved full faith and confidence in the claim of the supposed factual basis and that its reason for being persists,” Olalia said.

Former solicitor general Florin Hilbay, who was also among the 4 groups of petitioners, said we are seeing the return to the dark era of the Marcos Martial Law.

“The SC has effectively overturned the intention of the framers of the Constitution to limit the use of martial law to the most exigent of circumstances and only in places of actual conflict. We’re just a step away from a nationwide martial law and a tragic repeat of 1972,” Hilbay said.

As Solicitor General Jose Calida said in his memorandum: Nothing – not the Supreme Court and not even the Constitution – can stop President Rodrigo Duterte and Congress from further extending martial law.

It is a view shared by the recent SC ruling: “(The Constitution) does not fix a period for the duration of any extension of a proclamation or suspension but expressly leaves the matter to Congress – ‘for a period to be determined by Congress.’”

What is there to be concerned about that? The lack of checks and balances, said Olalia.

“Then who is going to check independently whether the proclamation is whimsical, baseless or disproportionate? Who will stop his iron-fisted hand from doing the same thing in other parts of the country or even the whole country under the guise that there is a rebellion when there is none and that public safety requires it when it does not?” Olalia said.

The SC still retained its power of reviewing proclamations but “limited solely to a determination of sufficiency of factual basis.”

With that, the SC declared one more time that Duterte had sufficient factual basis to extend martial law, saying the rebellion in Marawi persists.

But how does the Supreme Court decide on sufficiency? Based on the President.

“Now the President’s judgment is practically absolute. And we are none the safer,” Olalia said.

According to the summary provided by the SC, the majority said the “claims of human rights violations are speculative.”

“When there is martial law, human rights violations follow as a matter of course.An ounce of prevention against repetition is better than a pound of cure for a violation,” Olalia said.

But the SC majority said safeguards remain to prevent human rights violations, such as resort to legal remedies like writs of Amparo and Habeas Data and the Universal Declaration of Human Rights.

“We would like to assure our people further that your AFP will faithfully perform its duty to protect the people and secure the state respecting Human Rights and International Humanitarian Law,” said military spokesman Colonel Edgard Arevalo. – Rappler.com