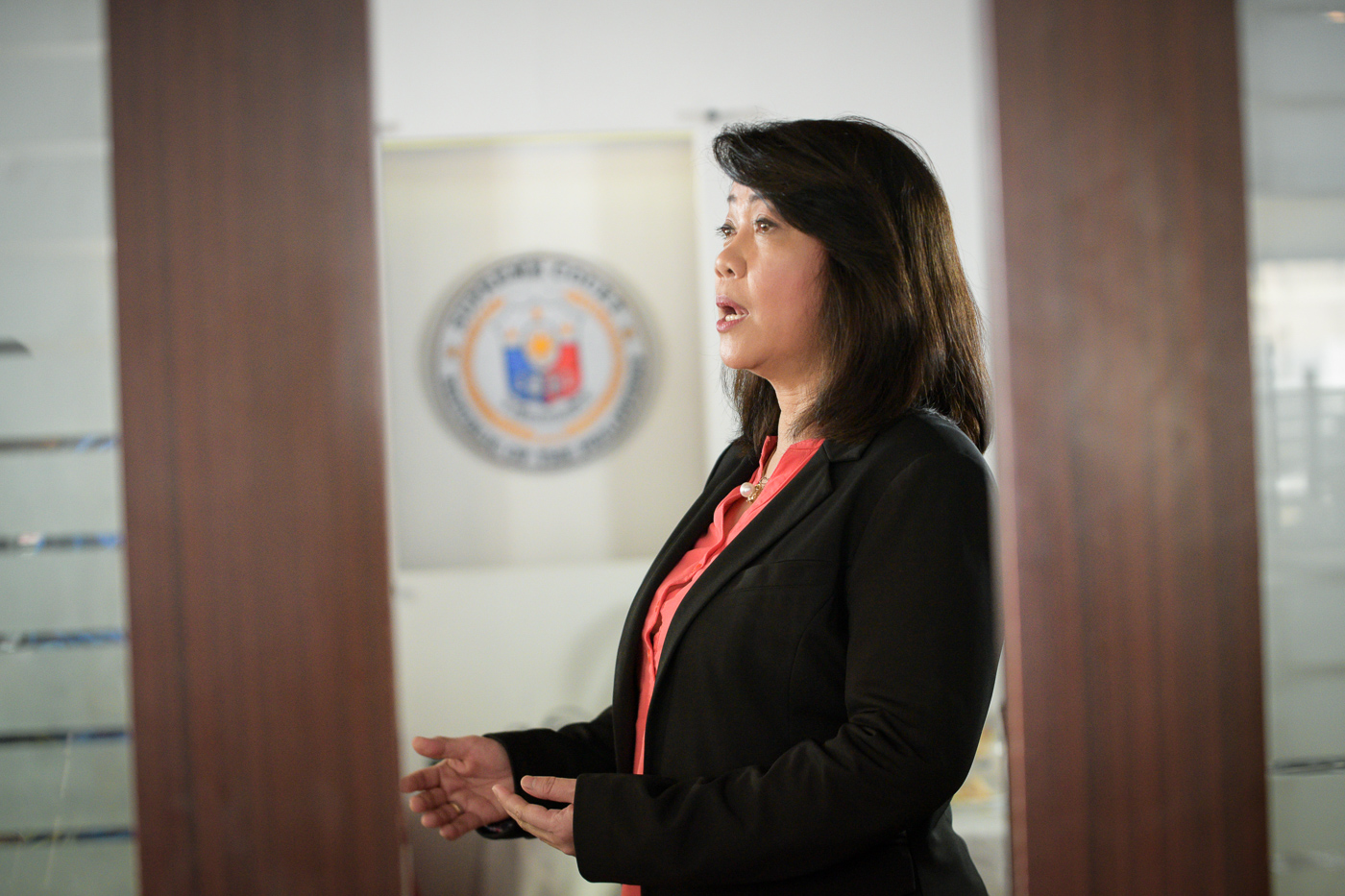 MANILA, Philippines – Supreme Court (SC) Chief Justice Maria Lourdes Sereno said that it was the controversial Information Technology or IT consultant Helen Macasaet who was able to secure billions of money which funded the court’s “grand” automation masterplan.

“With the help of Helen Macasaet, who really sacrificed a lot for the court, from that P600 million we were able to get (a budget allocation of) around P4.2 billion. That’s a more than 600% increase, because she was able to present to all the relevant actors in the Department of Budget and Management and even to those in Congress hearing the entire vision of the EISP, and the amounts of money it would need to push for this,” Sereno said in a one-on-one Rappler Talk interview on Thursday, February 15.

Sereno was referring to the Enterprise Information Systems Plan (EISP), which aims to digitize judicial processes to speed up case litigation, and more. Macasaet was hired as consultant for the EISP.

Macasaet earned around a total of P11 million for 4 years worth of contracts, getting as much as P250,000 a month. Macasaet’s terms of hiring is the subject of an internal investigation in the SC, and one of the grounds for impeachment against Sereno.

Issues hounding the hiring are alleged violation in procurement processes.

Macaset resigned in the heat of the impeachment threats against Sereno last year, but the Chief Justice said she would continue to push for the project, even reaching out to private consultants again if she has to.

The World Bank gave the SC P50 million to come up with a study of the EISP, a nationwide automation project for the judiciary. This started under the term of Chief Justice Hilario Davide.

Years later, Macaset was hired to be the chief architect to implement the entire project.  (READ: Sereno impeachment: Cracks in the Supreme Court)

So far, Sereno said 22% of EISP is operational. Those are the judiciary data center inside the SC headquarters in Manila, the disaster recovery site in Angeles City in Pampanga, and phase 1 of the infrastructure in the judiciary systems integration system.

Twenty-six (26%) is in the procurement level: these are the regional data centers in Tagaytay, Lapu-Lapu and Davao and digitization of court records among others.

The rest is in the pre-procurement level. “That’s quite a lot already,” Sereno said.

Sereno said that before her leadership, the SC spent the initial funds buying laptops, desktops, hardwares and softwares, which she called “minimal usage of the funds.”

“When I sat down, I said the vision is a grand one. We cannot allow ourselves as a people, having the best I.T profession in the world, having the best management information systems professionals in the world, to have this low-level technology being used. Nakakahiya, it’s so embarassing, it’s a disservice to our people. I said we should aim high, after all it’s a very expensive study in the beginning,” Sereno said.

Benefits for the people

The nationwide program aims to integrate and connect all 2,700 courts in the country, and digitize the process so no records are lost in times of disaster.

The disaster recovery sites would not only be in Angeles City, but spread throughout the country so no matter what happens, “the judiciary would not shut down.”

It would also provide convenience to Filipinos who would have transactions with the court.

(E-notification, you won’t need to go to the court to know the schedule of the hearings, all will be sent through SMS, email and an electronic site open to users. They will be able to schedule. Imagine the traffic, gasoline, the time it takes you to drive to the court, only to find out the hearing is postponed. That will not happen again.)

Sereno said that as of now, more than 290 courts are already electronic courts or e-courts.

“If we are able to successfully implement this, this would be the first nationwide enterprise resource platform of this magnitude and the kind of data storage it will take care of and the kind of efficiencies this will introduce, this is something very exciting, tinutukan ko po ito (I’m focused on this)” Sereno said.

Sereno said she considers the EISP as her legacy, and the criticisms against her and Macasaet will not deter her from pursuing the project.

(Don’t think about the noise, the obstacle, the criticism is not as important as the wholehearted dedication to get justice for the country. We cannot make the people feel justice without the automation program.)

Sereno says Macasaet’s contribution to the project was significant. “I have seen it,” she said.

One of the court officials who opposed Macasaet’s hiring was Carlos Garay, now the acting chief of the SC’s Management Information Systems Office (MISO). Garay said in the hearing he was confident of his capabilities to implement the project.

But Sereno said that with Macasaet gone, she would reach out again to the private sector.

“I will need to make a call to the private sector, after hearing what we have tried to explain, in the same way that I asked Helen to be open to sacrificing for the country,” Sereno said.

She added: “Para sa bayan, pwede n’yo ba kaming tulungan, kasi napakaganda ng pangarap namin, para naman sa tao ito. (For the country, can you help us, because we have a good dream, and this is for the people.) – Rappler.com