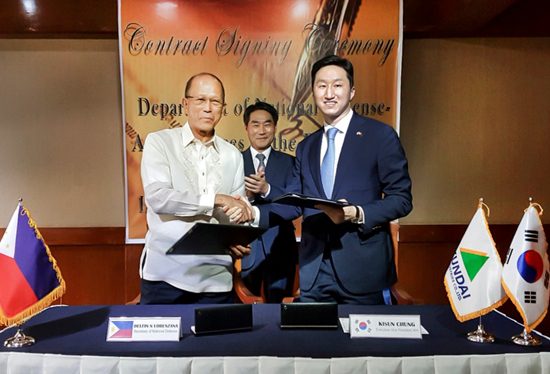 Facebook Twitter Copy URL
Copied
The problem begins during the administration of President Rodrigo Duterte, after the P15.7-billion deal was signed in October 2016

The other project is the acquisition of a squadron of 12 fighter jets for the Philippine Air Force, which is already completed.

Controversy over the frigates deal erupted after former Philippine Navy chief Vice Admiral Ronald Mercado was unceremoniously ousted in December 19, 2017  for alleged “insubordination” over the implemention of the project.

At the heart of the issue is the Combat Management System (CMS), a computer system called the heart of warships because it integrates real-time data from the ship’s sensors and data from other parties or other navies necessary to provide situational awareness at sea.

Mercado stood by the decision of the Navy Technical Working Group that the maker chosen by the winning bidder Heavy Hyundai Industries (HHI) for the CMS of the ships failed to meet the technical specificials specified in the contract.

Here’s a timeline of the Navy’s frigates acquisition project (FAP).

May 22, 2013 – Aquino announces an initial P75-billion fund for a modest modernization of the Armed Forces of the Philippines as he confronts China’s aggressiveness inside the country’s Exclusive Economic Zone.

October 2013 – The Department of Nationals Defense opens bidding for two brand new frigates for the Philippine Navy, one of two big ticket modernization projects of the Armed Forces of the Philippines. It had an approved budget of P18 billion.

May 2016 – Presidential elections in the Philippines. Rodrigo Duterte is elected President.

June 2016 – The DND reveals to the media that GRSE was “post disqualified.” The second lowest bidder and the only other qualified bidder at that point, Hyundai Heavy Industries, passed the post-qualification tests. The other bidders called on the DND to defer awarding the contract to the new administration.

June 30, 2016 – Rodrigo Duterte is inaugurated as the new President of the Philippines

January 4, 2017 – Philippine Navy chief Vice Admiral Ronald Mercado writes to Lorenzana to question a fine print in the contract with Heavy Hyundai Industries, where it claimed “sole right” to decide the makers of the subsystems that will be installed in the ship.

January 12, 2017 – In Malacañang, Lorenzana receives a white paper endorsing the CMS supplier chosen by Hyundai. He sends the white paper to Mercado with a Post-it note saying it came from Bong Go. Lorenzana instructed Mercado to rebut the white paper.

January 18, 2017 – Undersecretary Christopher Lao, who works at Go’s office, writes the Navy officer in charge of the frigates project to invite him to a January 20 meeting in Malacañang to discuss the CMS selection.

January 23, 2017 – Empedrad submits a written report to Malacañang explaining the selection of the CMS. It was addressed to Duterte and Go.

March 1, 2017 – Mercado writes to the Defense Acquisition Office chief retired Colonel Leodegario Dela Paz to inform him that the Navy “cannot endorse the HHI CMS selection for the PN frigates.” Mercado asserted that “as long as the bid proposal of Thales does not go beyond the HHI price proposal for CMS during the Submission and Opening of Bid Envelopes (SOBE), Thales bid should be considered as selected by the PN. Letters were exchanged in the following months to debate the selection.

August 10, 2017 – Lorenzana writes former AFP chief General Eduardo Año to discuss the problem with the Navy’s frigates, explaining that Hyundai has “sole right” to choose the maker of the subsystems of the frigates based on the contract agreement. Lorenzana noted that both Tacticos Thales and Hanwha Systems were declared compliant during the post-qualification stage.

November 3, 2017 – DND Undersecretary Cardozo Luna writes a memo ordering Mercado to “refrain from fruther communications… relative to the CMS issue with caution that this Department will not entertain any communications or pleadings bearing on the same issue.” Luna warned him of possible “disciplinary action” if he further “trifled” with the department’s directives.

November 6, 2017 – Mercado confirms receipt of Luna’s memo. He said the Navy will “proceed without haste on the execution of the project as per contract agreement.”

November 28, 2017 – DND Steering Committee chairman Undersecretary Raymundo Elefante writes to Mercado about the Navy’s failure to submit the Check List for the Technical Inspection and Acceptance (TIAC), a document necessary to proceed with the project.

December 19, 2017 – Mercado is removed as Philippine Navy chief because of alleged “insubordination” over the frigates project. Empedrad succeeds him in the post.

December 22, 2017 – In South Korea, Hyundai Heavy Industries is banned from participating in government projects due to a bribery conviction. The country’s Supreme Court affirms a ruling that was handed down back in 2013 that the company appealed. (READ: Bribery scandal hounds Korean firm tapped for PH Navy warships)

January 2018 – Controversy over the frigates project erupts as documents obtained by the media show Go’s intervention in the selection of the CMS. Lorenzana says he has forgotten about the white paper and claims he only wrongfully assumed that it came from Go. (DOCUMENTS: How Bong Go is linked thrice to the frigates deal)

February 19, 2018 – The Senate begins a probe into the Navy’s frigates project. – Rappler.com