DAVAO CITY, Philippines – In a real-life situation, ending a terror crisis in the Philippines can stretch for months, as shown by the Marawi siege. On Wednesday, February 28, Davao City officials showed how they planned to end an attack in just over an hour.

The “Southern Storm” drill began at exactly 7:20 am but for drill purposes, the time was supposedly 11 am, 30 minutes after Abreeza mall in this city opened its doors to customers. Outside the mall, a jeepney unloaded 6 men, one of them with a backpack that was placed near pedestrians waiting for their ride.

As soon as the men entered the mall, the backpack “exploded,” killing two people. Ten minutes later, a medical team arrived to attend to the casualties, while police checked for traces of explosive devices. As mall security coordinated with the Davao City Police, the voice of a furious lady mayor could be heard talking on the phone, asking for details. Meanwhile, the terrorists took several hostages inside the mall. The police chief alerted the military about the attack. Mayor Sara Duterte-Carpio, played by actress Jaycee Parker, arrived at the command post, where she was told that the suspects could be members of the Maute Group. (READ: LOOK: Ex-Viva Hotbabe Jaycee Parker plays Sara Duterte in terror drill)

SWAT men entered the mall and took their positions to neutralize the terrorists. Meantime, another terrorist attack was unfolding over Davao’s skies. People watching the simulation exercise were told to watch the video on the screen, which showed a man killing a pilot who refused his request to divert a Davao-bound flight to Indonesia.

Minutes later, the Air Sakurai plane made an emergency landing in Davao City. Police broke into the plane and shot at the armed men, believed to be part of the group of terrorists in the mall.

Back at the mall, gunshots were heard along with the screams of hostages. The fastfood crewmember was bathed in blood as the armed men shouted, “Allahu Akbar!”

On the phone, the mayor gave an order to the SWAT team to attack the terrorists. There should be no negotiations, she demanded. Two hostages were rescued, while 4 terrorists were killed. Two terrorists who escaped were chased by the Navy and were also neutralized.

Two suspects were arrested, and the mayor finally announced that the crisis was over. 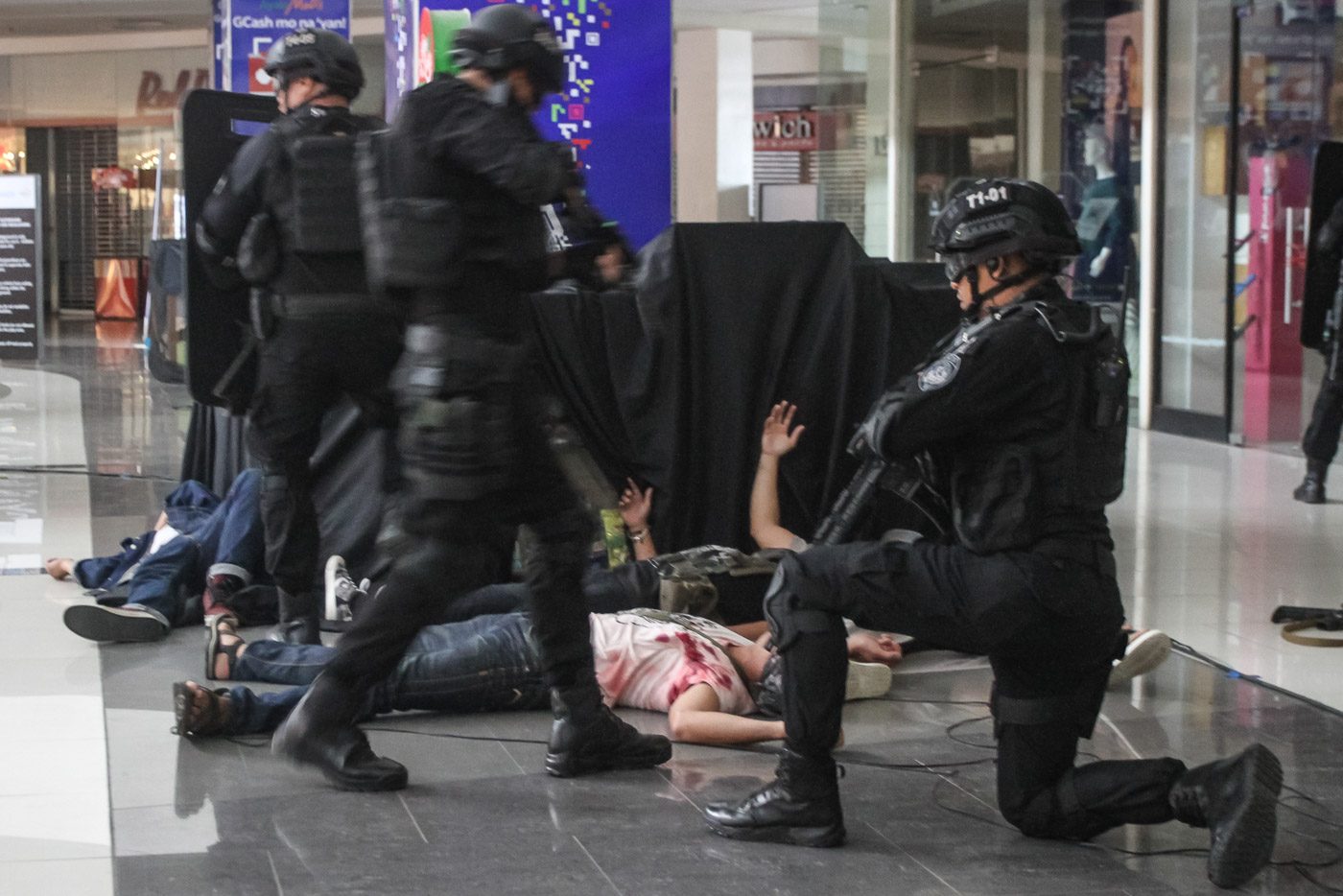 After the mayor’s press conference, a “fire” broke out in the mall. The Bureau of Fire Protection simulated an operation, and declared fire out in under 20 minutes.

The entire drill lasted for about an hour and a half.

Philippine National Police chief Director General Ronald dela Rosa was among the officials who watched the drill. He gave authorities a score of 9.5 out of 10, saying  he didn’t want to give a perfect 10 “because they might take the rating as a reason to be complacent.” The drill, called “Southern Storm,” was a simulation of how cities should handle acts of terror and first held in Davao City, authorities said. Davao, after all, is no stranger to terror attacks. (READ: A history of bombings in Davao City)

PNP Director General for Operations Camilo Pancratius Cascolan said the drill would help strengthen coordination among concerned agencies. “We can strengthen that,” he said.