Mar 5, 2018 12:28 PM PHT
Lian Buan
Facebook Twitter Copy URL
Copied
All will be watching SC justices, especially the group known to be constitutionalists, and how they will act on this very crucial episode in the judiciary's history 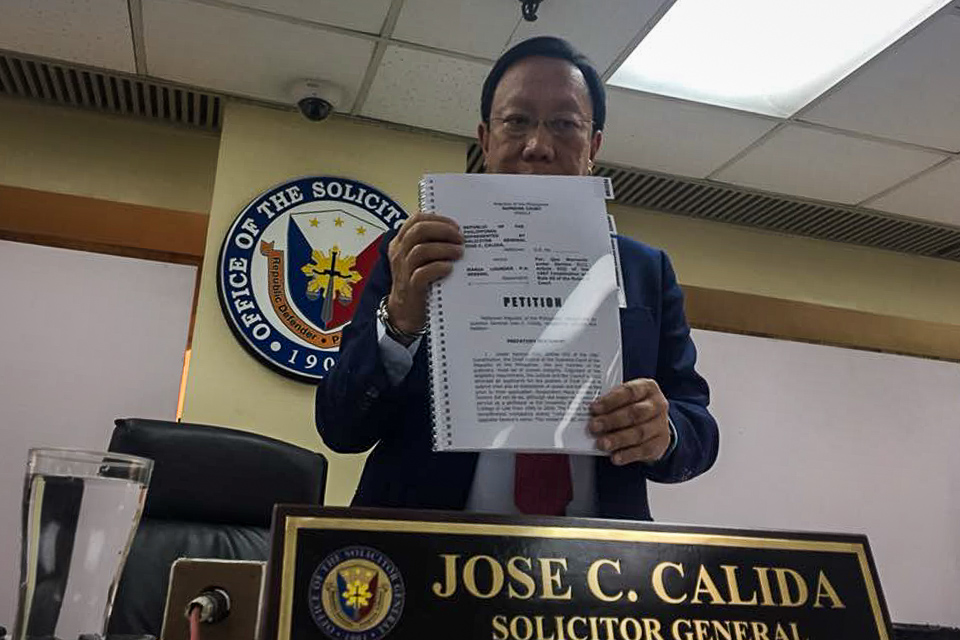 Calida is authorized under Rule 66 of the Rules of Court to begin action for a quo warranto, a proceeding which will determine somebody’s right to hold public office.

The Solicitor General is transmitting this to the SC en banc. If he gets what he wants, the en banc will judge the Chief Justice’s fate.

Calida, claiming his petition is an act of kindness, told Sereno: “You said you want to have your day at the Senate impeachment court. The Office of the Solicitor General will not allow you to undergo the indignity that the late Chief Justice Renato Corona suffered at the hands of politicians who unjustly convicted him. You do not deserve that.”

Corona was found guilty of betraying the public trust and committing culpable violation of the Constitution in May 2012. Twenty senators voted for his conviction, while 3 voted for his acquittal.

“Let your peers decide it, who know you and the Constitution better,” Calida said.

Is quo warranto proper? The Rules of Court empowers a solicitor general to begin a quo warranto action. The SC, meanwhile, exercises original jurisdiction over quo warranto proceedings under Section 5, Article VIII of the Constitution.

But, and this is a big but – Section 5 only mentions ambassadors, public ministers, and consuls. Under the Constitution, Sereno as chief justice can only be removed through impeachment.

Calida believes he has basis to pursue a quo warranto track rather than impeachment. The same provision empowers the High Court to exercise original jurisdiction for quo warranto cases, among others, the Solicitor General said.

Quo warranto is recognized as an extraordinary legal remedy sanctioned not only by the rules of court, law and jurisprudence but by the Constitution itself.

A quo warranto petition, according to Calida, is the “proper remedy to question the validity of Sereno’s appointment.”

What happens to impeachment process? Calida will not be filing a petition for a temporary restraining order (TRO) against the impeachment proceedings at the House of Representatives. He has also not submitted official communication to the House, which is set to vote at the committee level on Thursday, March 8, whether or not to impeach Sereno.

“They can proceed with their impeachment, but insofar as we’re concerned, the proper is quo warranto,” Calida said, adding that the House must “yield” to the SC if the en banc comes out with a decision. The quo warranto proceeding he is seeking is separate from the impeachment complaint with the House.

What are the grounds? It is anchored on the accusation that Sereno did not file all the necessary Statements of Assets, Liabilities, and Net Worth (SALNs) when she applied for the chief justice post in 2012.

Citing Section 7(3), Article VIII of the Constitution which says a member of the judiciary “must be a person of proven competence, integrity, probity and independence,” Calida said Sereno’s appointment was void.

He also cited Section 17, Article XI on the accountablity of public officers. The provision requires the submission of SALNs as often as may be required by the law, or Republic Act (RA) No. 3109.

“Unfortunately for respondent Sereno, she flunked the test of integrity when she failed to file more or less 10 SALNs,” Calida said. The SALN issue is also the tipping point of the justices, who then pressured her to go on an indefinite leave.

Calida said the impeachment proceeding is based only on the assumption that Sereno is a lawful chief justice.

Has the period lapsed? Albay 1st District Representative Edcel Lagman cited Section 11, Rule 66 of the Rules of Court which says a quo warranto proceeding should begin within one year of an appointee taking office. Sereno has been Chief Justice for 5 years now.

In his 34-page petition, Calida said: “This limitation does not apply to the petitioner. It has an imprescriptible right to bring a quo warrant petition under the maxim nullus tempus occurit regi which means, ‘no time runs against the king.'” Calida is saying there is no time limit imposed on the State.

Is there precedent? In 1949, petitioner Nacionalista Party wanted to declare as void the appointment of Vicente de Vera as Commission on Elections (Comelec) chairman on the ground that it was a reappointment prohibited by the Constitution.

A Comelec chairman is an impeachable officer, and though the SC in that case denied the Nacionalista Party’s petition, the justices said this in their ruling: “The ground invoked by the petitioners would be proper in quo warranto proceedings but not in a petition for prohibition.”

That pertinent part of a 1949 ruling is being invoked by Calida now.

Will the SC take action? We do not know, but as early as now, there are doubts as to whether the SC will be fair to Sereno.

Testimonies at the House, a unified public stance, and justices showing up in red in the first flag ceremony without Sereno raise concerns of conflict of interest.

All will be watching the SC justices, especially the group known to be fierce constitutionalists and how they will act on this very crucial episode in the judiciary’s history. – Rappler.com