Facebook Twitter Copy URL
Copied
'For every tokhang victim, there is a woman wailing beside,' says human rights lawyer Neri Colmenares. These same women will take the Duterte administration, and perpetrators and enablers, to account

MANILA, Philippines – Nothing  pierces the heart so deep as the pain parents feel when they lose a child.

Nanette Castillo has felt it. It has numbed her. On October 2, 2017, she lost her son Aldrin, who was shot to death by unidentified men on motorcycles just across their house on Herbosa Street, Tondo, Manila.

Nanette slumped beside him on the street, feeling every last bit of warmth escaping his body before it was taken by funeral workers. She was hysterical – cursing the cops who did not bother to call an ambulance, even hastily blaming her daughter for asking Aldrin to come to their home in Tondo in the first place.

“I knew he was dead, but I still wanted to bring him to the hospital. I was hysterical. I screamed at the police – you sons of bitches, are you God?” she recalled in Filipino.

On Wednesday, March 7, Nanette counted it as the 157th day since that gruesome night. She counts every single day without Aldrin, describing each day without him “only heavier than the day before.”

She spoke before lawyers and law students at “Rise, Resist, Unite against Tokhang and Tyranny,” a forum on the human rights implications of President Rodrigo Duterte’s war on drugs, organized by a new network of lawyers, Mga Manananggol Laban sa EJK or MANLABAN sa EJK.

Many have told Nanette that it was futile to pursue a case against Aldrin’s killers, who have remained unidentified to this day. But she is hopeful, even confident, that there is more to this catharsis than just grieving and letting go.

She is not afraid to admit that Aldrin used drugs. Not once had he been involved in trouble anyway, she said. Aldrin is neither listed in the barangay watch list nor does he have any criminal records in the Manila Police District.

In fact, the 32-year old bachelor was supposed to go to Saudi Arabia to work as a professional welder had he not been killed. Both unemployed, Nanette and her husband relied mostly on Aldrin’s support. “He was never a burden to us,” Nanette said. “Maybe in the eyes of Duterte he is a plague, but to us, Duterte is the plague.”

Speak for other women 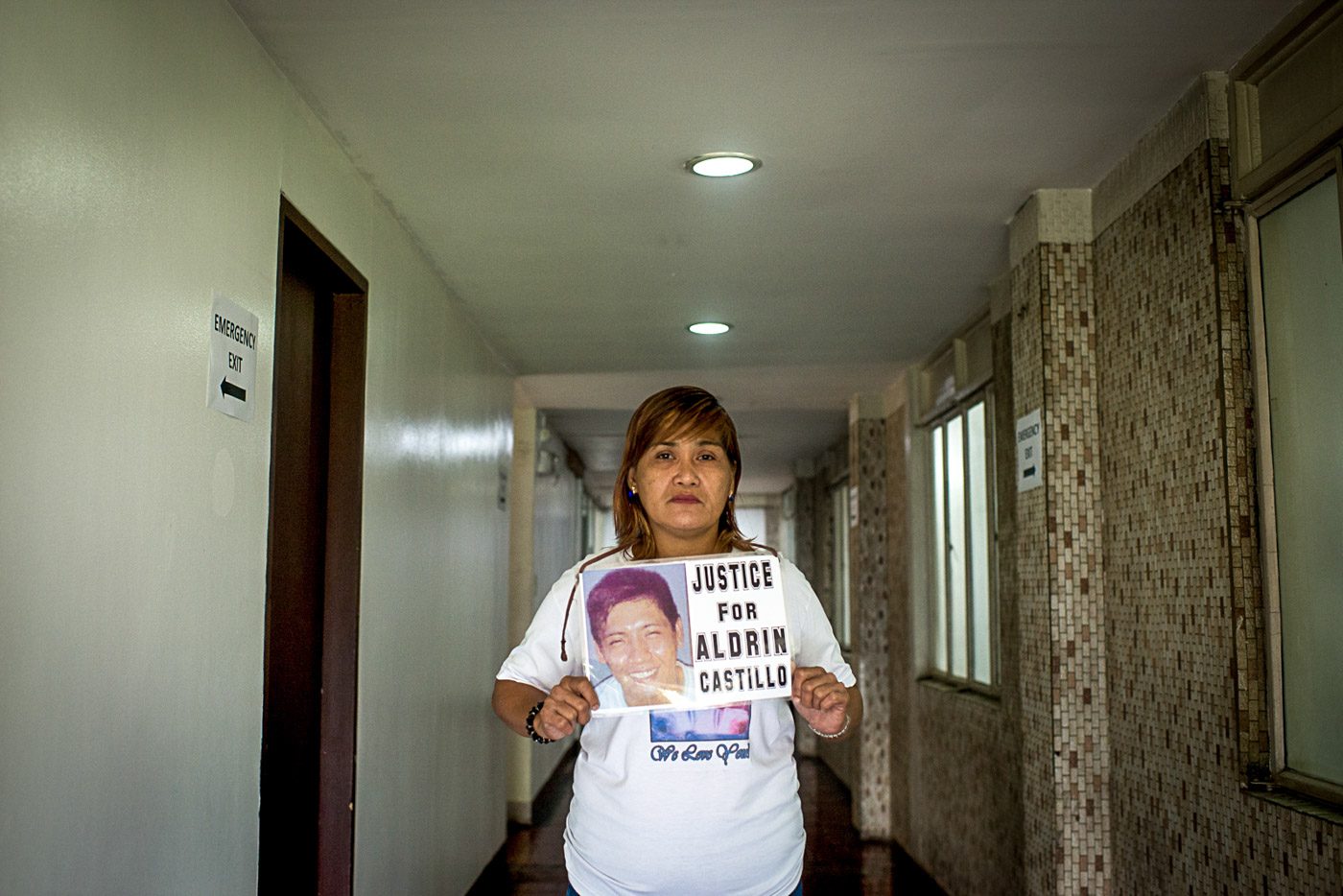 While Nanette is far from finding justice for Aldrin, she remains vocal about her story of victimization, especially after working with faith-based group Rise Up for Life and for Rights.

She tells Rappler speaking out is the least she could do for her son. But, more importantly, she says she speaks on behalf of those who cannot, or who would not, speak.

“Other victims are scared,” Nanette said. “I want them to be empowered, I want mothers to be enlightened. You have to stand up because you are victims, you have nothing to be afraid of. And even if you aren’t victims, you should speak up.”

Indeed, Nanette is but one of the thousands of women who are left to “claw their way out of bereavement, anger, marginalization, and poverty.”

“For every tokhang victim, there is a woman wailing beside,” Colmenares said. “Out there are ten thousand mothers who have borne the personal brunt of the loss of a husband or a child.”

“It’s the women who will be picking up the breadwinner’s mantle and teaching the children how to cope with grief and anger, with dignity and honor. It will take feisty and consistent female courage to take this administration, and perpetrators and enablers, to account,” he added.

Nanette seems to be an exception to this statement, as she does not need much courage to do what she does. She tells herself she’s gone through the worst. “What do I have to be afraid of, when I’ve already lost my son?”

“This is why you can’t bully me, Duterte. I cannot be bullied” Nanette said.

But with thousands of mothers and daughters left behind, there are only few like Nanette who could face the camera to speak out against the killings.

Angela (not her real name), a mother like Nanette, opts to go a different way – the legal way.

Unlike Nanette, Angela is certain that cops are responsible for her son’s death because he was arrested at a checkpoint a few days before he was found dead in a morgue in Manila.

Confident that her son was innocent, Angela found herself investigating the case, finding links to clarify the puzzling death of her son.

She fought hard to get copies of police reports and CCTV footage, even if it meant sending out 60 letters of request.

She was determined to pursue her fight, but she questioned herself: “How do I defend my son who did not even do anything wrong?”

Angela is now represented by the NUPL, specifically Attorney Krissy Conti, who has been involved in cases of extrajudicial killings related to the drug war.

As a woman herself, Conti says it has been easier for mothers to connect and share their stories to her, knowing full well that there is a common understanding between women.

“The female factor is the trust given to you by mothers because they know you can relate – which I dont see with their relations with male lawyers. They are stiff and formal with male lawyers, but with women lawyers they are relaxed,” Conti said.

Conti said she understands the plight of these women, knowing that it is most painful for any parent to predecease a child. This is why women will be the “moving force” of this fight against extrajudicial killings, she said.

Conti said it would be a challenge for women, however, to communicate their issues to the sexist President Duterte. She wonders how Duterte would deal with the issue of so many wailing women who will come to him.

“He doesn’t listen because he’s a populist, and we only have one, two, three [women speaking out]. If 5,000, 10,000 women would pester him, things might change,” Conti said in Filipino.

With more and more women victimized by Duterte’s war on drugs, Conti said there is a need to double the effort women to come together. “Mothers and daughters share empathy differently,” she said.

To organize, Conti and her fellow advocates against EJKs coined the term “WoManlaban” to engrave what it means for every woman to fight in this war on drugs. It also a play on the word “nanlaban” (fought back), the reason almost always cited by cops for killing drug suspects.

Women hold families together, Conti said, so it will be inevitable for other members of the family to join their mothers or sisters in this fight.

“To WoManlaban, you bring in your entire family into your struggle as well,” Conti said. “When a woman fights, she fights not only for herself but for others, and she brings in others into the fight as well.” – Rappler.com