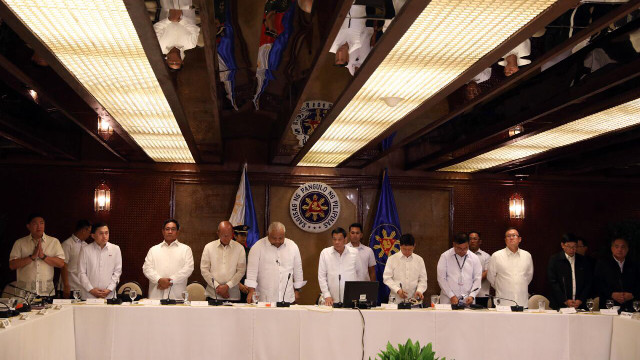 MANILA, Philippines (UPDATED) – A frustrated President Rodrigo Duterte declared he himself would review the dismissal of the drug charges against Peter Lim, Kerwin Espinosa, and Peter Co if the Department of Justice (DOJ) affirms the dismissal.

Presidential Spokesperson Harry Roque said this in a post on Facebook on Tuesday, March 13. He was quoting Duterte who was at the time presiding over a command conference with military and police.

“I will invoke my power of supervision and control and will review dismissal,” Duterte supposedly said, as quoted by Roque who was also present at the command conference.

Justice Secretary Vitaliano Aguirre II was supposed to review the dismissal by the DOJ panel of prosecutors. It is unclear if, given Duterte’s remarks, Aguirre will no longer be reviewing the case.

Duterte also threatened that heads will roll if the dismissal is affirmed.

According to Roque, the President told Aguirre: “‘Pag nakawala ‘yan si Lim at Espinosa, siya ang ipapalit ko. I can review that dismissal order. Nag-amin na nga sa Congress! Why not admit it as evidence against him?”

(If Lim and Espinosa get away, I will replace him. I can review that dismissal order. He [Espinosa] already confessed in Congress! Why not admit it as evidence against him?)

Roque has not yet replied to Rappler’s question seeking clarification on who Duterte said he would replace.

But another official present at the command conference said that the President was only joking that he would place Aguirre in jail in place of Lim and Espinosa if the charges against the two are dropped.

“Ang sabi niya, kung makalaya yung dalawa, si Sec Aguirre ang ipapalit niya sa kulungan (He said if the two are allowed to get away, he will replace them with Aguirre in jail). Of course, as usual, it was said in jest,” said the official.

Roque also shared on social media that Aguirre had just formed “a new investigation panel to review [the] case vs Lim and Espinosa.”

Earlier, Malacañang said it would support the refiling by the Philippine National Police (PNP) of drug charges against Lim, Espinosa, Co, and Lovely Impal with additional evidence.

The Palace admitted it was “concerned” about the dismissal since it was Duterte himself who accused Lim, Espinosa, and Co of being drug lords. (READ: Robredo: How can DOJ clear self-confessed drug lord Espinosa?) – Rappler.com