Will Napoles be state witness? Spotlight on the Special Prosecutor 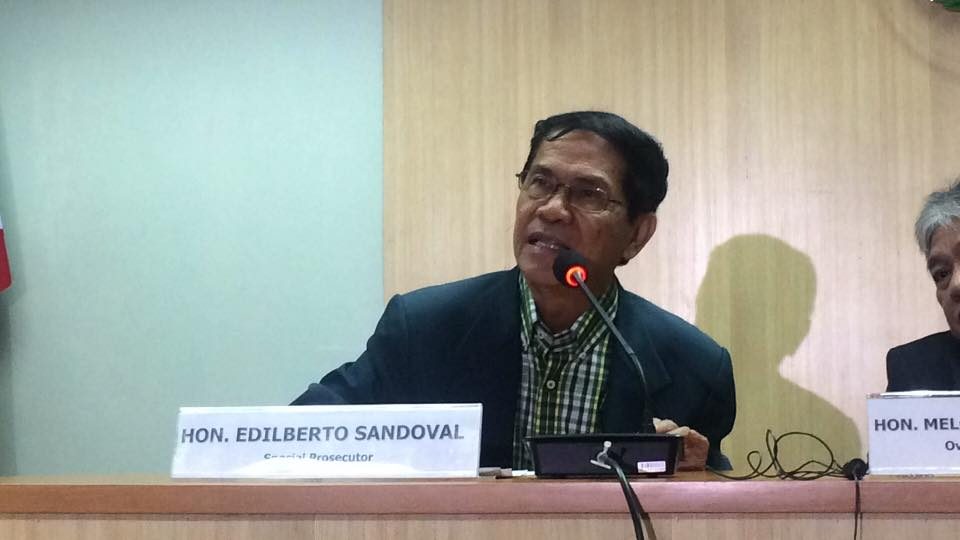 MANILA, Philippines – The spotlight is now on Special Prosecutor Edilberto Sandoval, who, under the rules, is the first recommending authority if Janet Lim Napoles will indeed be turned as a state witness.

Napoles is now under state protection but she is far from being a state witness, a possibility that Justice Secretary Vitaliano Aguirre II has long seriously considered in his pork barrel scam reinvestigation that targets members of the opposition Liberal Party and its allies.

But to make Napoles state witness in the pending pork barrel scam cases before the court is out of Aguirre’s hands. (READ: FACT CHECK: What can Aguirre’s DOJ do in the Napoles case?)

“So his next step here would be to pressure the Office of the Special Prosecutor under the Ombudsman to drop Napoles from the list of the accused and make her a state witness,” Senator Leila de Lima said on Saturday, March 17.

What’s the process? Aguirre as the Department of Justice (DOJ) Secretary can put anyone under the Witness Protection Program (WPP), but all that does is give the person state-funded protection like security, and medical and financial assistance.

Being a state witness where you are cleared of all charges in exchange for full cooperation is something else.

The Revised Rules of Criminal Procedures states that it’s the Office of the Ombudsman as the prosecutors of the pork barrel scam that will petition the anti-graft court Sandiganbayan to declare Napoles as state witness. The Sandiganbayan will have the final say.

But before it reaches Ombudsman Conchita Carpio Morales for approval, the first person who will recommend is Sandoval, who is the Special Prosecutor.

What are Sandoval’s powers? Sandoval served as the Sandiganbayan justice for 15 years, one year of which was as presiding justice of the court.

He was appointed by President Rodrigo Duterte as Special Prosecutor in July 2017 and has a fixed 7-year term until 2024.

Aside from recommending state witnesses, the Ombudsman law also expressly grants Sandoval the power to enter into plea bargain deals.

“Malacañang can easily undermine the Special Prosecutor’s independent judgment in this case, and force him to drop Napoles as an accused,” De Lima said.

What happens after Morales retires? Morales will retire in July.

The Judicial and Bar Council (JBC) is now accepting applications and recommendations for the Ombudsman post.

Sandoval can, in fact, apply to be the next Ombudsman which would put another person to the Special Prosecutor post.

It was Calida who recommended to the Court of Appeals to acquit Napoles in the serious illegal detention case filed against her by Benhur Luy.

What happens when Napoles becomes state witness? The setup remains unclear at this point. (READ: PDAF cases, Duterte-time: Napoles confident of freedom ‘in less than 2 years’)

De Lima pointed out that even if Napoles becomes state witness, she would be a state witness against former senators Juan Ponce Enrile, Jinggoy Estrada, and Bong Revilla.

Calling the 3 senators “Duterte allies,” De Lima said: “This goes against the very purpose of Aguirre and Malacañang in making Napoles a state witness, which is to implicate opposition legislators and personalities in the PDAF scam.”

In earlier interviews in 2017, Aguirre said Napoles will be treated as a complainant in fresh cases that will be investigated by the DOJ. But Aguirre admitted that the results of the investigation will still be transmitted to the Office of the Ombudsman, who has primary jurisdiction.

What happens now? Napoles’ lawyers have filed a motion before the Sandiganbayan to move Napoles out of Camp Bagong Diwa in Taguig City and into “WPP custody.”

The motion will be heard by the Sandiganbayan on Monday, March 19.

“How the DOJ will go about performing this legal calisthenics is what we should be vigilant about. They already took the first step in the exoneration of the mastermind of the PDAF scam,” De Lima said. – Rappler.com