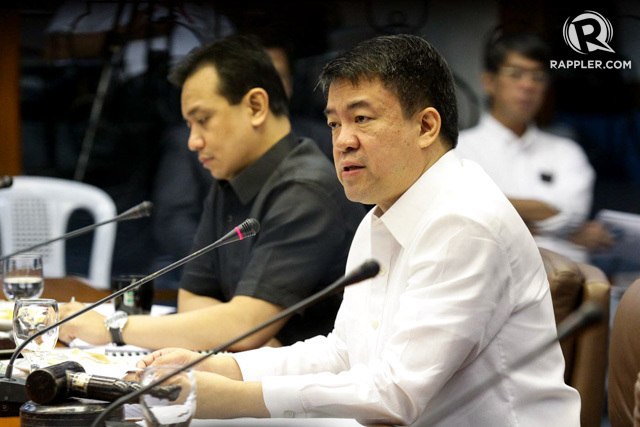 MANILA, Philippines – A staunch ally and a fierce critic of President Rodrigo Duterte clashed on Wednesday, March 21, on the issue of Senate concurrence with the Philippines’ withdrawal from treaties.

Trillanes hit Malacañang’s statement that the Rome Statute, the founding document of the ICC, is invalid because it was not posted in the Official Gazette. According to the opposition senator, there is no such policy.

He cited Executive Order No. 459, signed by former president Fidel Ramos, providing for the guidelines in the negotiation of international agreements and their ratification.

EO 459 only requires that the Senate concur with the ratification by the president, and that after concurrence, the Department of Foreign Affairs (DFA) “shall comply with the provision of the treaties in effecting their entry into force.”

“Let me just put on record, nothing in this EO showed that there is a need for the treaty to be publicized in the Official Gazette. Aside from that, I would like to manifest that for as long as the senators or 2/3 of the total number have concurred [with] the withdrawal, such withdrawal of Duterte [from the] ICC is void from the start,” Trillanes said.

The Senate could have had a say in the ICC withdrawal but a resolution, signed by 14 senators, was blocked by neophyte senator Manny Pacquiao, a Duterte ally.

Pimentel opposed Trillanes’ claim that Senate concurrence is needed in treaty withdrawals, saying the 1987 Constitution does not state that.

Trillanes, however, said it is in the Constitution “by implication.”

“I submit but the Senate President will agree with me, the framers of the Constitution overlooked a lot of things. That’s why there are clamors from certain groups to amend, maybe this is just one of them,” Trillanes added.

“That is my position, that an important decision such as a withdrawal from an international treaty should be given as much weight as entering [it].”

But Pimentel disagreed, saying the framers “intentionally limited the role of the Senate.”

“For me, nothing was overlooked in this provision…. My position is it’s dangeous to always assume… that it was overlooked by framers. If it is not here, it was intentionally omitted by framers of the Constitution,” Pimentel said.

Senate Majority Leader Vicente Sotto III, meanwhile, told Trillanes that the Philippines is paying the ICC roughly P25 million yearly, and asked what benefit that has brought the country.

Trillanes replied: “That’s for the future. It’s a contribution to, basically, an international organization that overlooks the ending of the culture of impunity globally. With the case now, ito na ngayon ang mapapala natin (here’s how we’ll now benefit), we get to benefit from those earlier contributions.”

Duterte’s decision to leave the ICC came after the court announced it will conduct a preliminary examination of the Philippine government’s bloody drug war.

The ICC has said that the withdrawal would not derail the probe. (READ: Int’l Criminal Court ‘encourages’ PH gov’t to reconsider withdrawal) – Rappler.com