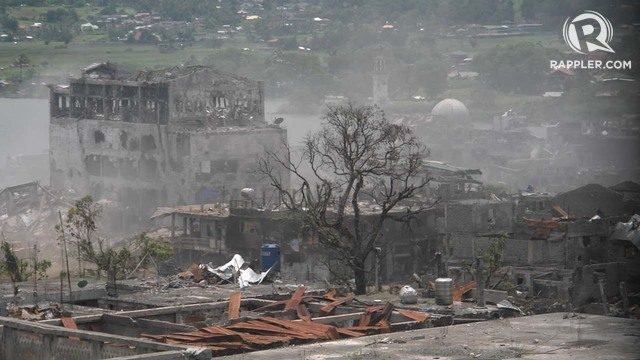 Facebook Twitter Copy URL
Copied
Here's a list of the companies that form the Bangon Marawi Consortium, whose rehabilitation proposal was chosen by the government and will be subjected to a Swiss challenge

MANILA, Philippines – The government task force in charge of overseeing the rehabilitation of Marawi selected the proposal of a Chinese-led consortium for the rebuilding of the most heavily damaged part of the city.

The consortium, called the Bangon Marawi Consortium (BMC), is composed of 5 Chinese companies and 4 Filipino ones.

The first 5 in the list are Chinese companies while the last 4 are Filipino companies.

China State Construction Engineering Corporation Limited is run by the Chinese government and is said to be the largest construction company in the world in terms of revenue.

China Geo Engineering Corporation is a construction company, supposedly the world’s largest international contractor. It was involved in major water infrastructure projects in Africa, specifically in Ghana and Mozambique.

Anhui Huali Construction Group Company Limited, meanwhile, is a contractor specializing in housing, with its headquarters located in Hefei, China.

TBEA Company Limited, meanwhile, is another Chinese firm that “researches, develops, manufactures, and sells transformers, switches, cable accessories, and electric wire and cable products worldwide,” according to a company profile on Bloomberg.

There are not much details about Future Homes PH Incorporated, save that it is supposedly based in the Philippines.

A Brown Company Incorporated is a publicly-listed company “engaged in real estate, agribusiness, power generation, and infrastructure,” according to its website.

It is the developer of subdivisions like Mangoville in Cagayan de Oro, Valencia Estates in Bukidnon, and Coral Resort Estates between Cagayan de Oro and Iligan City.

HS Pow Construction and Development is a Filipino construction and engineering company which has completed projects like the Mactan Shangri-La Hotel and Resort in Cebu and J Centre Mall, also in Cebu.

It was also tapped to build structures at the Emperador Distillers plant and to construct the towers of the Kasara Urban Resort Residences in Pasig City.

SDW Realty & Development Incorporated is another Filipino company into design and construction of office spaces, restaurants, and retail spaces, among others.

Consultations on the ground

Including the BMC’s proposal, the government received 5 unsolicited proposals for the rehabilitation of the 250-hectare main battle area in Marawi City, said Del Rosario.

The Selection Committee recommended the BMC proposal which was then also later on approved by Del Rosario, following certain criteria.

“They were ranked based on the parameters we have set as standard such as project costs, terms of payment, overall conceptual design, timelines, responsiveness to minimum requirements, and the capacity to undertake the whole project,” Del Rosario told Rappler.

However, he emphasized that the BMC will only be chosen with finality after Task Force Bangon Marawi conducts consultations “on the ground with all stakeholders.”

The BMC’s proposal will then undergo a Swiss challenge in which other interested parties can come up with a better proposal to be considered by the government.

The task force has been criticized for not involving Marawi residents in making decisions about how the rehabilitation of their city should be undertaken.

But Del Rosario gave assurances that the process has been transparent.

“These steps were undertaken for utmost transparency and [to] protect the interests of the government,” he said.

Any housing project in Marawi’s affected areas, and the developers chosen for the job, will enjoy an exemption from the National Economic and Development Authority (NEDA) guidelines on joint venture agreements granted by President Rodrigo Duterte through Executive Order (EO) No. 49.

The EO says such projects need only follow guidelines set by the National Housing Authority (NHA), with the help of the HUDCC, NEDA, Department of Budget and Management (DBM), and Public-Private Partnership (PPP) Center. These guidelines were published online last February 11.

Duterte granted the exemption in order to “expedite” the reconstruction and rehabilitation efforts in Marawi.

Duterte has also declared that government projects under his watch will be awarded through a Swiss challenge and not through public bidding, claiming that the latter is open to abuse. – Rappler.com