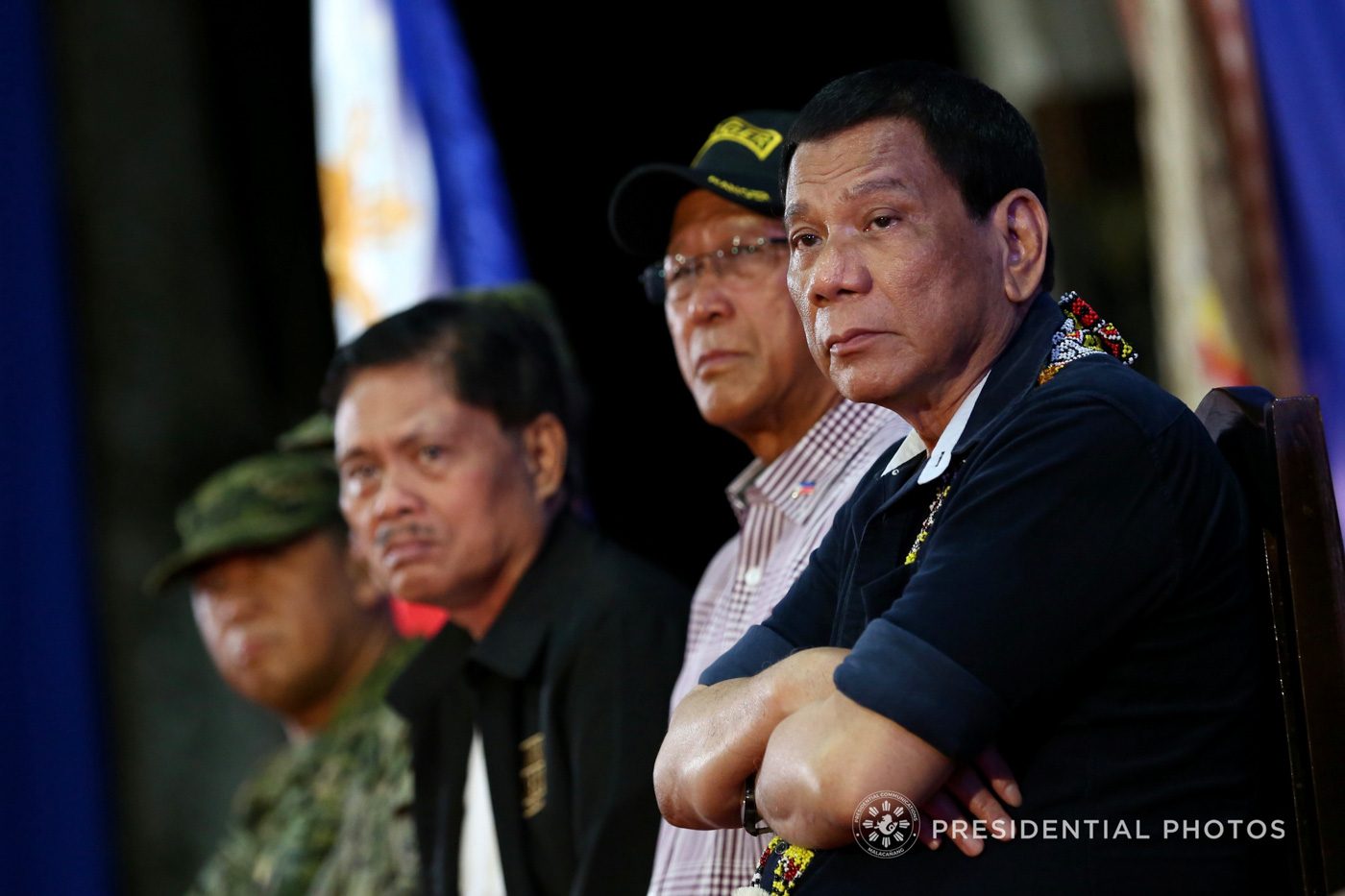 President Rodrigo Duterte on Tuesday, April 3, expressed openness to resuming peace talks with communist rebels. But he laid down several conditions, including a bilateral ceasefire agreement that would silence the guns until they have a final agreement to end the armed conflict. (READ: Joma to Duterte: We are ready to resume peace talks ASAP)

The Communist Party of the Philippines (CPP) and its armed wing, the NPA, are behind Asia’s longest running communist insurgency. Duterte promised to end the insurgency during his term, but talks have been on and off since last year.

Duterte’s change of heart comes amid the military’s claims that over 4,000 NPA combatants and supporters have surrendered to the government.

(There should be no movements. We want the ceasefire agreement to also prohibit the collection of what they call revolutionary taxes. I call it mere extortion.)

Lorenzana dismissed claims by CPP founding chairman Jose Maria Sison about a draft ceasefire agreement supposedly ready for signing last year. Sison is the chief political consultant of the National Democratic Front (NDF), the group representing the rebels in talks with the government.

“As far as we are concerned it doesn’t exist kasi hindi namin nakita ‘yun (because we haven’t seen it),” the defense chief said.

If the peace talks do resume, Lorenzana said it is only reasonable to drop terror charges against the rebels and their supporters.

(Let’s see what happens to discussions about resuming peace talks. If we talk to them, I don’t think it’s right to tag them as terrorists if the talks are sincere. If they’re not sincere, we pursue the tag.)

What’s the DND and military position? Lorenzana, backed by the military, had taken a firm stand against resuming talks. He said he doesn’t think the NPA supports the peace process, accusing the communist armed group of defying the NDF led by Sison.

“It’s a political decision. Whatever the position of the President will be, we will support…. Ang masasabi ko lang (The only thing I can say is), we’ve been here many times before. We know how to deal with the situation regardless,” said Armed Forces of the Philippines (AFP) chief General Rey Guerrero.

With Duterte’s pronouncement, Lorenzana said the rebels should “prove their sincerity.”

“Sabi ko nga, kailangan magpakita ng sinseridad bago magpatuloy (They need to show sincerity before we resume negotiations). We are not closing doors to the peace talks,” he said.

What’s Lorenzana’s concern about a ceasefire? The defense chief said it appears that the “ground” doesn’t support NDF efforts to resume talks, the same allegation the previous Aquino administration also cited when it suspended talks with the rebels.

The communist rebels were recently blamed for the burning of heavy equipment in Davao City.

“Definitely, hindi nakakatulong ‘yun (violence doesn’t help),” said Guerrero. “How could you say you are talking peace if there is violence happening around you?”

“Ang question ko (My question is): Do they have control over their fighters on the ground? That is the question I was asking even before,” the defense chief said.

Why did the talks collapse? Talks were promising in 2016. The military and the NPA silenced their guns from August 2016 to February 2017 or a good 6 months when separate unilateral ceasefires were in place in support of the peace talks. (READ: The end of the affair? Duterte’s romance with the Reds)

A prolonged ceasefire was unprecedented. An end to hostilities is typically expected only after a final agreement. But the rebels agreed after concessions from Duterte, including the release of supposedly high-ranking communist leaders from prison.

“Nakalamang sila. Tayo wala tayong nakuhang pakinabang doon (It was advantageous to them. We didn’t get any benefit from the ceasefire),” Lorenzana said.

“Ang gusto namin bilateral ceasefire para mayroong mechanism to check who is violating what. Wala kami problema sa control sa tropa natin, even police at military, dahil we have this chain of command,” he added.

(What we want is a bilateral ceasefire so there would be a mechanism to check who is violating what. We have no problems with control over our troops, the police and the military, because we have this chain of command.)

The NPA withdrew its ceasefire declaration in February 2017, but hoped for a “talk while fighting” scenario. This angered Duterte, and he scrapped the talks altogether. – Rappler.com