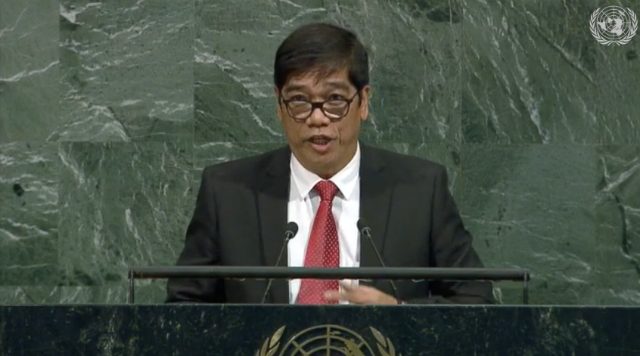 Facebook Twitter Copy URL
Copied
'As of the end of 2016, road crashes kill an average of 31 people a day and is a major cause of death for our youth. This figure shows a 40% increase in the number of deaths compared to 2006,' Catanduanes Representative Cesar Sarmiento says at a plenary meeting of the UN General Assembly

MANILA, Philippines – The Philippines is having a “hard time” reducing deaths from road crashes despite efforts to curb casualties, a Philippine lawmaker told the United Nations General Assembly (GA) during the second regular session of its 82nd plenary meeting in New York on Friday, April 13 (Manila time).

Catanduanes Representative Cesar Sarmiento, chair of the House transportation committee, made the statement as he conveyed the concern of Philippine authorities about the difficulty of achieving the global target of slashing road crash fatalities by half in 2020.

“We are very concerned that, with the current rate of progress, halving the number of global road crash deaths and injuries by 2020 may not be met,” he said.

In the case of the Philippines, he said, “we are also having a hard time meeting the target.”

“As of the end of 2016, road crashes kill an average of 31 people a day and is a major cause of death for our youth. This figure shows a 40% increase in the number of deaths compared to 2006,” the lawmaker said.

In 2010, the GA adopted a resolution that urged member-states to curb traffic deaths and injuries by 50% by 2020. The recently-adopted Sustainable Development Goals also affirmed this target.

The Philippines sought to achieve this by launching the Philippine Road Safety Action Plan in 2011, which was later updated in November 2017. (WATCH: Rappler Talk: Are Philippine roads safer in 2017?)

Despite the action plan and policies passed, road crash fatalities continued to climb over the years. In 2015, a total of 10,012 people died due to road mishaps across the country. (READ: IN NUMBERS: Road crash incidents in the Philippines)

Sarmiento said, however, that there is a need to “strengthen our resolve” to meet the global target. He expressed the Philippines’ support for the UN draft resolution on improving global road safety, which the GA adopted that day.

“We take special notice as well of actions cited in the resolution that we believe will address the road safety issue on a cultural level. This is what is needed in the Philippines – to create a culture of road safety among our people,” he said.

The draft resolution recommends that member-states ensure political and financial support to achieve the target, and to intensify law enforcement. The resolution also encourages member-states to stop producing unsafe cars. (IN PHOTOS: How new jeepneys, buses, tricycles could look like) – Rappler.com