‘Senate must pick up fight vs contractualization’ – Hontiveros 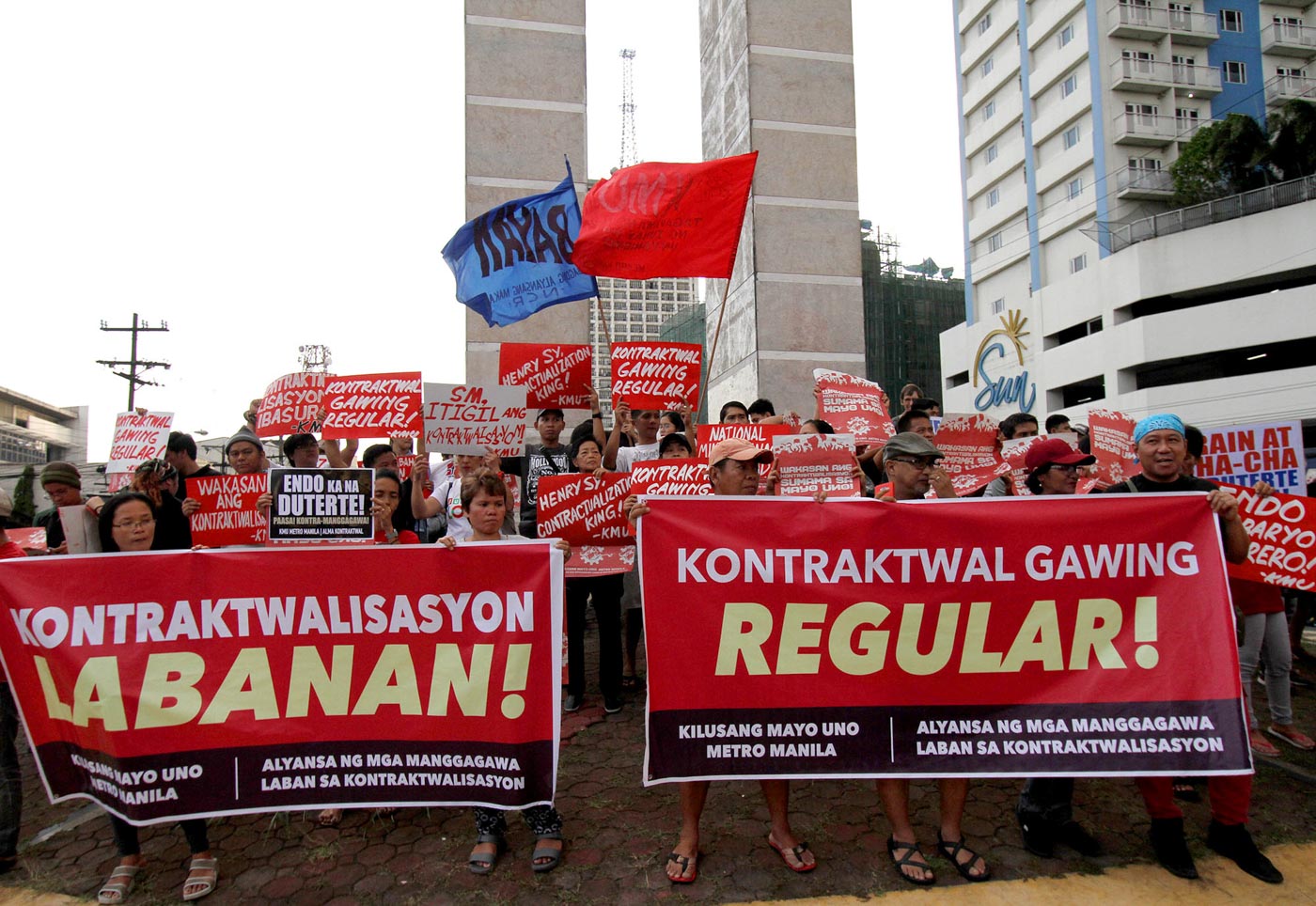 MANILA, Philippines (UPDATED) – Senator Risa Hontiveros urged her fellow senators to speed up the passage  the security of tenure bill, after what she called the unsurprising  decision of President Rodrigo Duterte not to issue an executive order (EO) against contractualization.

“After much hemming and hawing, the President decided not to issue an EO against labor contractualization. President Duterte effectively threw in the towel in the fight against ENDO and abandoned the Filipino working class,” Hontiveros said in a  statement on Friday, April 20.

Hontiveros said the President’s decision is not surprising since “this is the same President who waved the white flag in surrendering our sovereignty and territory to the Chinese, and who admitted that he cannot control the drug problem.”

“Now, President Duterte capitulated to the lobby of those opposed to the creation and protection of regular jobs. With the President abandoning the Filipino workers, the Senate must pick up the fight against labor contractualization,” the opposition senator said.

On Sunday, April 22, Vice President Leni Robredo called on workers and employers to find a middle ground on the issue of contractualization.

In her radio program, Robredo said she is aware of the concerns of both workers and employers on the issue.

She cited workers who criticize government for letting this practice prevail, and employers who say their businesses could lose money – and competitiveness – if the policy is too strict.

The Department of Labor and Employment (DOLE) announced on Thursday, April 19, that there will no longer be an EO against endo and asked Congress to prioritize the passage of the security of tenure bill instead.

Senator Joel Villanueva, Senate committee on labor and employment chair, welcomed the “President’s certification” as this will “help in the passage of a new law governing endo.”

“We still expect Malacañang to issue an EO to provide the framework and guidance for the implementation of a national policy on contractualization. We should know the clear position of the executive on this matter. We want to ensure that what we are legislating is useful and effective,” Villanueva said on Thursday.

Meanwhile, labor groups maintained that an EO is still better than the President’s crackdown order on labor-only contracting.

In a statement on Saturday, Sentro ng mga Nagkakaisa at Progresibong Manggawa said that it welcomes the order, but only if the President signs the latest version of the labor-drafted EO.

“A crackdown on labor-only contracting can never substitute for the issuance of an EO. By itself, the ‘crackdown’ may not lead to anything,” said Sentro vice chair Daniel Edralin.

In a memorandum, Duterte ordered Labor Secretary Silvestre Bello III to draw up an inventory of companies engaged in labor-only contracting, a reiteration of DOLE’s job to apprehend establishments employing illegal labor practices.

Sentro said that inventory “would be highly understated” as Department Order (DO) Number 174 “effectively allows labor-contracting.”

DOLE issued DO 174 to set “stricter” guidelines against contractualization, which allows labor-only contracting if the companies have sufficient capital and equipment. Labor groups had argued that this order allows “legal endo.” (READ: Keeping ‘endo’ alive: DOLE’s Department Order No. 174)

Duterte was supposed to sign the EO back in February but it was later postponed to March 15. Labor groups were promised that a signing will happen on April 16, but to no avail.

Earlier in April, Malacañang admitted it cannot end contractualization by itself as that would require action from Congress. The House of Representatives approved the security of tenure bill on 3rd and final reading in January.