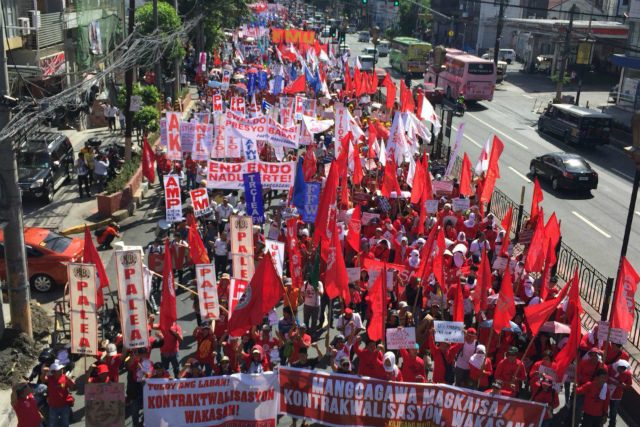 MANILA, Philippines – On Labor Day, thousands of workers protested and were dismayed by the executive order (EO) signed by President Rodrigo Duterte. They said it “backs employers” and not Filipino workers.

On Tuesday, May 1, Mendiola was filled with around 20,000 protesters clad in red shirts – the biggest rally so far under the Duterte administration.

Joined by the major labor groups Nagkaisa labor coalition, Kilusang Mayo Uno, and Sentro, among others, the groups marched to the historic site to condemn contracting schemes employed by establishments, which Duterte promised to end by issuing an EO.

In Cebu, Duterte signed an EO on Tuesday, supposedly ending contractualization. But the labor groups said it was not the draft they prepared and negotiated with the labor department.

“The EO that was signed definitely is an EO for the employers, not for the workers. We will not waver, we will continue to fight to give justice to workers affected by the widespread contractualization of labor,” Rene Magtubo, Nagkaisa labor coalition spokesperson, told Rappler.

Duterte did not sign the 5th version of the labor-drafted EO on April 16, as a crucial provision in the draft was contested by the Department of Trade and Industry.

What was signed on Tuesday took out the sentence in question, which is part of the EO’s Section 2, a key provision in the landmark order. It was read by Labor Secretary Silvestre Bello III during the ceremony:

“SECTION 2. Prohibition Against Contracting or Subcontracting. Contracting or subcontracting when undertaken to circumvent the workers’ rights to security of tenure, self-organization, and collective bargaining and peaceful concerted activities pursuant to the 1987 Philippine Constitution is hereby strictly prohibited.”

In the original labor-drafted EO, Section 2 indicated that direct hiring should be the “general norm in employment relations.” The copy of the EO is yet to be made available to the media:

“Consistent with the policy of this government, direct hiring of the employee by the principal employer shall be the general norm in employment relations.”

Labor groups felt “they were taken for a ride” by the President, as negotiations went on for more than two years. (READ: TIMELINE: Duterte’s promise to abolish endo)

(Negotiations went on for two years. Three presidential dialogues. 5th draft. After that, without any consultation, he signed a different EO. It’s dismaying, that’s why we condemn this action.)

Magtubo also said that if the President “was committed” to sign a labor-drafted EO, Duterte should have consulted them.

Duterte was supposed to sign the EO back in February but it was later postponed to March 15. Labor groups were promised that it would be signed on April 16, but it didn’t happen.

Earlier in April, Malacañang admitted it could not end contractualization by itself as this would require action from Congress. The House of Representatives approved the security of tenure bill on 3rd and final reading in January.