May 7, 2018 4:25 PM PHT
Lian Buan
Facebook Twitter Copy URL
Copied
It raises the question of how Ben Tulfo’s Bitag Media Unlimited Inc. got the contract to produce the flagship show of the Department of Tourism (DOT), and how much and in what way they are paid 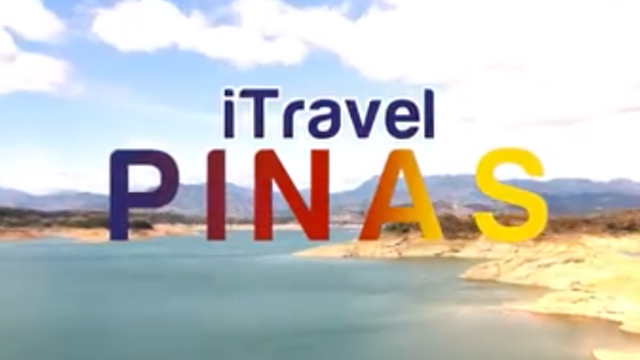 MANILA, Philippines – Is this another case of conflict of interest?

The flagship program of the Department of Tourism (DOT), the travel show I Travel Pinas, which airs over state-run channel PTV, is or was produced by Bitag Media Unlimited Inc (BMUI), social media postings indicate.

Bitag is owned by Ben Tulfo, the brother of Tourism Secretary Wanda Teo. The Tulfo siblings and Teo’s tourism department are embroiled in a controversy after the Commission on Audit (COA) flagged P60 million in advertisement placements paid by PTV to Bitag.

Bitag’s social media postings indicate that they produce I Travel Pinas which started airing on PTV in March 2017. For example, Bitag’s Facebook page lists I Travel Pinas as one of its “equities.” There is a page for I Travel Pinas on Bitag’s website. Episodes of I Travel Pinas are uploaded on Bitag’s YouTube page, with some videos bearing the watermark “property of Bitag Media Unlimited Inc.”

The questions are: How did Bitag bag the project, and how are they paid for it?

Bitag could have won the contract either through DOT or PTV. If it was through DOT, it raises questions on conflict of interest since Tulfo and Teo are siblings.

The code of conduct and ethical standards says “public officials shall not dispense or extend undue favors on account of their office to their relatives.”

“Sorry we cannot talk about anything because there is a Palace investigation going on,” PTV General Manager Dino Apolonio told Rappler in a text message on Monday.

This transaction indicates a government to government project between the DOT and PTV, so we checked the Philippine Government Electronic Procurement System (Philgeps) for bid and award notices of either DOT or PTV on I Travel Pinas, but nothing came up.

I Travel Pinas started airing on PTV in March 2017, and Bitag’s YouTube account started uploading episodes as early as March 14, 2017. Yet, Bitag Media registered on Philgeps only on January 25, 2018. Its status is active but nothing turned up for Bitag when a query on the database was made for any award to it.

Likewise, I Travel Pinas is not mentioned in over 88 notices of PTV, or 1,158 notices of the DOT main office (regional offices excluded), as well as in the 215 notices of the PCOO posted on Philgeps from July 2016 to March 2018.

PTV and DOT did not upload their summaries of awarded contracts in public bidding, which is typically expected of agencies under the transparency seal.

De Castro, who narrates the show and appears to join field shoots, said in April 2017 that the DOT spends around P200,000 per episode or P9.6 million a year. De Castro said it is cheaper than most travel shows.

De Castro said I Travel Pinas was the idea of Presidential Communications Operations Office or PCOO Secretary Martin Andanar. PTV is an attached agency of the PCOO.

Teo, Andanar, and Tourism Assistant Secretary Ricky Alegre have not responded to Rappler’s requests for comment.

Typically, government contracts should undergo public bidding. The Bids and Awards Committee (BAC) of the agency receives, rates, and approves the bids.

If the Philgeps mandate is to be religiously followed, this process should be done and reflected on the database.

But there are government contracts that are exempt from bidding. These are called “negotiated procurements”. Under this scheme, the agency can directly negotiate a contract with a supplier, but only if it meets certain conditions.

Generally, these are the conditions set by Republic Act 9184 or the Government Procurement Law:

Bitag started doing business in 2002, but became a corporation only on July 22, 2016, according to its Securities and Exchange Commission (SEC) papers.

It describes itself as a content provider. In media industry parlance, they are called block-timers.

Block-timers are independent media companies that produce their own shows, then pay a channel or station for airtime.

Based on Bitag’s list, they have 7 block-timers airing on PTV, including I Travel Pinas and Kilos Pronto.

I Travel Pinas and Kilos Pronto are the two shows that raise questions.

Block-timers produce their own shows at their own cost. They also pay the channel for airtime. They profit from their sponsors who pay so that their content is aired on the show, on the channel. Sponsored content is either the main show, or commercials within the show.

Media industry sources say there are some agreements that call for a profit-sharing scheme when the channel helps bag commercials for the block-timer.

It prompts questions on how Bitag could have earned from I Travel Pinas when it is a show that is supposedly a government to government (DOT to PTV) project.

I Travel Pinas came up once in the COA report.

It turns out that the DOT paid PTV P28.125 million for that period. Of that amount, PTV deducted P4.285 million for commercials for the first quarter, and P650,000 for the cost of airtime of I Travel for 13 weeks.

What remained was P22.089 million that they then paid Bitag. The COA report said: 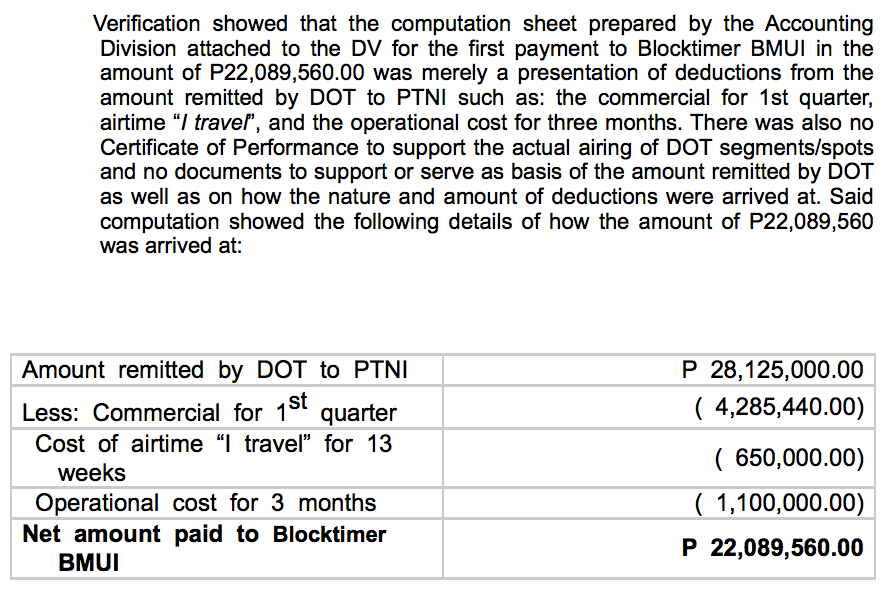 As for Kilos Pronto, COA said the show earned P60 million from advertisement placements of the DOT.

As mentioned by COA, the DOT specifically required PTV to place tourism advertisements on Kilos Pronto.

“Review of the [Memorandum Of Agreement] between DOT and [PTV] showed that there was no provision requiring [PTV] to remit to Blocktimer [Bitag] collections from DOT for the segments/spots aired within the program, ‘Kilos Pronto,’” state auditors said in the findings and recommendations section of their 2017 audit of PTV.

Though there were no provisions to remit, vouchers showed PTV paid P60 million to Bitag for the ad placements.

Lack of supporting documents led COA to flag the payment, saying that the validity and legality of the payments “could not be ascertained.”

A former state prosecutor who talked to Rappler on condition of anonymity said the COA findings could point to two violations:

“Jurisprudence shows us that if there is no bidding, there is a case. All procurement by the government should be done through public bidding,” the former prosecutor said.

Malacañang is currently investigating PTV and the Bitag deals that involve the DOT.

Presidential Spokesperson Harry Roque said on Monday that Duterte has yet to react to the recent announcement that the Tulfos are willing to return the P60 million.

(No one is saying it was stolen. Some say it’s nepotism. Some say it’s a violation of anti-graft. But there are mixed signals because the Supreme Court has a decision on that.) – Rappler.com