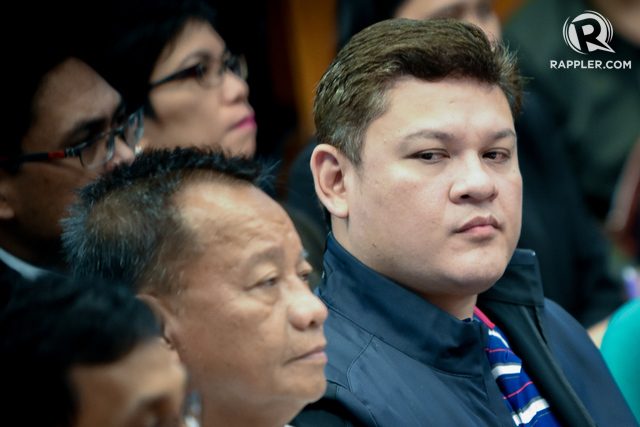 Morales answered a question at a justice forum on Tuesday, May 8, about the termination of a bank investigation involving President Rodrigo Duterte, saying it has been “closed and terminated without prejudice to another investigation if warranted.”

Morales looked at the table of her deputies for confirmation and said: “It’s validated by the investigator.”

When asked to clarify later in an ambush interview who among the first family she was referring to, Morales said, “Sabi nila yung Vice Mayor (They said the vice mayor).”

When asked if it was Paolo Duterte, Morales said “yes”.

Morales refused to answer further questions on what the investigation on Paolo Duterte is all about. She also didn’t answer if it has something to do with the terminated bank investigation involving the President, and whether Paolo remained part of the case.

But a list obtained by reporters shows that as of January 12, 2018, there are 5 docketed cases against Paolo, including an ill-gotten wealth case.

Of the 5 docketed cases, there are two cases for graft that are criminal in nature, there are two administrative cases, and one forfeiture case or the ill-gotten wealth case.

It is unclear if they all stem from the same issue, and if there are cases which have been dropped or resolved since January.

What is certain is there is still an ongoing investigation, as confirmed by Morales.

When asked about the cases on the list, Morales just reiterated that she has already inhibited.

Paolo resigned as vice mayor on December 25, 2017, citing family problems and the issue of  P6.4-billion smuggled shabu that implicated him and his brother-in-law Manases Carpio. On May 2, the Office of the Ombudsman’s special panel cleared Paolo and Carpio from the shabu case.

The shabu case is not part of the list because the shabu investigation against Paolo and Carpio never reached the preliminary investigation stage.

Duterte had earlier said he would resign from the presidency if any of his children are involved in corruption. – Rappler.com