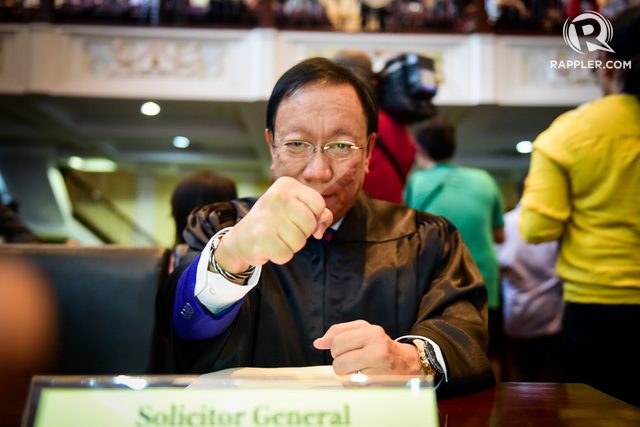 Facebook Twitter Copy URL
Copied
'This decision makes the Solicitor General the most powerful official in the bureaucracy, even more powerful than both the House of Representatives and the Senate insofar as the removal of impeachable officers is concerned,' says Senator Franklin Drilon

“This decision has opened a bottomless pit of power for SolGen,” Drilon said in a statement on Friday, May 11, after the SC voted 8-6 to grant Solicitor General Jose Calida’s quo warranto petition seeking to nullify Sereno’s appointment. (READ: After ouster as CJ, Sereno says ‘the fight has just started’)

“With this decision, however, the power to remove an impeachable officer, including Supreme Court justices, heads of constitutional offices, and even the President is, by implication and in effect, made available to the Solicitor General by way of a quo warranto petition,” said Drilon.

“Hence, this decision makes the Solicitor General the most powerful official in the bureaucracy, even more powerful than both the House of Representatives and the Senate insofar as the removal of impeachable officers is concerned,” he added.

Drilong said he “totally disagrees” with the SC ruling as he believes the only “remedy on erring constitutional officers like the Chief Justice is a conviction in an impeachment proceeding.” (READ: Sereno ouster ‘brazenly tramples on’ the Constitution – Robredo)

“From the very start, we have warned that the granting of this quo warranto petition against the Chief Justice is a very slippery slope. Now we have entered into a very dangerous situation because all officers who are removable only by impeachment can now be removed through a quo warranto proceeding,” said Drilon.

“It is a very sad episode in our political life. As an officer of the court however, I respect the decision of the Supreme Court but I register my objection,” he added.

Calida, however, believes the ouster of the Chief Justice is the “epitome of its exercise of judicial independence.”

Other senators slammed the decision, calling May 11 a “black day for justice.” – Rappler.com