BBL needs a push from Duterte to become law before SONA 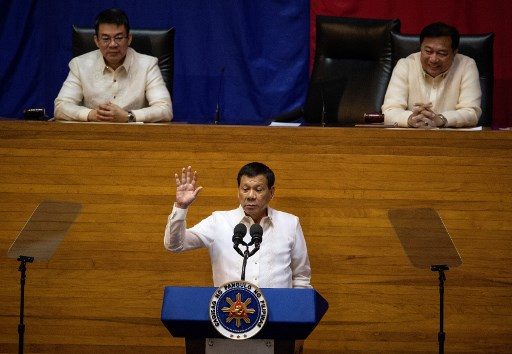 MANILA, Philippines – President Rodrigo Duterte’s actions in the next two weeks will test his proclaimed commitment to get the proposed Bangsamoro Basic Law (BBL) passed before his 3rd State of the Nation Address (SONA) in July. (READ: Lawmakers tell Duterte they’ll pass BBL by end of May)

Congress has 6 remaining session days to meet Duterte’s deadline. The schedule is ambitious but doable if Duterte will do two things – push his allies to fast-track deliberations and then certify the measure as urgent.

Senator Juan Miguel Zubiri, chairman of the Senate sub-committee on the BBL, said the Senate will pass the measure on 3rd and final reading on May 23.

It’s the House schedule that is problematic. House Majority Leader Rodolfo Fariñas said the chamber can get it passed on 3rd and final reading on May 30.

May 30 is the last session day of the 2nd Regular Session of the 17th Congress. This means there is no time for two more steps necessary to submit the law for Duterte’s signature before his SONA.

What is the legislative process? After approval on 3rd and final reading, bills go through bicameral conference committee meetings to reconcile the versions of the two legislative chambers. Finally, the reconciled bill is ratified in plenary by both houses.

In a letter to lawmakers dated a April 2, 2018, Presidential Legislative Liaison Office  chief Adelino Sitoy said Duterte wanted Congress to get the Bangsamoro law ready for signing before it adjourns sine die on June 2.

The lawmakers will go on a 6-week recess and will not return until July 23, the first session day of the 3rd regular session, when Duterte will deliver his 3rd SONA.

Why the need for Duterte to certify BBL as urgent? In the Senate, the BBL is pending second reading approval. (READ: BBL passage by end of May? ‘We’ll still give it a try,’ says Pimentel)

Zubiri’s timeline assumes that Duterte will certify the BBL as urgent next week, a move that will dispense with the necessary 3-day gap between the second reading and third reading bill approval.

He will need to fast-track the interpellations, which could become a challenge. Six senators so far have said they will interpellate Zubiri.

“We’re trying to pass it – if we get a certification by Wednesday. Mukhang matagal diyan kay (It may take time to hear) Senator Ralph [Recto] and Senator [Franklin] Drilon. I will ask the others to address their individual amendments during the committee amendments,” Zubiri told Rappler in an interview on Tuesday, May 15.

Zubiri said he’s counting on the help of other administration allies to help him fast-track the process.

Who may delay passage? Aside from Recto and Drilon, other senators who said they will interpellate Zubiri are Senate President Aquilino Pimentel III, and Senators Francis Pangilinan, Joel Villanueva, and Manny Pacquiao.

“I don’t want the BBL to suffer the same fate as the MOA-AD, during the time of former president Gloria Macapagal-Arroyo, which the Supreme Court declared unconstitutional,” Drilon said.

The SC decision on the Memorandum of Agreement on Ancestral Domain triggered violence in Mindanao.

Is the House committed to pass BBL? The House joint committees on local government, Muslim affairs, and peace, reconciliation, and unity approved last week House Bill (HB) No. 6475 without amendments.

It will go to plenary for second reading deliberations.

Fariñas said the all-member caucus will allow all the lawmakers to push their proposed amendments. “Of course, they will be heard. But not necessarily approved, ‘di ba (right)?” he said.

There are two things the House can do if it intends to meet Duterte’s deadline – fast-track deliberations or adopt the version Senate will pass on May 23 to dispense with the bicameral conference committee meetings altogether.

What happens if Congress misses the deadline? It’s not the end for BBL if Congress fails to meet Duterte’s deadline. The seliberations may continue in the 3rd regular session of the 17th Congress.

However, the 2019 elections will loom over Congress by then. It’s traditionally harder to get things done during this time because many senators and most congressional representatives would be on the campaign trail.