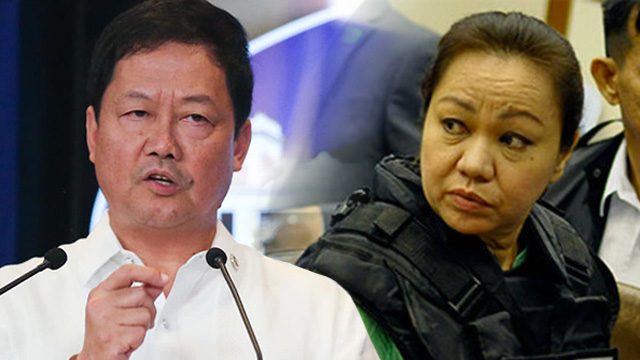 Napoles’ provisional coverage in the Witness Protection Program (WPP), granted to her by resigned justice secretary Vitaliano Aguirre II, expires on Saturday, May 26.

“Secretary Menardo Guevarra issued today a letter to Janet Lim Napoles, through her counsel, giving notice of the termination of her provisional coverage under the Witness Protection Security and Benefit Program (WPSBP), effective May 25, 2018,” the Department of Justice (DOJ) said in a statement released on Friday.

Three divisions of the anti-graft court Sandiganbayan had dismissed Napoles’ appeals to be taken to a DOJ safehouse. She is currently detained at Camp Bagong Diwa in Taguig, where her lawyers claim she has been subjected to alleged threats and harassment. The Court said the supposed proof of these threats was insufficient.

“As there has been no further claim of threats to her personal security inside Camp Bagong Diwa, the Secretary of Justice has found no reason to extend further Ms’ Napoles provisional coverage under the Witness Protection Program,” the DOJ said.

Meanwhile, Presidential Spokesperson Harry Roque said the Palace backed Justice Secretary Guevarra’s decision. “We support DOJ sec decision and agreee that Lim is not least guilty whose testimony is not indispensible and can be testified upon by other witnesses,” said Roque.

The removal of state protection is a big blow to her legal strategies crafted by influential lawyer Stephen David who has direct links to Malacañang.

(It would have been better for Mrs Napoles to speak up, so we would know who were involved in the [Priority Development Assistance Fund scam])

Napoles was admitted to the WPP on the promise that she would name and expose more personalities in the pork barrel scam, targeting allies of the Aquino administration.

Aguirre had also opened a reinvestigation, but the status of that is unclear as of now because the head of the panel, former undersecretary Antonio Kho, has resigned, following Guevarra’s revamp of the DOJ. – Rappler.com