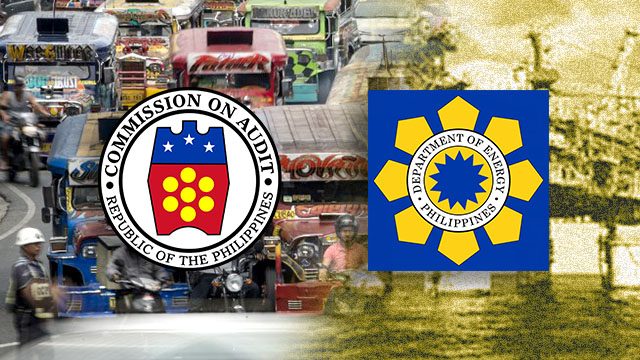 Facebook Twitter Copy URL
Copied
(UPDATED) Based on a COA report, it's not clear how the P300 million was used, and how many cards were loaded with cash

MANILA, Philippines (UPDATED) – The Pantawid Pasada program of the Department of Energy (DOE) has yet to be audited 7 years after it was first implemented, the latest Commission on Audit (COA) report showed.

In 2011, the DOE rolled out Pantawid Pasada, or Public Transport Assistance (PTA) program with the transportation, finance, and interior departments, to cushion the high fuel prices caused by the Middle East oil crisis.

COA had flagged DOE about the pending review of the P300-million program, but the letters were left unanswered for several years.

In its 2017 report, COA said that DOE “took no action” to submit the necessary documents to evaluate the fuel subsidy program. The documents had been pending since 2013, the last time funds were allocated for the program.

Among the requirements were the fund utilization report, fund loading by the Bank of the Philippine Islands (BPI), and the inventory of the cash cards given to jeepney drivers.

This means that it’s not clear how the P300 million was used, and how many cards were loaded with cash.

“Initially, COA reported that there was no major finding except that they needed supporting documents from BPI,” the bureau said.

The pending documents, according to DOE, cannot be submitted because of a system failure. These had been pending since 2013.

“BPI submitted already the fund utilization report but COA requested a detailed utilization per card which BPI system cannot immediately act [on] because their system crashed,” they said.

Under Executive Order No. 32 in 2011, the program had an initial funding requirement of P450 million. Of this amount, P300 million of went to DOE while the other P150 million went to the interior department.

Funds for the program were sourced from its earnings from the Malampaya Deep Water Gas-to-Power project. (READ: How the P38-billion Malampaya fund was misused)

DOE partnered with BPI and the Land Bank of the Philippines (LBP) for the roll out of cash cards to be given to jeepney drivers.

These cards were used as debit cards, with an initial load of P1,050 and reloaded P1,200 to buy petroleum products.

“[W]e could not conduct an effective assessment of the program’s progress of implementation as at year end. Likewise, the actual amount of benefits availed of by the PUJ (public utility jeepney) drivers and projects’ fund balance could not be accounted for,” COA said.

By the end of 2013, DOE claimed that the program has a cash balance of P366,094.01. But COA said it “cannot be fully ascertained” due to the non-submission of bank reconciliation statements.

COA said the action is “contrary” to a circular that orders the Chief Accountant to prepare a monthly bank reconciliation statement based on the on statements sent by the bank; and to correct or adjust entries for discrepancies. These must be submitted to the resident auditor within 15 days of the month’s end.

According to the 2014 audit report, the bank reconciliation statement and copies of bank statements covering January 1, 2013 to December 31, 2014 were eventually submitted. However, hard copies of the fund utilization report, fund loading by BPI, and the inventory of cards were yet to be submitted.

Despite the pending review of the program, the Department of Transportation (DOTr) is considering to revive Pantawid Pasada.

Talks on fuel subsidies are currently being raised due to the rising fuel prices brought about by the tax reform law.

But DOTr said the fuel subsidy program will not be used for “political purposes,” alleging that the irregularities in the implementation of the past program was politically motivated. (READ: DOTr to revive unaudited fuel subsidies program for jeepney drivers)

Meanwhile, transport groups were not sold on the idea of reviving the program, as it was deemed to be a “cheap dole out” where “drivers did not benefit much.” – Rappler.com