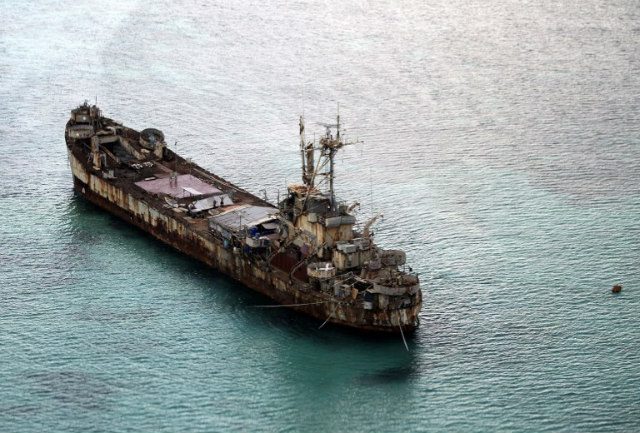 Facebook Twitter Copy URL
Copied
Foreign Secretary Alan Peter Cayetano does not categorically call it a form of 'harassment' in the West Philippine Sea, as he prefers to label it an 'incident'

In a statement on Wednesday, May 30, Magdalo Representative Gary Alejano said the alleged harassment in Ayungin Shoal happened on May 11.

Philippine Foreign Secretary Alan Peter Cayetano on Wednesday, however, did not categorically call it a form of “harassment,” as he preferred to label it an “incident.” He said the Philippines, in any case, has filed a diplomatic protest.

Citing his sources from the Department of Foreign Affairs (DFA), Alejano explained that “the Armed Forces of the Philippines (AFP) has lodged a complaint with the DFA” regarding this recent case.

He said the Chinese Coast Guard and the People’s Liberation Army Navy (PLAN) “challenged and harassed” the Philippine Navy.

The Philippine Navy was then conducting “a reprovisioning mission for our troops” at the BRP Sierra Madre in Ayungin Shoal.

“When the Philippine Navy ship launched a rubber boat to resupply BRP Sierra Madre, a chopper of PLAN hovered in a close and dangerous distance. The PLAN chopper was so close that seawater splash entered the rubber boat,” Alejano said.

“Before, it was only CCG that was challenging and harassing our troops. Now, the CCG was already accompanied by the PLAN. This is a clear threat to our security forces by no less than the Chinese Coast Guard and Navy which obviously requires condemnation from our end,” added Alejano.

Ayungin Shoal is a tiny group of islets and reefs about 200 kilometers (120 miles) northwest of the Philippine island of Palawan, the nearest major landmass. This is where a handful of Marines living on a grounded World War II-era ship serve as the Philippines’ last line of defense against China’s efforts to control the West Philippine Sea.

In his statement about the recent Ayungin Shoal case, Alejano then criticized Cayetano for supposedly not filing a diplomatic protest against China’s moves.

“Secretary Cayetano should not feign ignorance and act clueless as if his office is not receiving pertinent information,” Alejano said.

Alejano also brought up this alleged harassment when he spoke in a hearing at the House of Representatives regarding the West Philippine Sea.

“While we are talking and we want to have a good relationship with China, why are we being harassed on the ground?” Alejano asked in a mix of English and Filipino.

Cayetano acknowledged this incident at the House of Representatives hearing on Wednesday.

He said this is the only incident “on a different level” for the past two years.

Other instances only involve China “telling us on the radio that ‘this is Chinese territory, you are entering it,'” while the Philippines responds, “You are in Philippine territory.”

“We are dealing with that. We filed a protest regarding that. We had a meeting. The President had strong instructions,” Cayetano said, adding that he preferred to give more details in an executive session.

In an interview with reporters before the executive session, Cayetano was also asked about this reported harassment.

“Eh ang problema naman kasi sa mga kritiko, tingnan ka lang ng Chinese, harassment na eh (The problem with critics is that if the Chinese only look at you, they consider it harassment),” Cayetano said.

A journalist later asked Cayetano regarding the May 11 incident: “You don’t consider it harassment?”

The Philippines’ top diplomat answered, “That’s what we don’t discuss in public.” – with reports from Agence France-Presse/Rappler.com