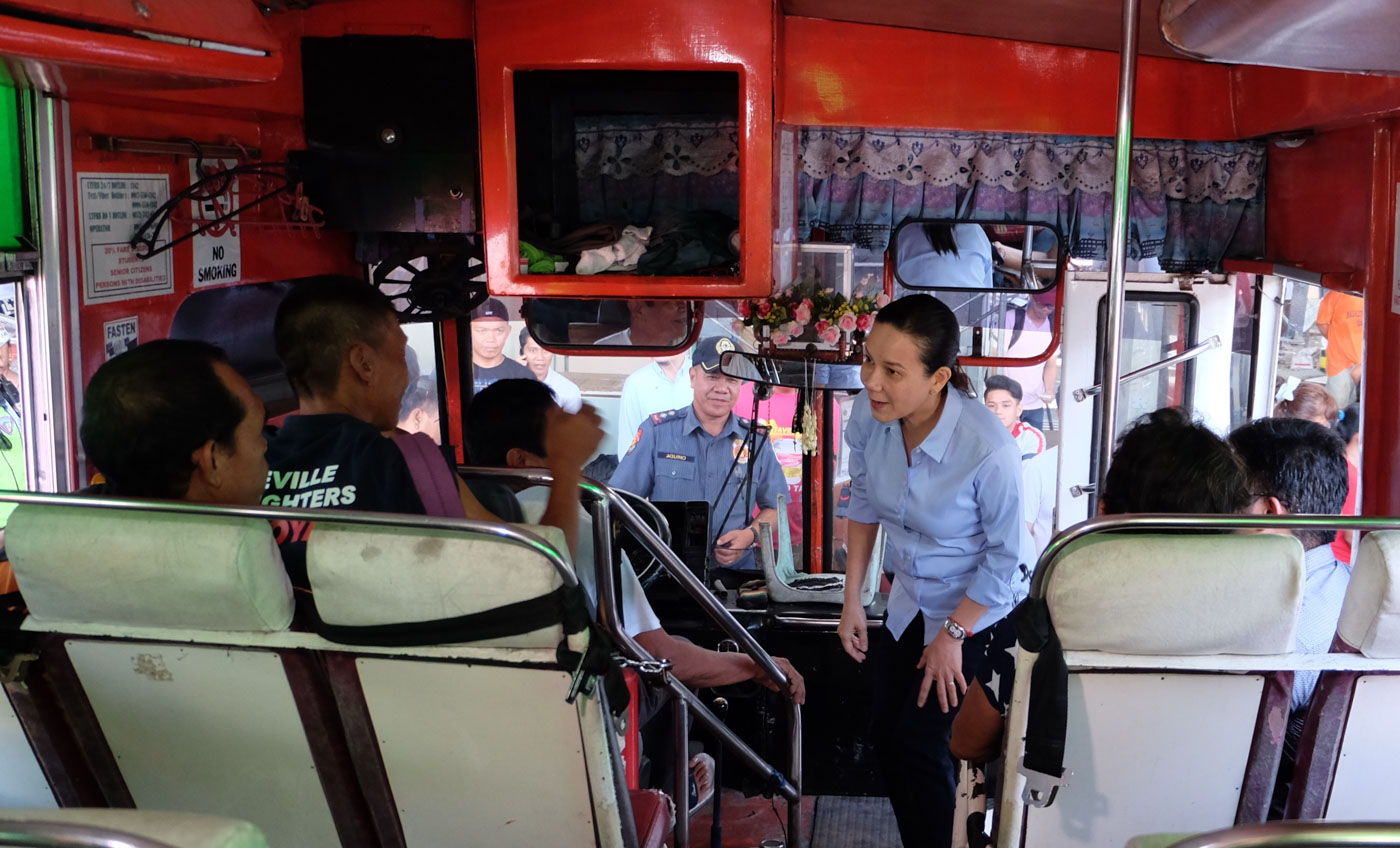 LEGAZPI CITY, Philippines – Senator Grace Poe has called for the speedy release of government subsidies provided under the tax reform law to give relief to families and sectors reeling from high prices due to the controversial measure.

Poe made the call after she, along with Senator Paolo Benigno “Bam” Aquino IV, held a public hearing on the impact of Republic Act 10963 or the Tax Reform for Acceleration and Inclusion (TRAIN) law at the Sangguniang Panlalawigan of Albay (SPA) hall on Friday, June 1.

In an interview with reporters after the hearing, the chair of  the Senate committee on public service  said the concerned government agencies must immediately implement the social measures provided under TRAIN, and that these should be effective retroactively.

“Ang masasabi ko sa DOF (Department of Finance), nasaan ang pinangako ninyo na nasa batas din na dapat magbigay rin ng mga vouchers para makatulong nga (Let me ask DOF, where are the promises you made, that are in the law itself, where you’re supposed to give vouchers to help [those affected])?” Poe said.

She said TRAIN is supposed to help the people, especially the poor, through job-generating infrastructure projects to be funded by proceeds from the revenue measure. But if the law itself is beginning to hurt its supposed beneficiaries, the government should reconsider its priorities, she added.

“So dapat tulungan muna natin ang ating mga kababayan. Kung merong subsidiya, ibigay na agad (So we should help our people first. If there are subsidies, release them right away),” she said.

Poe hoped that the government would act on this now “because the guidelines have not been released yet.”

“Let us hear the cry of our people [regarding the] TRAIN Law and try to arrange a possible system of aid,” she added.

Section 82 of TRAIN provides tools for goverment to mitigate the impact of the law.  Poe cited  fuel vouchers for jeepney franchise holders; fare discounts for minimum-wage earners and the poorest of the population; discounted National Food Authority rice; and free skills training.

She said a 10 million low-income households will each receive P200 per month this year and P300 per month in 2019 and 2020, as government subsidy to ease the impact of TRAIN.

However, based on government data, only 4.4 million families had received the targeted cash transfers.

In the hearing, Poe said, 5 months into the implementation of TRAIN, Filipinos are feeling the pinch of relentless price increases caused in part by higher taxes on fuel, vehicles, and sweetened beverages.

Poe said that the impact of TRAIN and higher oil prices in the world market should prompt the government to immediately provide safety nets to the poor and affected sectors.

“It’s in the hands now of the government to make sure that those subsidies are distributed on time to our countrymen so that the poorest who are affected by this will be given a reprieve,” she said.

The TRAIN law, which overhauled the income tax regime and increased the ceiling for tax-exempt salaries, imposed a P3-tax for every liter of kerosene, P2.50 for every liter of diesel and bunker fuel, and P1 for every kilogram of liquefied petroleum gas.

Poe made the call to the government as LPG prices price increased by as much as P3.40 per kilog, while fuel prices have increased for 3 consecutive weeks. She said that fare discount is also necessary as school opening neared.

Albay 2nd District Representative Joey Salceda,  a former economic adviser and one of the proponents of TRAIN, said the new law only contributed 0.4 percentage point to inflation in April.

Salceda, also a former Albay governor, said that about P28 billion is appropriated this year for various measures to mitigate the impact of TRAIN.

Albay Governor Al Francis Bichara also said that economists in Manila did not see the domino effect and adverse impact of the law in terms of prices of basic commodities.

Transport and consumer groups and student leaders who attended the hearing said the Department of Transportation has not yet discussed with them the possible subsidies they could get under TRAIN.

During the hearing, it was discussed that around P977 million is earrmarked for the Pantawid Pasada Program this year, which would be distributed to some 179,000 jeepney franchise holders.

Asked for her proposed safety nets to help the public cope with the impact of TRAIN, Poe told Rappler that fuel vouchers should be distributed immediately.

“Accelerate the distribution of money for conditional cash transfer because there are some percentage of the population not receiving it so somehow big thing. And if there is any chance to amend TRAIN…because now we are at 4%(inflation), with predictions of 6%. That’s too high. The public will be completely affected, even the middle class,” she said. – Rappler.com