Jun 8, 2018 2:23 PM PHT
Lian Buan
Facebook Twitter Copy URL
Copied
(UPDATED) The Court Of Appeals says the government must request Indonesia to allow the incarcerated Veloso to go to the Philippines and testify in courts here 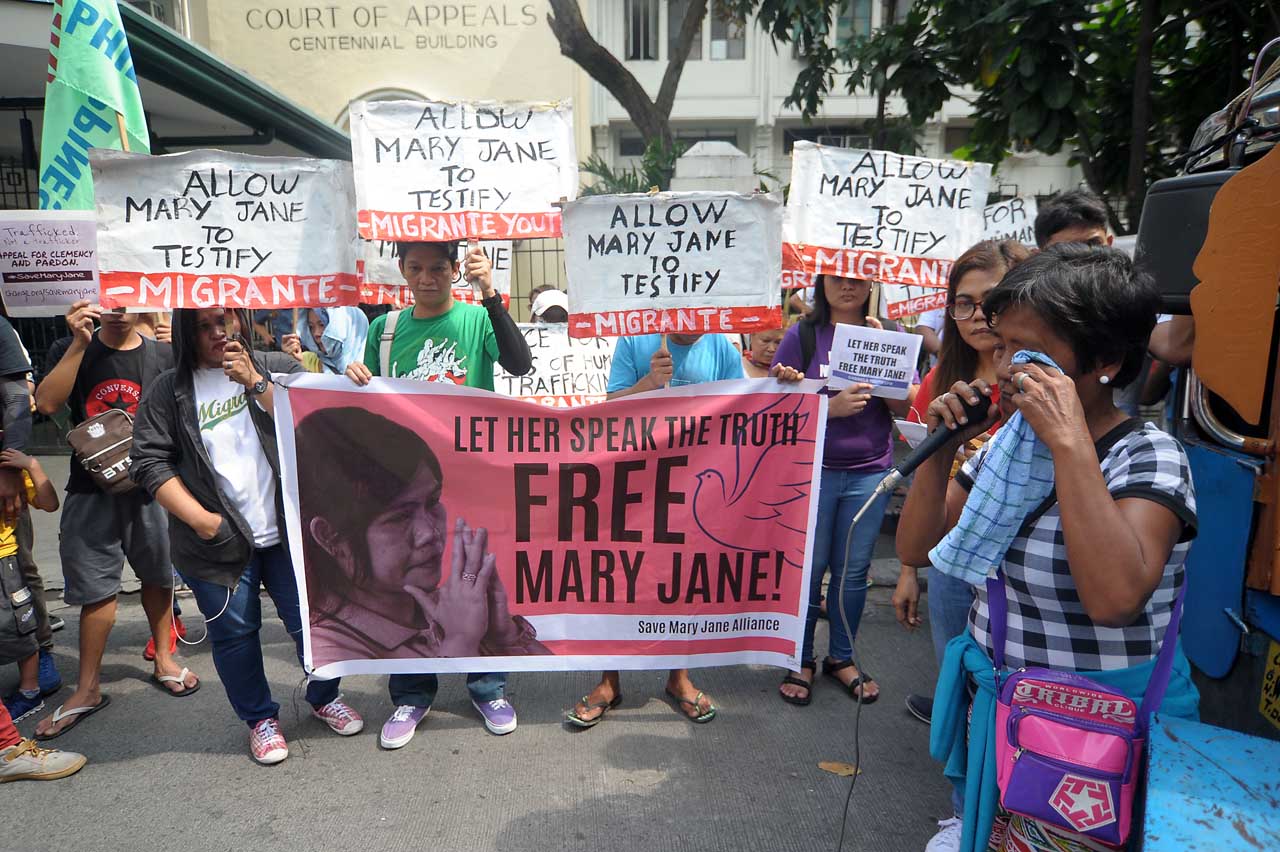 The CA’s former 11th Division denied Veloso’s Motion for Reconsideration, and said that if the OFW’s testimony is absolutely necessary, the Philippine government must convince Indonesia to let her come home and testify in the court there.

The resolution was penned by Associate Justice Ramon Bato, with concurrences from Associate Justices Manuel Barrios and Renato Francisco, dated June 5, but released to media only on Friday June 8.

The National Union of People’s Laywers (NUPL) said they will appeal to the Supreme Court.

“We shall legally intervene as private prosecutors and will raise it to the Supreme Court. We shall also revisit and exhaust other options and channels to ensure that Mary Jane is rightfully saved from the gallows on legal, political and humanitarian grounds,” the NUPL said in a statement.

What is the case about? Veloso is a single mother of two, who initially flew to Malaysia in search of a domestic job but ended up being caught in Indonesia with 2.6 kilograms of heroin hidden in her suitcase lining. She claims she was used as a drug mule.

She was convicted in Indonesia for illegal drugs and put on death row. Meanwhile, she filed an illegal recruitment and trafficking case against Sergio and Lacanilao.

The trafficking case is pending before the Nueva Ecija Regional Trial Court (RTC), and was the reason why the Indonesian government spared Veloso from the death row. After pressure from human rights and labor groups, Indonesia allowed the Philippine case to proceed first.

Veloso’s lawyers hope that the Philippine case will bolster her defense that she was just duped, which will then boost her bid for freedom in the Indonesian drug charge.

But to do that, Veloso must testify in the case. The problem is, she is detained in Indonesia. The Nueva Ecija court allowed Veloso to testify through written interrogatory to be taken at her detention cell in Yogyakarta, Indonesia.

The CA blocked it, first in December 2017, and then again with this recent resolution.

What did the CA say? The CA said that Sergio and Lacanilao as the accused are given the constitutional rights to meet their accusers face to face.

It is contained in Section 14(2), Article III of the Constitution.

“Cororarilly, the right of the accused to confront and cross-examine the witnesses against him at the trial is guaranteed under Section 1(f), Rule 115 of the Revised Rules on Criminal Procedure,” the resolution said.

The CA insisted that it is only upholding the judiciary’s role as “the ultimate guardian of the Constitution.”

Could there have been a compromise? Solicitor General Jose Calida helped Veloso and filed on her behalf the motion for reconsideration.

Calida appealed to the CA to consider Veloso’s “extraordinary situation”.

Calida said that Rule 23 of the Rules of Criminal Procedure allows “the testimony of any person [which] may be taken by deposition upon oral or written interrogatories.”

Veloso’s lawyers at the NUPL said that the prosecution can send the questions to the Nueva Ecija court.

The Philippine embassy in Indonesia can then read the questions to Veloso and record her answers word-for-word. The Nueva Ecija Judge and Indonesian officials can observe.

Calida said the CA should “read laws not as estate mausoleums of texts, but as living, breathing and evolving documents.”

How did the CA respond? The CA said it “merely resolved the issue of whether the Judge gravely abused her discretion in allowing the taking of deposition by written interrogatories of prosecution witness Mary Jane Veloso.”

The CA said its decision does not stop the Nueva Ecija judge from receiving evidence. The CA pointed out that aside from Veloso, the prosecution has listed 11 other people as witnesses including Veloso’s parents Celia and Cesar.

“Finally, assuming arguendo that the testimony of Mary Jane Veloso is absolutely necessary or indispensable to prove the guilt of the petitioners in the consolidated criminal cases, under the circumstances obtaining, through proper diplomatic channel, the government should convince Indonesia to allow Mary Jane Veloso to testify in Philippine courts,” the CA said.

The NUPL said: “A nitpicking purely legalistic approach devoid of any social context or divorced from concrete reality serves as blinders to a simple fact: will the testimony through the only allowable legal mode of a Filipino mother indefinitely detained on death row in a foreign land decisively and finally help answer or give  light to the question of whether or not she is a victim or villain?” – Rappler.com