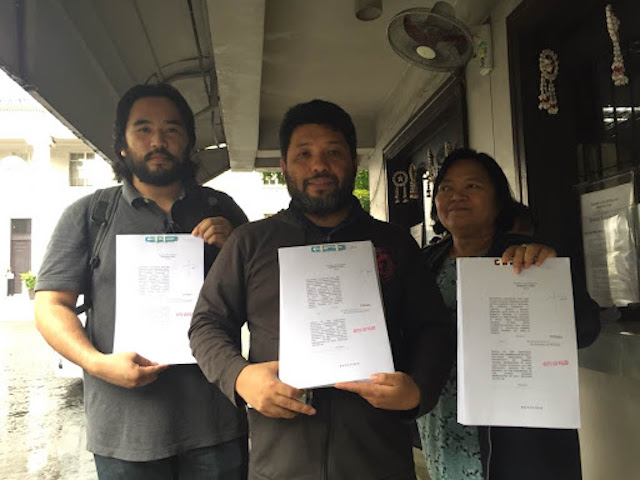 The PCICC is hoping that their petition be consolidated with an earlier petition filed by minority senators, and that they will be included in the oral arguments on July 24.

President Rodrigo Duterte withdrew the Philippines’ membership in the ICC in March as a reaction to the preliminary examinations being conducted against him by the ICC Prosecutor in relation to his bloody war on drugs.

Like the minority senators, the PCICC said that the executive branch cannot unilaterally withdraw from the ICC without getting the Senate to sign off on it first.

In justifying their stake in the issue, the PCICC said they were “deprived of their right to take part in the public deliberations on the same hearing that would have taken place had the Upper House been engaged for the purpose.”

Presidential Spokesperson Harry Roque used to be the co-chairperson of the PCICC.

Representing the PCICC in its petition are lawyers Romel Bagares, Roque’s chief of staff when he was a partylist representative; Ray Paolo Santiago, the PCICC’s chairperson; and Gilbert Andres from the Center for International Law, a firm co-founded by Roque.

Here are the PCICC’s arguments:

The Philippines signed the Rome Statute in 2000 under former president Joseph Estrada. But the treaty didn’t go into full force until 11 years later, in 2011, when the Senate passed Resolution No. 546 which formally admitted the country into the rules of the statute.

For the PCICC, Duterte’s withdrawal cannot scrap Resolution No. 546, which they said, remains binding.

“No act of the Executive may invalidate this legislative act. It may only be recalled, cancelled or voided by the Senate itself (unless this Honorable Court, on a petition to void it, declares it unconstitutional and illegal),” the petition said.

The petition highlighted Section 21, Article VII of the Constitution, which states: “No treaty or international agreement shall be valid and effective unless concurred in by at least two-thirds of all the Members of the Senate.”

The silence of the provision on the withdrawal is now being used by government allies to say the Senate’s concurrence is not needed when terminating a treaty.

But the PCICC said the provision “prescribes a shared duty towards that end between the Executive and the Legislative branches of government.”

2. It is a well-settled principle in international law

Under a principle called the peremptory norm or jus cogens – which means a compelling law that cannot be violated – a country may not pass a law or an order that would violate a compelling law. In this case, the PCICC said the Rome Statute is jus cogens in character.

“The Philippine is bound by customary international law to abide with the Rome Statute, which embodies and codifies such norms and principles from which there can be no derogation, which in fact are jus cogens in character,” the PCICC said.

The PCICC said that this principle is further strengthened by the fact that the Philippine Constitution committed to adopt “generally accepted principles of international law.”

Section 2, Article II of the Constitution states that: “The Philippines renounces war as an instrument of national policy, adopts the generally accepted principles of international law as part of the law of the land and adheres to the policy of peace, equality, justice, freedom, cooperation, and amity with all nations.”

Though the Philippines signed the Rome Statute in 2000, there was a delay in its ratification mainly because in 2005, the Supreme Court ruled in Pimentel vs Executive Secretary that the executive does not have a “ministerial duty” to enter into a treaty.

“The President is vested with the authority to deal with foreign states and governments, extend or withhold recognition, maintain diplomatic relations, enter into treaties, and otherwise transact the business of foreign relations,” the SC said then.

The PCICC claims that this law finally paved the way for the Philippines to ratify the statute, which it did in 2011 under former president Benigno Aquino III.

Section 17 of the IHL says: “In the interest of justice, the relevant Philippine authorities may dispense with the investigation or prosecution of a crime punishable under this Act if another court or international tribunal is already conducting the investigation or undertaking the prosecution of such crime. Instead, the authorities may surrender or extradite suspected or accused persons in the Philippines to the appropriate international court, if any, or to another State pursuant to the applicable extradition laws and treaties.” (READ: ICC’s track record and what it means for Duterte and the PH)

Thus the PCICC said that the ICC Prosecutor’s preliminary examinations vs Duterte’s drug war adheres to the IHL on the principle of “reverse complementarity.” It means that there is a domestic law that recognizes the prosecutor’s act.

Duterte claimed that when the ICC prosecutor opened the preliminary examination, she violated the complementarity rule which basically states that the ICC shall only take jurisdiction of a case if the local justice system is unable to.

4. Non-publication of the Rome Statute does not merit a withdrawal

In his statement, Duterte said the Statute was void because it was never published on the Official Gazette or any newspaper of wide circulation, which is typically required of domestic laws before they become effective.

The PCICC went back to  Section 21, Article VII and said publication was never required by the Constitution for a treaty to become effective.

The PCICC also said the Rome Statute was basically published when the IHL was passed due to similarities in provisions.

“It will mean citizens, including Petitioners, will not have a ready recourse to any effective mechanism that used to be there when the Philippines was still a party to the Rome Statute, for redress against cases of impunity should their own government become unable or unwilling to prosecute such cases of impunity,” the petition said.

It added: “This may also have repercussions on foreign investors’ confidence in the reliability, predictability and integrity of our democratic institutions, for which reason it must be subject to Senate concurrence, so that every other possible negative ramification of such a withdrawal of international obligations may be precluded or addressed.”

In response to the additional petition, President Spokesman Harry Roque said, “We reiterate that the President is the chief architect of the country’s foreign policy. The Constitution makes no mention that concurrence of the Senate is necessary to validate the Philippines’ withdrawal from the International Criminal Court (ICC).”

“Again, this is not an issue that can be addressed by a certiorari. Hence, the courts must defer matters on foreign affairs to the Executive,” he added. – Rappler.com