Jun 14, 2018 2:37 PM PHT
Sofia Tomacruz
Facebook Twitter Copy URL
Copied
Assistant Secretary Nepomuceno Malaluan says the decrease is observed mainly among individuals aged 16 to 24, as many of those who returned to school after dropping out went back to senior high school 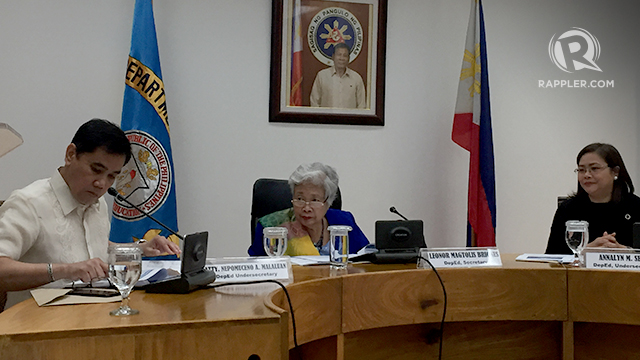 MANILA, Philippines – The Department of Education (DepEd) on Thursday, June 14, announced a decrease in the number of out-of-school youth from 3.8 million individuals in 2016 to 3.6 million in 2017.

Assistant Secretary Attorney Nepomuceno Malaluan said the decrease in out of school youth was observed mainly among individuals aged 16 to 24, as many of those who returned to school after dropping out went back to senior high school. (READ: Senior high school: No youth left behind?)

“Part of that reduction was really the clear positive impact of senior high school,” Malaluan said.

“Senior High School has improved the profile of school participation in the country,” Malaluan added.

Among both age groups, the main reasons cited for not attending school were the lack of personal interest, illness and disability, and the high cost of education or financial concerns.

In order to mitigate the number of students who drop out, DepEd said it would focus on strengthening its incentives to support school attendance such as continuing its feeding program, tuition subsidies programs, and alternative learning system.

In addition to this, Assistant Secretary G.H. Ambat also said DepEd would continue its drive to have out-of-school youth return to school by offering different modes of attending school such as through night school and its flexible self-pacing open high school program. – Rappler.com